In addition to painting the iconic curbs, Chevy Racing will donate $350, up to $50,000, to Making Strides Against Breast Cancer for every caution lap run during the Goody’s Fast Relief 500 on October 30. Last year the race saw 109 caution laps.

“What’s unique about Paint the Curbs is it’s like a precursor to the event weekend that’s coming up in a couple of weeks,” Jeff Chew, senior marketing manager for Chevy Racing, said. “So we want to one bring out the survivor group from the local community to join us and we want to make a splash in the local media, in the community and in the area about what’s coming. 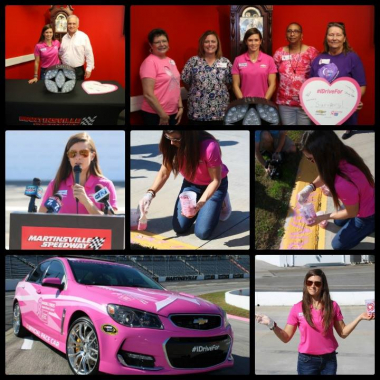 The whole Martinsville Speedway Paint the Curbs Pink program is so cool. It’s the only one I know of in the sport.”

Like most everyone, Patrick has a personal story about the importance of breast cancer awareness and research. Her story isn’t about her or even an immediate family member, but a high school classmate.

“I have a very good friend who, 10 years ago we were in our mid-20s, she was tested for the breast cancer gene, because it ran in her family,” Patrick said. “Her results were overwhelming and she decided to have a double mastectomy to take away the chance that she would develop breast cancer someday.

“Those kinds of things happen because of events like this. People like Chevrolet that donate so many millions of dollars, $6 million since 2011, that’s very, very cool. Those things help with research and everything. That is why my friend won’t have to worry about (breast cancer).”

For breast cancer survivors the day was filled with emotion.

“When you look at the effort that everyone makes towards helping me is awesome. It’s absolutely awesome,” Beverly Rakes, a breast cancer survivor said. “I’m one who doesn’t like attention and am just getting used to being called a survivor. It was October of last year that I got the diagnosis.”

“It’s wonderful,” April Hammock, a three year survivor, said. “I didn’t even realize they did all of that for breast cancer awareness. I had no idea they do the donations for each caution lap.”

And from a fan standpoint, Hammock was also grateful to get to spend some time with Danica.

“She was fun. I’ve never been that up-close-and-personal with her. I’ve seen her close and gotten to take pictures of her, but I’ve never gotten to talk to her.

“She’s great. She’s really down to earth. I liked getting to spend some time with her.”

In addition to donating money for caution laps, Team Chevy will donate $5, up to $500,000, to Making Strides Against Breast Cancer every time the hashtag #IDriveFor is shared on Instagram or Twitter.

The NASCAR Sprint Cup Series is in action Sunday with the Goody’s Fast Relief 500.

Adult ticket prices for the Goody’s Fast Relief 500 start at $45. Seats in the Bill France Tower are only $50.

Ticket prices increase the week of the race.

Last year, Jeff Gordon took home his ninth grandfather clock trophy and was the first driver to clinch a spot in the Championship Round of the Chase for the NASCAR Sprint Cup.

The Goody’s Fast Relief 500 is the first race in the Round of 8 of the Chase.

Tickets can be purchased by calling 1.877.RACE.TIX or online at www.martinsvillespeedway.com.

Man paints #3 on his Mustang; Leads police on a chase