Dennis Adcock has been the track’s director of operations since 2013. He will now continue to oversee all facility and maintenance operations for the famed superspeedway. 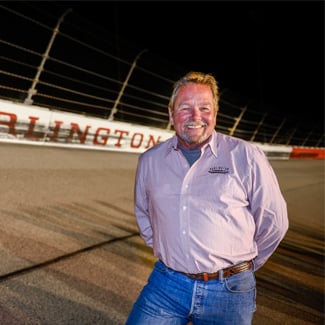 “Dennis Adcock has done a marvelous job for Darlington Raceway and is well respected in our industry,” Tharp said. “His promotion is reflective of his hard work, dedication and passion for the track Too Tough To Tame.”

“I appreciate the opportunity to serve as vice president for Darlington Raceway,” Adcock said. “Darlington Raceway is a special place for NASCAR and we’ve worked really hard to turn the facility into one that operates efficiently and enhances the fan experience on Labor Day weekends and beyond.”

Prior to Darlington Raceway, Dennis Adcock served for 14 years as a NASCAR official, primarily as garage supervisor for the NASCAR Camping World Truck Series. In that role, he was responsible for the overall operation of the garage and worked closely with the teams, tracks and other stakeholders.

He was also involved on the race team side of the business, having co-owned LAR Motorsports out of Nashville, Tenn. with drivers Casey Atwood and Jeff Purvis in 1995. He was also part of Steve Grissom’s 1993 NASCAR Busch Series championship team and served as a crew member for Jeff Gordon’s 1991 and 1992 campaigns for Bill Davis Racing.

A U.S. Navy veteran who served on naval submarines, Adcock has been married to his wife, Nancy, for over 20 years. He has two daughters and resides in Florence, S.C.

You can keep up with all of the latest news from Darlington Raceway at DarlingtonRaceway.com, on Facebook at Facebook.com/DarlingtonRaceway and on Twitter at Twitter.com/TooToughToTame. Fans are encouraged to post their Bojangles’ Southern 500 stories and memories at #TraditionContinues, #BojanglesSo500 and #SportClips200.