Everyone has an opinion on dirt track prep. Fans have their own ideas on which dirt surface provides the best type of racing. That conflict of opinion causes a lot of surface discussion and complaints.

Here’s a behind the scenes look to dirt track prep. Gary Risch is dirt guru for the World of Outlaws. He met with the guys at the Open Red podcast and shared insight into what he does to prep a track and what his overall goal is for dirt track surfaces.

When it comes to prepping a dirt track, there isn’t always such an ultra clear right or wrong answer. It’s more a matter of taste. Some fans want a tacky race track where dirt cars can show their full power.

Other fans want a dry slick track where power isn’t as important. You simply can’t put all the power down if there’s no grip in the racetrack. It’s slower but generally offers multiple grooves and side by side racing.

However, it’s a walking a fine line with dirt track preparation. Too slick and the track will begin to take rubber, usually in a single groove. One groove of rubber provides one groove of racing, no passing. Another problem can arise with a slick track, a problem to the fans, dust.

When it’s good they all told me what to do. When it’s bad it’s all me.

Who is Gary Risch? 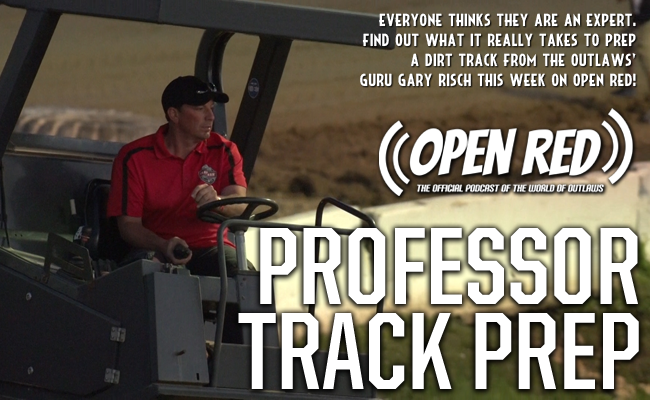 He’s the groundhog that spends all his time digging into dirt tracks across the country.

He’s the mind behind the dirt prep with the World Racing Group. He didn’t go to school for track prep. There’s not a dirt track prepping class at your college campus. He just watched and learned, picking things up as he went along.

You’ve probably seen his work via the DirtCar Nationals, Volusia Speedway Park, Syracuse Mile, the World of Outlaws World Finals, Oswego Speedway, The Dirt Track at Las Vegas or as the GM at Lernerville Speedway.

What type of dirt track surafce does Gary Risch Want?

A racy one. It’s not just a fast or slick answer for him, it’s both. He explained, “My goal. To have a good bottom and a good top and a slick middle. My whole goal is to make the track equal.” If you see Gary working the track in the course of the night it’s usually because the top’s too fast or the bottom’s too fast.

What Does Gary Risch Do to Prep a Dirt Track?

In regards to the World Finals, “We’ve been watering the thing at night. Coming in and tilling it in the morning. Letting it dry out a little bit, crusting it, grading it, working the spots in, really manicuring it, getting the shape where we wanted it to.”

It’s not as simple as creating a slick or moist track. You also want the entire track to have the same surface. You don’t want wet spots and dry spots. “You try to get the places as equal as possible” as Gary Risch explained.

He said they had been touching up spots that were more and less moist than others days in advance. How do you tell? Much like a drivers steering wheel, it’s all by feel. They have to read the surface as they run the tractors. Sheeps foot are the tell tale sign of what spots need help, based on how deep they go into the track.

Sheeps Foot – It’s used to tighten up the race track. You use it to mix clay into the racetrack. The sheeps foot pounds the clay into the track and seals it in.

It also helps get moisture into the track surface. The sheeps foot creates holes in the dirt. Those holes then fill in with water when you run the water truck. It then seeps into the surface as the night goes on.

Like most tools available they can be used in alternative ways. You can use them a specific way to slick up the track or an alternative way to put moisture into the dirt racetrack.

Dirt track prep is an art and a science all in one. Mix in the weather gods and it’s a bit of a lottery on top of that.

In a major way… the rain, the sun and the clouds all effect your Saturday night dirt track race. Last years World Finals saw very little track prep, all due to weather. “We we’re just trying to get it in.” says the World of Outlaws Gary Risch.

He continued, “There wasn’t much track prep going on. It was holy crap let’s get this thing feasible to race on.” A boat load of rain took it was out of their hands. The goal became getting the show in, instead of taking time to create the desired racing surface. It was more about allowing fans to see some kind of racing. Instead of taking time to prefect the track, time was spent just to make it drivable.

It’s not just rain that can ruin the intended plan of execution, “Last week was the worst thing that ever happened. We had a full sun starting at 4:30 and the sprint car deal was late. We let the track sit for 25 minutes without anything on it. It’s the worst thing you could do to it.”

Sun dry’s out the track at rapid speed as Gary explained, “You might as well just shut it down right then because it crusts over and it slicks off and that’s where you get your dust. You have to have a little bit of slim on it. So, when the cars go out there, they can work that in.”

Unique Challenges for the World of Outlaws Track Prep Crew… 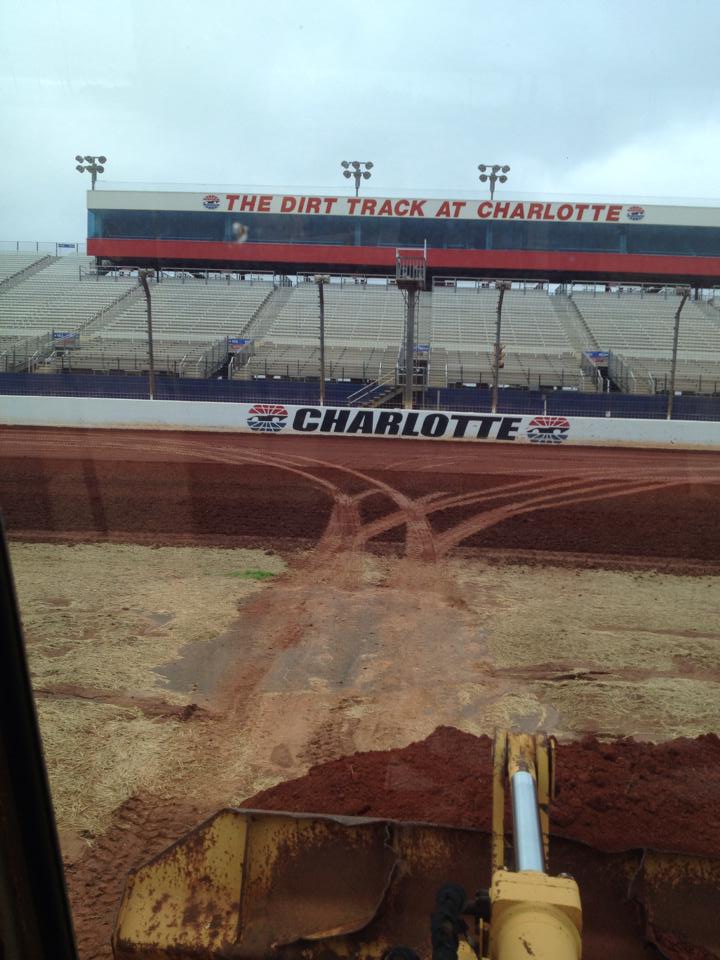 The Dirt Tracks of Charlotte and Las Vegas specifically bring their own challenges to dirt track prep.

In regards to the World of Outlaws World Finals, they had to start over. The Dirt Track World Championships took a lot of the clay out of the surface. They were missing a foot deep of clay. So, the World Racing Group and Gary Risch brought in 30,000 yards of clay back into the track.

“It starts with a lot of moisture tilling. Getting your base packed hard. And Working backwards from that.”

He also discussed another unique and rather interesting topic regarding dirt track prep. Converting an asphalt surface to dirt. Such was the case at Oswego Speedway and Rockford Speedway this year.

“Rockford was the time. We had a day and a half to do it with not much equipment. Rockford was an animal in itself.” Gary says they learned some things as a company to make both Rockford and Super Dirt Week better in the future.

Different Types of Dirt Across the Country… 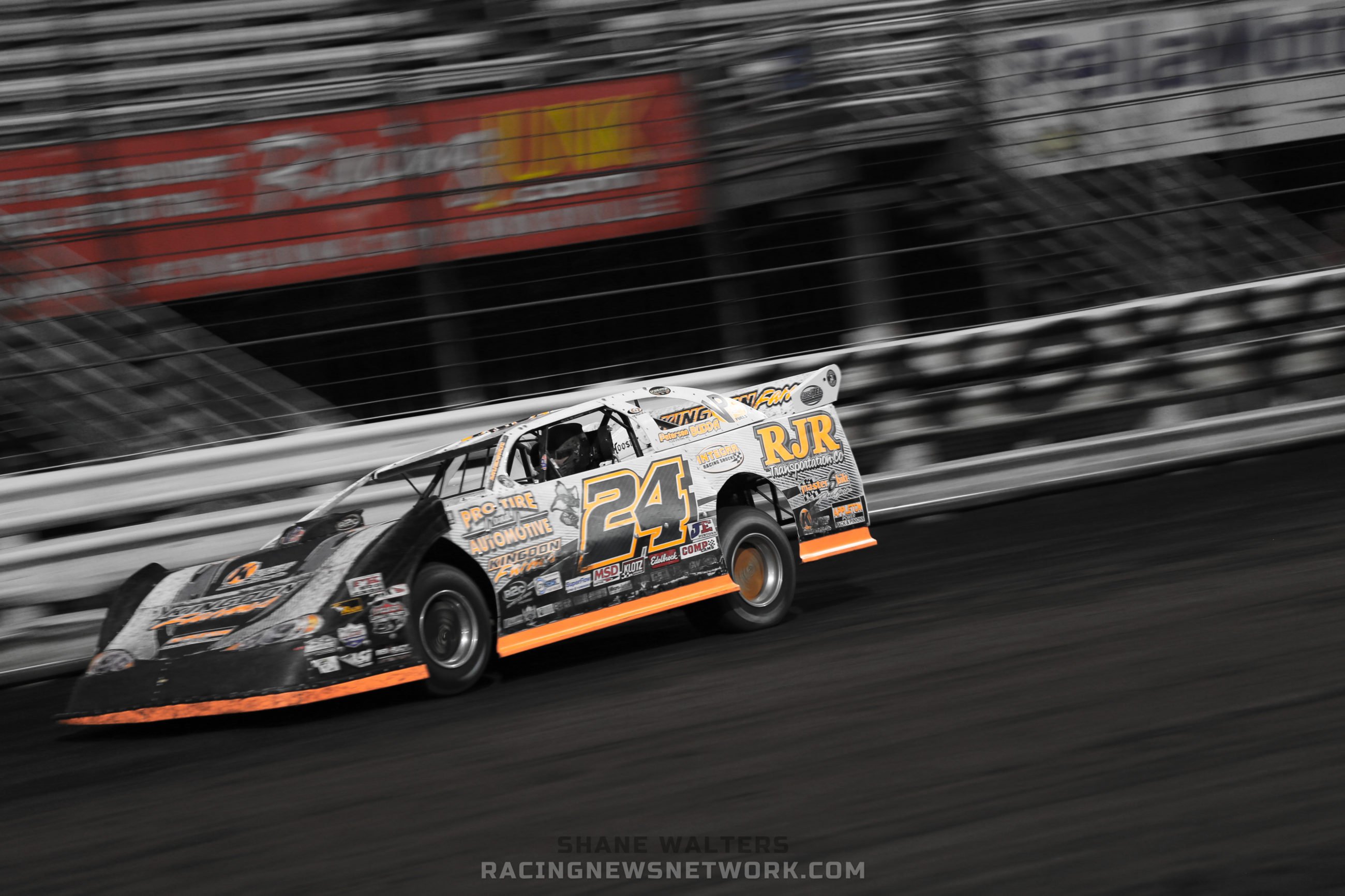 Gary Risch talks dirt across the country, “This is pretty good right here. If they don’t mess with it and mix all the stuff in it. The soils pretty good here. Lernerville where I’m based out of, it’s pretty good dirt.”

“Volusia’s a totally different type of dirt but it’s really really good. It’s like the black gumbo.” Vegas is is a bit of a different story, “Then you get out to Vegas, which it’s not. It’s chips and bi-product. Whatever junk they get out of the bottom of the wash.”

“Eldora, they work all the time with trying to put the right stuff on. You go to Knoxville, I mean holy shit. I mean people would dream to have the material that Knoxville has and the amount of material Knoxville has. There’s not a lot of places in the country that are able to do that.”

“Most of the racetracks that are successful, have good promoters in there that care about that surface. Like Port Royal and Williams Grove. You never see a problem with it. They know what they need and they know the good dirt.”

“The places that have bad dirt. They can’t get the right stuff because of financial reasons or whatever. They’re always beaten their head off the wall. You kinds feel bad for them at some point.”

“I’ve gone into certain places and I won’t name names. Race tracks that are just dirty. The clay is just not good. They can try and put all the magic potions in it they want. But until you take it off and find the right stuff you’re always going to fight that fight. We all know there’s some race track out there that get really really dirt and ugly.”

Those situations aren’t good. “It’s not good for the fans.” The tracks aren’t always to blame though. Sometimes tracks are just dealt a bad location. It’s not always a lack of funds. Sometimes the dirt in the area just isn’t great for racing.