DAYTONA BEACH, Fla. – From South Carolina to Connecticut, the 2017 schedule announced today for the unified NASCAR Whelen Modified Tour will test the best Modified drivers over 17 races and two special events at some of East Coast’s most historic venues.

The new era will kick off on Saturday, March 18, with the season opener at Myrtle Beach Speedway. South Carolina’s semi-banked half-mile oval held its first NASCAR event in 1958. The champion will be crowned at Connecticut’s Thompson Speedway Motorsports Park, as the .625-mile hosts the 55th Sunoco World Series of Speedway Racing on Sunday, Oct. 15. 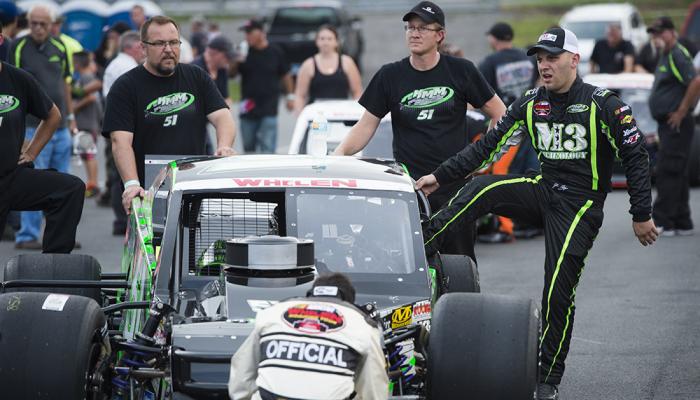 “NASCAR is committed to growing and enhancing the profile of the NASCAR Whelen Modified Tour,” said George Silbermann, NASCAR vice president of weekly & touring series. “The 2017 calendar is a mix of some of the best race tracks for the exciting brand of racing that Modified fans have loved for more than 60 years. We are looking forward to a championship season worthy of the likes of Richie Evans, Jerry Cook and others.”

“Whelen Engineering is extremely excited about the direction NASCAR is taking with the NASCAR Whelen Modified Tour, and our commitment to the tour is unwavering,” said Phil Kurze, vice president of motorsports for Whelen Engineering. “We truly feel the racing is some of the best in NASCAR, and the tracks that the tour will visit will provide fans a great experience as the drivers fight for the 2017 NASCAR Whelen Modified Tour championship.”

After Myrtle Beach, the NASCAR Whelen Modified Tour will return to New England for two of the staple weekends of the early racing season: The 43rd Annual Icebreaker at Thompson and the 46th Annual NAPA Auto Parts Spring Sizzler at Connecticut’s Stafford Motor Speedway.

May will include a second race at a southern venue to be announced at a later date.

The tour schedule also features stops at a pair of bullrings known for their high-intensity, close-quarters Modified action: New London-Waterford Speedbowl in Connecticut and twice at Long Island’s Riverhead Raceway.

The tour will also make returns to Seekonk Speedway in Massachusetts and Oswego Speedway in upstate New York after very successful inaugural visits to the two venerable tracks in 2016.

In more great news for Modified competitors and fans, several tracks have signed three-year sanction agreements for their events. They include Thompson’s three races, Brisol, and both championship points races at New Hampshire.

The visibility of the tour and the money available to the competitors is unmatched in asphalt Modified racing. In addition, NASCAR is continuing to look at other ways to help teams reduce costs from a competition standpoint.

“It’s very important to us, as we bring these two tours together, to keep in mind the financial realities of racing on the touring series level,” said Brandon Thompson, Senior Director of NASCAR Touring Series. “Since the end of the 2016 season, we have met with drivers and owners across all series, and will continue to have an open dialogue to work to provide what is best for everybody involved in the NASCAR Whelen Modified Tour.”

The NASCAR Whelen Modified Tour television broadcast schedule on NBCSN will be announced at a later date.

Ryan Newman comments on the changes in NASCAR