These are images of the Stewart Haas Racing Ford race cars for the 2017 Monster Energy NASCAR Cup Series season. The team made the announcement in early 2016 that they would switch to Ford Performance after a long run with Chevrolet.

No Stewart Haas Ford images have been officially released from the team itself. If you go to any social media page of Stewart Haas Racing you’ll see nothing but Chevrolet SS.

That’s likely just a contractual thing through the remaining days of 2016. However, a look inside the shop tells a very different story. 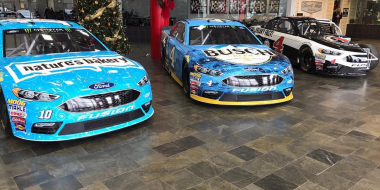 The 2017 Stewart Haas Ford cars are ready for the track. Kevin Harvick, Kurt Busch, Danica Patrick and Clint Bowyer all have Ford machines sitting in the showroom.

The racecar images surfaced from Tim Duerr who is the marketing manager at Ford Performance. He took the photos on his trip to the Stewart Haas Racing facility in Kannapolis, NC.

Another Ford image came from a different instgram account. AmberWavesPurpleMountain was on sight at the filming of the Doonies 3 video by Monster Energy. The filming location was at the Glamis Sand Dunes.

On the Doonies set was the 2017 Monster Energy Ford powered NASCAR machine from Stewart-Haas Racing . It was driven by Kurt Busch. His car was not used in the short promo video for the short film.

The Monster Energy Doonies videos bring a collection of the most outrageous Monster Energy machinery into 1 video. The Doonies journeyed back to the Glamis Sand Dunes in California to wreak havoc. The video will be released shortly, most likely on January 1st, 2017.

The Stewart Haas Racing Ford’s will also likely be shown officially on January 1st. I expect the team’s social promotion to switch from Chevy to Ford in just a few days.

Stewart-Haas Racing has entered Chevrolet cars in the NASCAR division since it’s inception. The first NACSAR race for Stewart Haas was in 2002 at Kansas Speedway. The switch to Ford in 2017, marks the first manufacture change for the NASCAR Team.