NASCAR Stages are a bandage for a broken leg

Yesterday, Brian France announced the biggest change to NASCAR, in the history of NASCAR.

NASCAR stage racing will break each race into 3 segments. The leader at the end of the first two stages will be awarded bonus points. Overall, this will likely make the racing better. It will make drivers race harder. Most importantly, drivers will be forced to race harder throughout the entire event. But it’s not the solution, it’s a bandage slapped over the real problem.

How did we get here? NASCAR has the word ‘boring’ attached to it. When you find yourself in the awkward conversation with a non-fan, generally they will use the word ‘boring’ as you try to dispute your love for racing. However, in recent years, it’s not just non-fans saying this. That opinion has spread like wild-fire.

NASCAR was great. What changed? It’s not the format. It’s the newer tracks.

Fifteen 1.5 to 2 mile race racetracks (excluding; Darlington, Daytona, Talladega) are on the 2017 NASCAR schedule. There’s 40 races per year, counting Daytona Duals, the All-Star race and every NASCAR Cup Series weekend. 37% of the tracks are exactly the same. That’s a trash product if I’ve ever seen one! 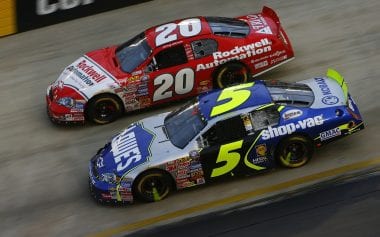 I love Bristol, to death and even they have there own set of new-age problems. I’m very aware that if 37% of the schedule was at a track EXACTLY like Bristol, that’s not good. Not everyone loves Bristol. So, while that would be awesome for me. It wouldn’t be awesome for the people who love 1.5 mile tracks, Superspeedway racing or even the short track fans who likes variety. They would hate it and we’d be having this same conversation in reverse.

Who’s idea was it to build fifteen racetracks that are exactly the same? It’s not the size that matters, it’s the shape, the banking, pit roads. It’s the same thing every week. That cookie-cutter term didn’t drop down from nowhere, it literally looks like you placed a cookie cutter on top of each of these racetracks. Nobody is going to travel with any racing series if they see the same racetracks week in and week out.

Many people love these tracks. But there isn’t enough of those people to continue growth of the sport. So, as NASCAR began cookie-cutter paving it’s future, NASCAR began to die. What’s left are the 1.5 mile lovers. Your short track racing fans left a long time ago. That’s what killed the growth of stock car racing in America. NASCAR stage racing won’t bring them back.

NASCAR stage races will probably make the current product better. But, when I think about these segments I start thinking about what they’d be like at the short tracks. We don’t need segments are Bristol, Martinsville or Richmond. Those races always have side-by-side racing somewhere in the field. The field doesn’t need to be ‘bunched up’, it’s always 40 jet planes in a gymnasium.

I actually thought NASCAR came to this realization years ago. They purchased Iowa Speedway and created a NASCAR dirt race. Those are big steps in the right direction. But that was done years ago. Year later, the Monster Energy NACAR Cup Series still visits neither of those tracks. Instead, we are now re-paving Taxas and Atlanta to keep those around for another 20 years.

The segments are aimed to fix a problem with the cookie-cutter race tracks. NASCAR stages WILL make the racing better at 37% of the tracks on the NASCAR schedule. But why not just fix the schedule? Lets break the problem into simple math. 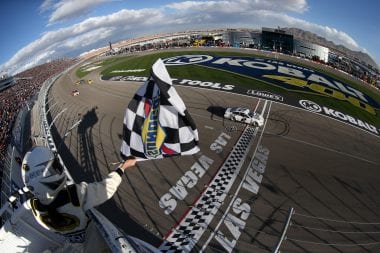 The math is overly simplified on purpose. Cars also take up more than 640 feet, as they don’t all run exactly bumper to bumper. But that IS the problem with NASCAR.

Short tracks are more exciting for a longer duration of green flag racing, just facts. When cars spread out at a short track, they get lapped. Lapped cars aren’t dead weight for the racing product. Lapped cars force the leader to take new lines. It adds an element of surprise and creates ‘racing’.

Meanwhile, on the 1.5 mile tracks… A spread field causes a bore fest. It’s a problem that used to be fixed with an invisible debris caution. The rise in phantom debris cautions were just another and very similar shaped bandage for the real problem, boring-as-shit race tracks.

I don’t know why we have 37% 1.5 mile tracks. It’s almost like NASCAR was purposely trying to separate itself from short track racing. So, the fans pushed back and separated themselves from NASCAR. The fans are still here, they just aren’t at your 1.5 mile rodeo. Instead, they are hiding under the dust, at your local short track.

PREV POST
Brian France Wants Everyone to be a NASCAR Fan

Martha Earnhardt has passed away

NASCAR attendance up in 2021 season