A new points format has also been announced. 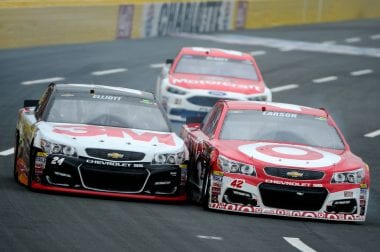 The new NASCAR race format includes NASCAR stage races. These are races within the race, and the stages will pay points. Each stage will have a winner who’s rewarded via bonus points. Then, they will have an overall race winner as well, of course.

This new NASCAR stage race format will be applied to all 3 divisions of the NASCAR ladder. This includes; Monster Energy NASCAR Cup Series, NASCAR Xfinity Series and the NASCAR Camping World Truck Series.

Brian France talks about the 2017 NASCAR segment race format, “We’re going to do what our fans have been asking us to do. That’s to make the racing compelling on an hour by hour basis.”

NASCAR stages will give TV networks known break times. Football has a halftime, the NHL has 3 periods of play and now NASCAR has 3 segments. It will allow the fans to see more racing. The bulk of commercial brakes will take place during pit stops or during segment breaks. Fans will see more on-track action with the same amount of commercials. 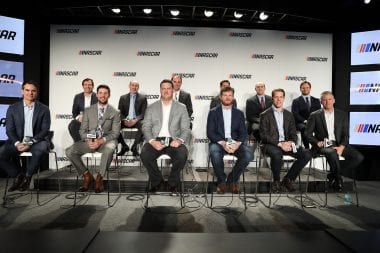 The new NASCAR Segment races are described as a ‘community collaboration’. This new NASCAR stage races format was created by the drivers, teams, tracks, sponsors as well as NASCAR executives.

Dale Earnhardt Jr talks about the NASCAR stage racing, “This is an exciting time for NASCAR.”

He continued, “I love the fact that the bonus points or the playoff points will carry through the playoffs all the way to the last round.  So everything you do throughout the season is really going to help you throughout the playoffs.  That’s a great change.”

The #88 drivers talks new NASCAR stages, “Also, the stages are going to bring a lot of excitement for the drivers and the fans.  I was in a unique position this past season to be a driver and a fan, and definitely I think this creates a lot of interest in a part of the event, in every event, every single week where it was needed.  There will be a lot on the line.  It’s going to be very interesting to watch these crew chiefs try to figure out the strategies that will help their drivers obtain the most points for each stage, and it’s going to be fun to see how this evolves.  I think it’s an exciting time for NASCAR, and the fans should be pretty excited about this.”

Jeff Gordon elaborated, “I’ve got to say, just being a part of this, in that room, collaborating and hearing the different views and having everybody’s input from team principals, track operators and owners, the drivers, NASCAR, networks, it was a pretty amazing experience, and I think what came out of it was this balance between what the fans are asking for and what we can do to make the races even more exciting and make more moments.”

Jeff Burton talks the fan perspective of NASCAR Segments, “Yeah, and from my point, when we’re not broadcasting a race, I’m watching the races.  I’m a race fan.  I love watching racing and I go to races.  I watch races live, I watch them on television.  And when a race fan buys a ticket to go to a race, that race fan deserves to see a race that matters.”

Denny Hamlin explains exciting moments that will arise, “You’re going to have guys that are wanting to stay up front to collect those stage points, and you’re going to have everyone else pit.  So the field is going to get completely swapped around, and what happens when you swap a field around?  You have more side-by-side racing and more exciting racing.”

Denny Hamlin confronts that statement that this might be confusing for fans, “I think that there’s a lot of different things within this that you don’t necessarily need to know how a watch works, you just need to know what time it is. I think you’re going to see better racing on the racetrack, and that’s all that matters.” 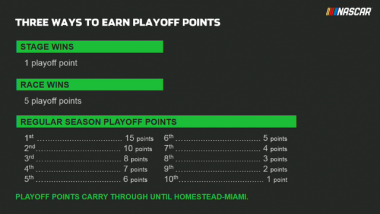 If you’re an old school fan that dislikes ‘the chase’ you can have a little party. The Chase phrase is no longer in use. It’s now the NASCAR Playoff’s. Dale Earnhardt Jr says some fans should be very excited, “For all the fans that have been looking for us to get rid of ‘The Chase’, this is a great day for you.”

Brad Keselowski explains that this new NASCAR Segment Racing encourages risk taking, “You ever seen cats herded before? That’s trying to get race car drivers to agree to things and to get together. I think every race car driver would agree that the more opportunity you have for rewards, the more you’re going to put out risk, and risk makes for some of the best racing. When there’s risk on the line and you see guys that are going to take a chance that maybe they didn’t have the incentive to take before earlier in the race, it’s not really racing harder, it’s taking more risk. And I think that’s really what you see out there”

The Daytona duals will pay out season points.

“Simply put, this will make our great racing even better,” said Brian France, NASCAR chairman and CEO. “I’m proud of the unprecedented collaboration from our industry stakeholders, each of whom had a common goal – strengthening the sport for our fans. This is an enhancement fully rooted in teamwork, and the result will be an even better product every single week.”

“These are enhancements that the NASCAR fan has long sought, and the entire industry has worked hard to develop a better racing format for our fans,” said Steve O’Donnell, NASCAR executive vice president and chief racing development officer. “This format puts a premium on every victory and every in-race position over the course of the season. Each point can eventually result in winning or losing a championship.”