FORT WORTH, Texas (January 6, 2017) – Texas Motor Speedway will begin a major capital improvement project Monday consisting of a complete repave, construction of an extensive drainage system and a re-profiling of the 1.5-mile oval configuration at the world-renowned motorsports facility that annually plays host to NASCAR and INDYCAR events.

The renovation will add a new layer of asphalt over the existing pavement, an expansive French drainage system on the frontstretch and backstretch, and reduce the banking in Turns 1 and 2 by four degrees. Barring extensive weather delays, the project is expected to be completed by early to mid-March in anticipation of the O’Reilly Auto Parts 500 NASCAR doubleheader scheduled for April 7-9.

The repaving and drainage system come as a result of issues the facility was incurring in attempting to dry the racing surface, in particular this past year when both NASCAR race weekends and the INDYCAR race were affected by weather-related delays. While the aged track surface at Texas Motor Speedway is lauded by drivers, speedway officials made the decision to repave in the best interests of their fans that had to deal with the inconveniences of the delays. 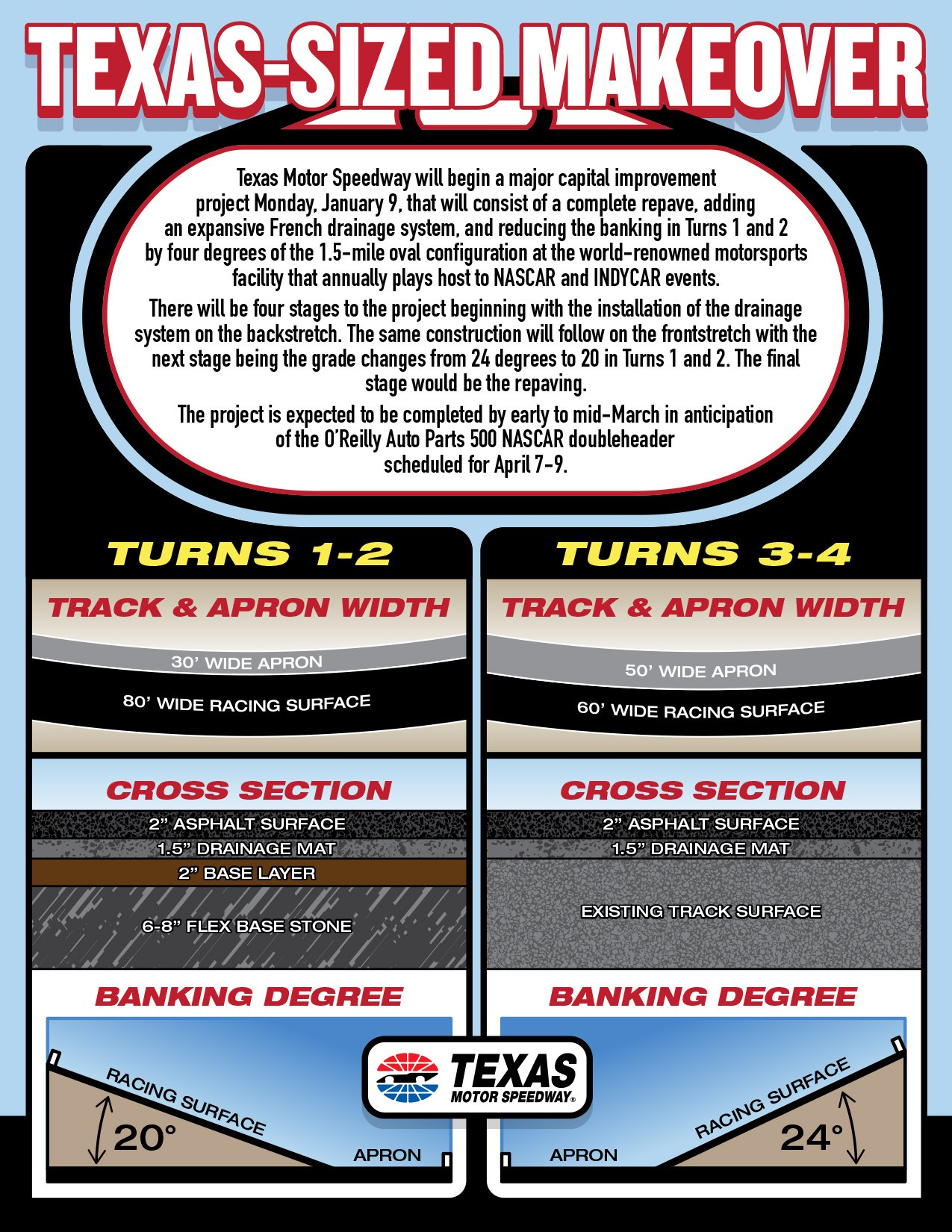 “The fans are why we are doing this,” Texas Motor Speedway President Eddie Gossage said. “The old pavement no longer dried as quickly because through the years of use and weather, the asphalt became porous, kind of like a sponge. Even if we only had a brief shower it was taking us far too long to get the track dried in order to get on to the racing. We owe it to the fans to present the best possible race track so they will be assured of seeing NASCAR and INDYCAR races even if we face some brief inclement weather. This will accomplish that goal.”

Lane Construction Corp., with offices in neighboring Justin, Texas, will handle the repaving project and is known as the preeminent paving company for NASCAR speedways. The company has paved several prominent speedways since 2003 including such marquee facilities as Charlotte Motor Speedway, Daytona International Speedway, Darlington Raceway and Talladega Superspeedway.

The repave will feature an asphalt mix similar to the surfaces at SMI sister tracks, Kentucky Speedway and Las Vegas Motor Speedway. The mix used in conjunction with the construction method will aid in the track’s properties of an “aged” track.

For the installation of the French drainage system, trenches will be cut in numerous locations on the frontstretch and backstretch to provide multiple points for water to drain away from the facility more quickly and efficiently than the current system. The drainable mat installation that will tie into a continuous toe drain will aid in the drainage of the track as well.

In addition to the repaving and drainage system, Texas Motor Speedway will undergo a re-profiling in Turns 1 and 2 to give the venue a more unique layout from its currently symmetrical 24-degree banking in all four turns. While Turns 3 and 4 will remain unchanged, the banking of Turns 1 and 2 will be decreased to 20 degrees with the racing surface width expanding from 60 to 80 feet in that section of the track.

“Due to the issues we had in 2016 with moisture and track drying, we had to take steps to correct the problems to give the fans the experience they deserve,” said Speedway Motorsports, Inc. Vice President of Operations and Development Steve Swift, who is coordinating the project. “With that task at hand, we looked at what would be the best way to create more exciting racing and to correct the water issues. We are excited to put these practices in place and create another great SMI race.”

The reduced banking, which will decrease lap speeds and potentially open up additional passing opportunities in Turns 1 and 2, will provide Texas Motor Speedway with a new, distinctive layout for a 1.5-mile oval that will be more challenging to the drivers and add more action for the fans. 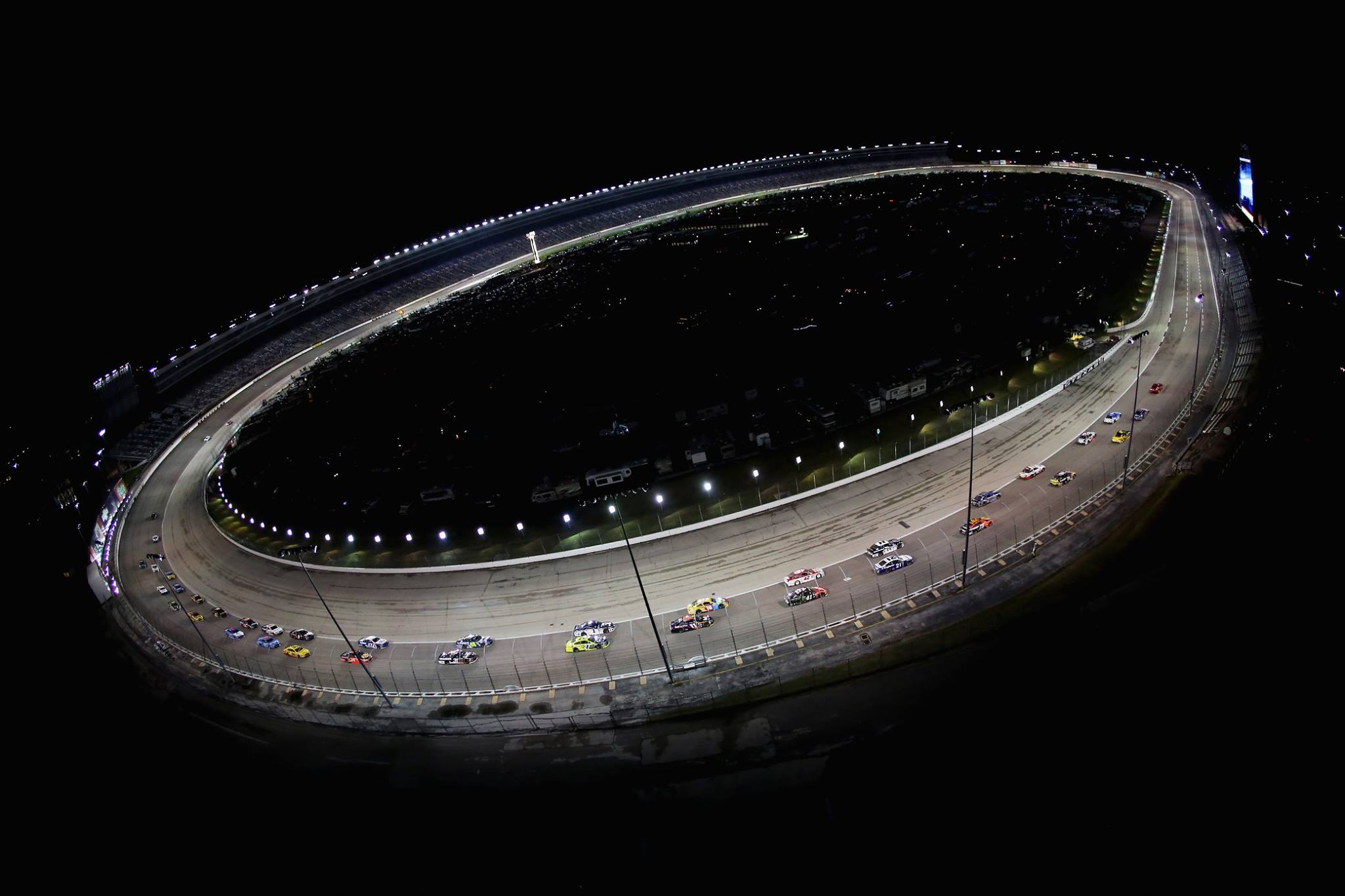 “For years, I’ve heard the absurd comments about 1.5-mile tracks being tagged as ‘cookie-cutter’ tracks,” Gossage said. “While nothing could be further from the truth – all 1.5-mile tracks are different – this assures once and for all that Texas Motor Speedway is unique, unlike any other track in the sport. That’s the way we like it here in No Limits, Texas.”

There will be four stages to the project beginning with the installation of the drainage system on the backstretch. The same construction will follow on the frontstretch, with the third stage being the grade changes in Turns 1 and 2. The final stage would be the repaving.

This will be the second full repave since Texas Motor Speedway opened in 1997. That project occurred in the summer of 2001 as the speedway had the racing surface repaved with a granite-based asphalt compound from the original limestone-based asphalt.

For more information, please visit www.texasmotorspeedway.com or call the speedway ticket office at 817.215.8500. The speedway is also on facebook.

NEXT POST
Brian France Wants Everyone to be a NASCAR Fan