DAYTONA BEACH, Fla. – Scott Steckly is now the 2015 NASCAR Canada Series champion. When you’re victorious in one out of every five races, and capture the championship nearly every other year, the winning can become routine. Perhaps even monotonous.

The title is his fourth in nine seasons of series competition – was anything but routine, however.

“The first two championships we went into the last two races of the season with a decent lead, so we were defending the points,” Steckly said. “The third one we were coming from behind so we knew exactly what we had to do and that was win the race.

“This fourth one I felt was the hardest because the lead was so small we had to race hard to beat the other contenders, but we also had to race smart because we couldn’t afford to get in a wreck or do something stupid that would cost us a bunch of points.”

Steckly employed the same characteristics to gain this championship as in year’s past, however. Front-running consistency fueled by seasoned expertise.

“Our team is very solid,” Steckly said. “It’s a great group of guys. Everybody has their job and knows what to do. We’ve been together so long everybody knows how to work together.” 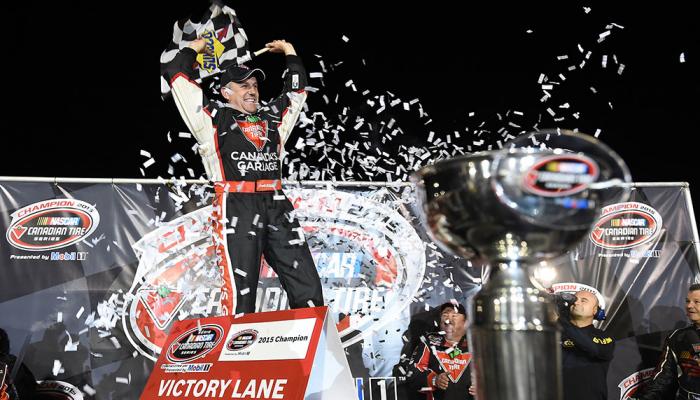 Despite setbacks in the season’s first two events, Steckly’s No. 22 Canadian Tire Dodge team methodically worked its way back into the championship picture. The key stretch to the championship campaign was a sweep of the poles and checkered flags in the annual Western Swing to Edmonton International Raceway in Alberta and Auto Clearing Motor Speedway in Saskatchewan.

“The first race of the year at Canadian Tire Motorsport Park we very easily could have won, the first oval race at Autodrome Chaudiere we also could have won as we led and had a mechanical failure,” Steckly said. “Right from the start of the season the performance was there, we just didn’t have the results. Once we went out west the results came, and we capitalized on it from there.”

The back-to-back western wins gave Steckly the points lead for the first time. It would not be relinquished.

That’s not to say he wasn’t challenged. Jason Hathaway won the penultimate race of the year at CTMP to cut Steckly’s lead to nine heading into the finale at Kawartha Speedway, where he turned in a dominant winning performance as well.

That’s where the battle-tested experience comes into play. Steckly and crew remained focused and fast. The team finished second to Hathaway in the race, but edged him for the championship by four points.

“The way the team performed at Kawartha was great,” Steckly said. “We’ve always done well there and we knew that unless something happened that we could run up front.

“The next to last race at CTMP was the tough one. We would like to have finished better in that race, but we also had to protect the points lead, so that was probably the most stressful race.”

When the dust settled at Kawartha, the flagship car for the 22 Racing organization had produced three wins and 10 top 10s in 11 outings to extend Steckly’s series record for championships to four.

He became just the second active driver among the current regional touring series to register four crowns along with George Brunnhoelzl III in the NASCAR Whelen Southern Modified Tour, and the 33rd in the history of NASCAR to accomplish the feat.

“It’s a pretty good feeling to be one of the few guys that has four championships, and it’s a great honor to be mentioned along with them,” Steckly said. “I’m very privileged, proud and thankful of everyone that supports me and allows it to all happen.”

Climbing behind the wheel isn’t Steckly’s only obligation though, which makes his accomplishments that much more admirable. He’s also the owner and operator of 22 Racing, which fielded a full-time entry for Alex Tagliani as well as a third car part-time.

In addition to his work in the shop leading up to an event, Steckly often assists his other teams at the race track.

“It’s definitely stressful at the race track when you have two other teams there,” Steckly said. “It could take a bit away from our No. 22 team, but it can also help our team. There’s a balance there where you have to use the knowledge that you get from having two cars.

“That’s part of having a good crew. I can basically just focus in driving and not worry too much about the other stuff.”

Steckly was also quick to credit Tagliani for what he and his crew have contributed to the organization.

“I’m grateful for what Alex and Tagliani Autosport have brought to 22 Racing the last two years. They’ve been great teammates.”

Despite the workload, the 43-year-old Steckly is perhaps hitting his career peak. One of three ironmen that has competed in each of the 109 all-time Canadian Tire Series events, Steckly now is tied for second on the wins list at 19 and tied for first with 17 poles thanks to his 2015 performance.

And when it comes to series crowns, he’s without peer.