Watch the first laps of the 2017 Mercedes F1 car. In the video below the W09 EQ Power+ racecar hits the track for the first time

The 2017 Mercedes F1 car is on track, watch below. Mercedes-AMG Petronas Motorsport today took the first step on the road to the 2017 Formula One season with the official presentation of the new F1 W08 EQ Power+.

The 2017 Mercedes F1 car was launched to the team’s fans from the Silverstone garages via a live 360-degree broadcast on Facebook, YouTube and the Team’s official website – reinforcing the “fan first” approach that has grown Mercedes-AMG Petronas Motorsport’s social media community into the sport’s largest, at over 14 million people.

The 2017 Mercedes F1 car launch was held as part of the Team’s official 100 km Filming Day, during which the F1 W08 EQ Power+ completed its first laps on Silverstone’s 2.96 km International Circuit, in the hands of both Lewis Hamilton and Valtteri Bottas.

The2017 Mercedes F1 car features the all-new W08 EQ Power+ has been designed to maximize the performance opportunities offered by radically different aerodynamic regulations for the 2017 season which will probably see the new cars become the quickest in the history of the sport – while leaving sufficient scope for an in-season development rate expected to be among the fastest ever in Formula One.

The M08 EQ Power+ is the fourth iteration of the Turbo Hybrid generation of Power Units and has been conceived to withstand significantly increased physical loads and a more severe duty cycle under the new rules, while also maximizing potential performance developments. 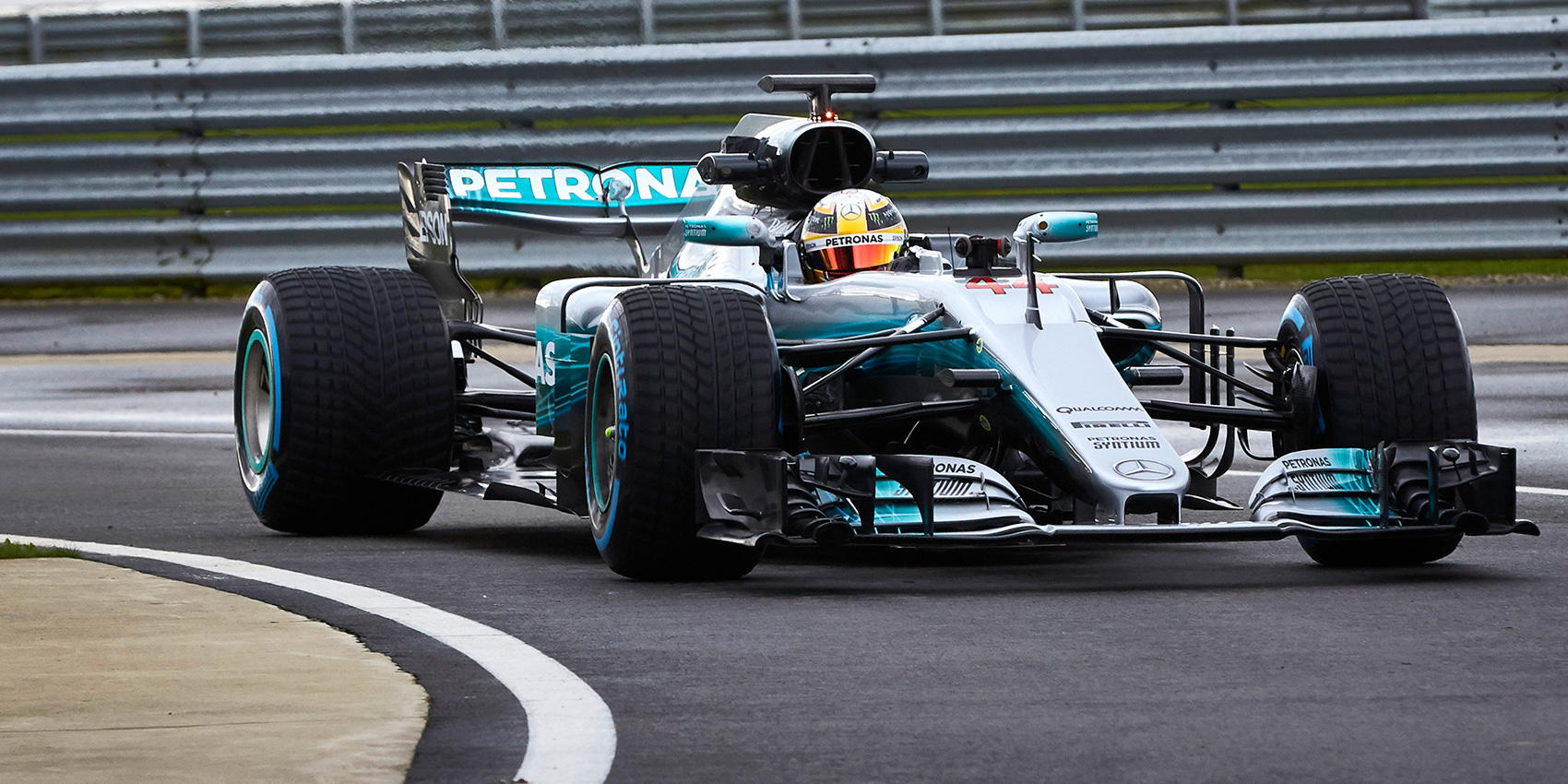 “The new rules for 2017 were designed to make the fastest F1 cars ever through a big increase in aerodynamic performance. They should be more physical to drive and hopefully more spectacular for the fans to watch. The proof will come in the opening races but we have probably achieved that target.

“Of course, in terms of relative performance, it’s clear that any rule change brings with it a big reset but also a big opportunity. This is the time to stay humble and keep our feet on the ground. None of the teams has raced under these rules and we all have the same points right now: zero.

“But the dominant feeling in the team right now is one of excitement – the factory is buzzing with anticipation. It has been a really motivating challenge to develop a brand new car concept and I have never seen our determination to succeed higher than it is right now.

“Of course, we had a curve ball from Nico late last year that left us scrambling a little bit in the winter. But we found a great solution with Valtteri and I am sure that he will form a strong partnership with Lewis. They have both been working hard in the factory with the technical teams and, although we have a different dynamic to manage than in recent seasons, I don’t expect the competition between them to be less intense. And that’s how we like it.

“This year, in-season development will play a big role in determining the championship outcome. None of us know where we will stand at the first race but I am confident that, whatever that position is, we have the people and the capability to deal with every challenge that comes our way. This will be the season where our full works team can show its true strength.” 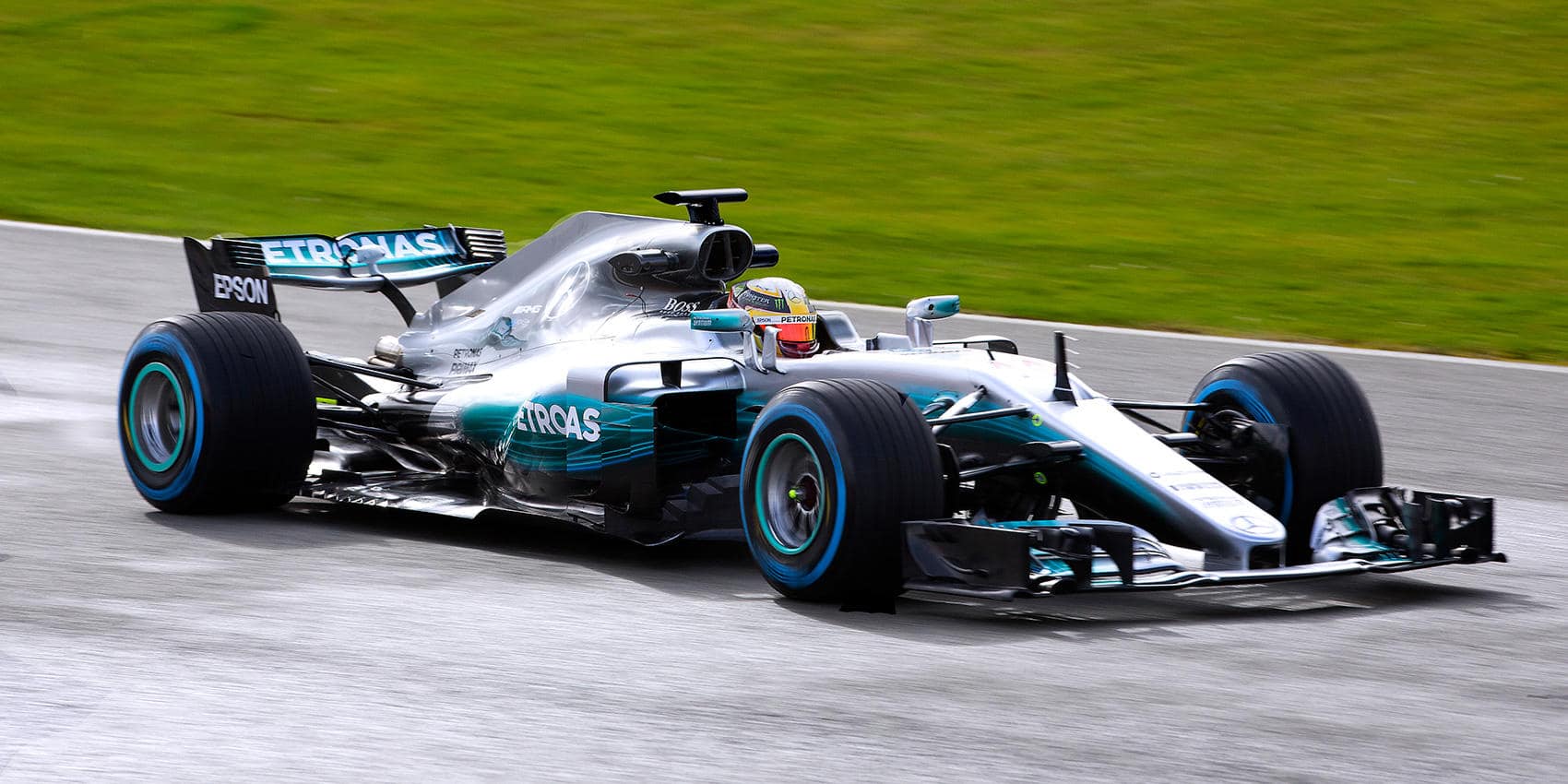 Today’s 2017 Mercedes F1 car launch is not just the premiere of a new car – it also marks the global debut of a new technology label throughout the model range of Mercedes-AMG and Mercedes-Benz.

The new model designation has been translated graphically into the livery of the new W08, with an electric blue visual representation of the airflow across the car running from the front wing to trailing edge of the sidepods. This distinctive signature derives from the electro-look of the Concept EQ unveiled last year. 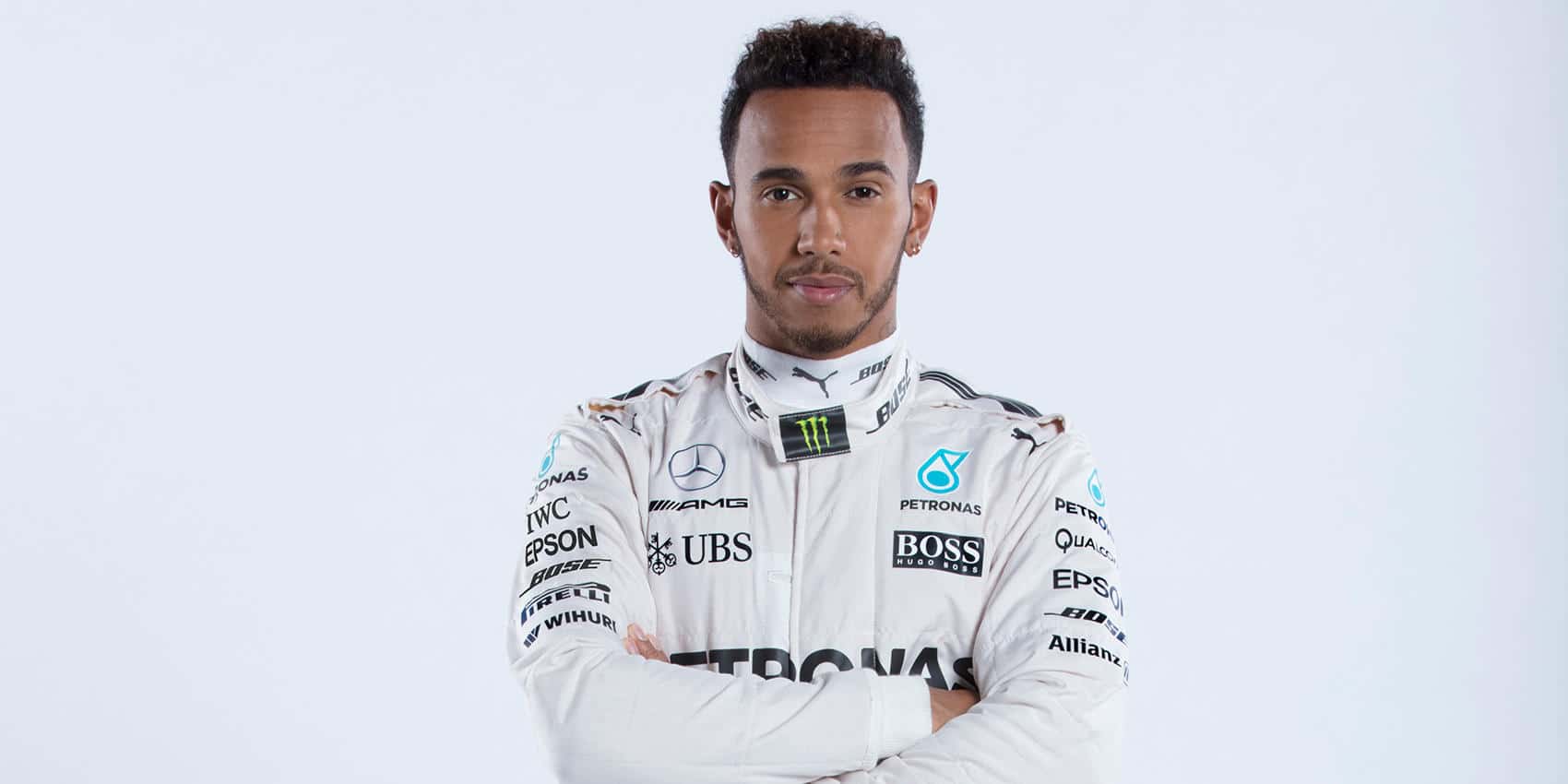 One of the most significant changes for the new season sees Valtteri Bottas become just the fourth Silver Arrows driver of the modern era in 2017. Next to him in the garage will be three-time world champion Lewis Hamilton, who comes to the new season refreshed and reinvigorated.

“It’s been a fantastic winter and an exciting training season for me,” explained Lewis of his preparations for the increased physical demands of 2017.

“I’ve added a new element to my training regime that has kept it really enjoyable and I’m in great shape. Then I’ve visited the factory and that has been super encouraging to see the way in which everybody is working.

“After all the success we have had, people could be sitting back and resting on their achievements. So it’s inspiring to see how everybody is pushing even harder than ever and taking nothing for granted at all.

“This is the most exciting period of the year when the car comes together – and my privilege as a driver is then to get to feel what it’s like and what all the team has worked for.

“There’s not too much point setting goals until we’ve really driven the car, so I’m going to go with the flow until we understand the possibilities.

“I’m feeling in a positive place with the team – we talked about a lot of stuff over the winter, I was able to get some things off my chest and now we are communicating better than ever and continuing to grow together.

“I’m the best equipped I have ever been to work with my team-mate and manage the relationship with my experience and maturity.

“I welcome Valtteri to the team and I know that the team will be giving us both everything they can to win the championship.” 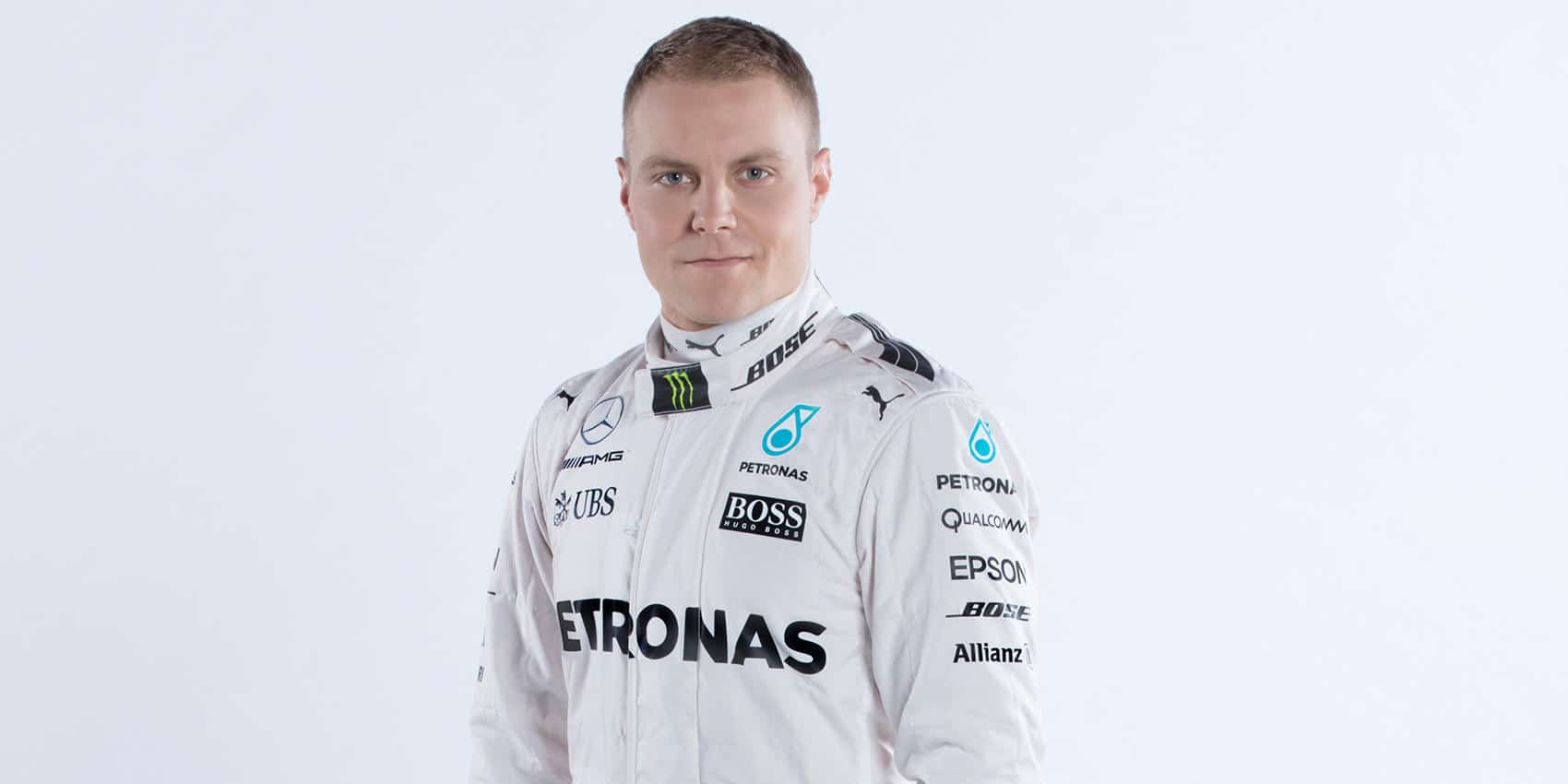 “It’s a new chapter in my career, a new team, new regulations… new everything!

“I’ve been waiting for a long time to get this car out on track and, although this is just a Filming Day, I’m looking forward to starting to test properly next week in Barcelona and to really understand the car that we’ve been given by everybody in Brixworth and Brackley.

“It has been a busy winter for me since signing with Mercedes and we have tried to make the most of the time we have had.

“We’ve been going day by day, making the most of each one, spending a lot of time in Brackley and going through as much stuff as possible with the engineers.

“I feel well prepared in such a short time but, of course, the learning curve is still steep and I’m getting more useful information every day. It’s up to us to make the most out of the time together.

“In terms of my physical preparation, I think I have done the most amount of training of any winter so far. I have done some good training camps and feel in the best shape I’ve ever been, definitely ready for the season ahead.

“Right now, it’s a very exciting feeling for me. I want to say a big thank you to everyone in our factories for getting this car ready to go. It’s been a massive effort and I’ve got a lot of respect for the shape we are in at the moment.

“But it’s only the first step – and this is where the work really begins.” 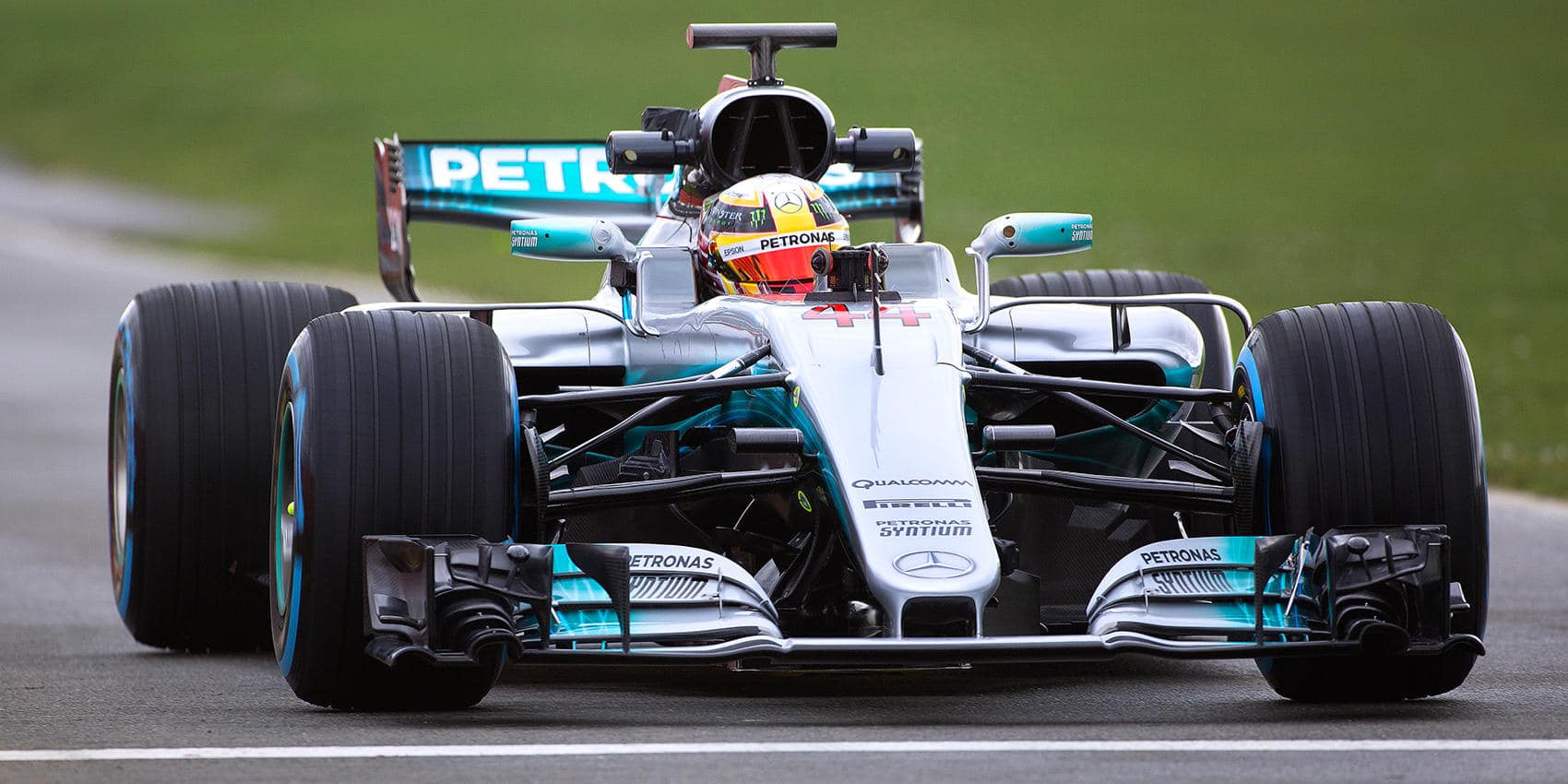 In Formula One, major regulation changes have usually been designed to limit performance and provide the technical teams with new constraints to work within. The new rules for the 2017 Mercedes F1 car opened up a new and exciting challenge – the freedom to explore a more generous set of regulations, coupled with the uncertainty of not knowing exactly where targets should be set, or what will represent a good result.

If last year’s Mercedes W07 was all about refinement and elaborate, detailed evolution, the W08 project has gone back to first principles. With the car having to be designed before running the definitive 2017 tyres, and in some parts before the regulations had even been finalized, it was important to arrive quickly at a sound base architecture, while following a flexible, adaptable philosophy to allow scope for major developments during the season. With this in mind, only 17% of the components in W08 have been carried over from its predecessor, with the team’s main focus lying on optimizing the car within the new aerodynamic regulations.

This is also the first major regulation change to occur under the Aerodynamic Testing Regulations (ATR), which limit every team to the same maximum amount of wind tunnel testing – 65 runs per week. Given the extent of the regulation changes, the first W08 concept ran in the team’s 60% Brackley wind tunnel before the first race of last season and has completed over 2,000 runs during its development so far.

In addition to the new shapes of front and rear wing, the biggest areas of aerodynamic opportunity are the floor and the barge board area in front of the sidepods, which have been the focus of significant work. And while the performance opportunity has been significant, the design teams have also worked to improve the W08 structurally in order to withstand the substantial increases in aerodynamic and mechanical loads.

The 2017 Mercedes F1 car Power Unit, christened M08, has also been comprehensively redesigned for the new season. Although the previous token system did not constrain power unit development since 2014, its abolition allows the technical group more freedom for engineering solutions.

As ever, much focus has been on the primary energy conversion opportunity – the combustion process – but there are also many opportunities for gains further downstream, including within the engine ancillaries. The new aerodynamic regulations have had a significant impact on the configuration of the engine which, as a structural component of the car, must cope with significantly greater physical loads. To maintain its structural properties, the engine is therefore slightly heavier than its predecessor.

In addition to this comes an increased duty cycle, with the cars expected to spend approximately 10% more of every lap at full throttle – a change that is reflected in a 5% increase in race fuel allowance for the new season. M08 has also been designed for increased durability, with only four Power Units per driver per season permitted by regulation in 2017.