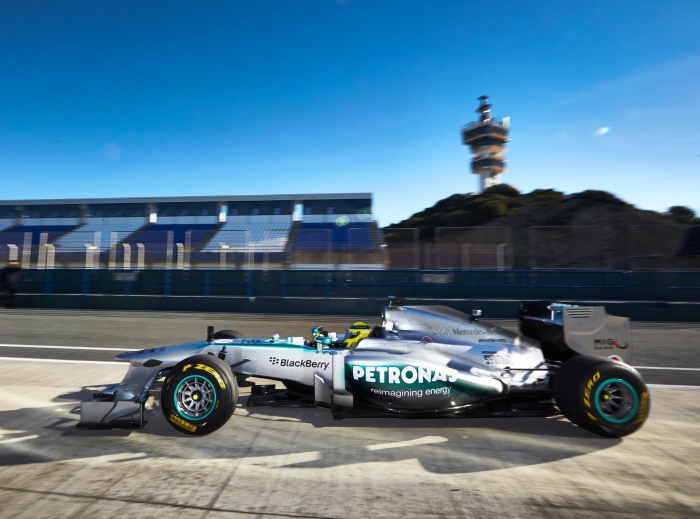 The MERCEDES AMG PETRONAS Formula One Team today unveiled its 2013 Formula One car, the F1 W04, at the Jerez circuit in southern Spain. Nico Rosberg and Lewis Hamilton arrived at the official photo call at the wheel of two Mercedes-Benz SLS AMG Coupé Black Series, the fifth Black Series model from Mercedes-AMG. Inspired by the SLS AMG GT3 race car, the new car offers a blend of breathtaking design, outstanding driving dynamics and lightweight construction in line with the “AMG Lightweight Performance” strategy. Developing 464 kW (631 hp) for a kerb weight of 1550 kg, the SLS AMG Coupé Black Series accelerates to 100 km/h in 3.6 seconds and is the most powerful internal combustion vehicle currently produced by Mercedes-Benz.

The new F1 W04 completed its first laps of today’s 100 km shakedown at 10:21 CET in the hands of Nico Rosberg, who drove the car throughout the morning. Lewis Hamilton will take the wheel of a Formula One Silver Arrow for the first time this afternoon, the first British works driver since Sir Stirling Moss in 1955. The car will then complete four days of testing this week in Jerez, in the hands of Nico and Lewis.

With the technical regulations remaining stable in 2013, ahead of major changes for 2014, the basic vehicle concept of the F1 W04 is a sophisticated evolution of last year’s car. Led by Engineering Director Aldo Costa, under the coordination of Technical Director Bob Bell, the project commenced with initial aerodynamic testing in early summer 2012.

The aerodynamic design philosophy has been optimised around a new five-element front wing design and a second-generation Coanda exhaust at the rear. The car retains pushrod front suspension and a pullrod rear suspension, aimed at optimising tyre life and performance, while the rear end has been aggressively packaged to optimise aerodynamic development potential. The F1 W04 also does away with the stepped nose design of its predecessor thanks to a small ‘vanity panel’, which was found to offer a small gain during aerodynamic testing. The car completed its final mandatory FIA crash test on 15 January.

Ross Brawn: “The F1 W04 is a clear step forward in sophistication”

“2013 marks the start of a second era for our Silver Arrows works team,” said Team Principal Ross Brawn. “The restructuring we undertook at the team over the past 18 months are now growing in maturity and this is reflected in the F1 W04, which is a clear step forward in design and detail sophistication over its predecessor. Many thousands of hours of work have been invested by our technical teams in Brackley and Brixworth to ensure that the new car delivers a step change in performance compared to last season. We are also hugely proud to welcome Lewis to the team as a works Mercedes-Benz driver. With Lewis and Nico, we have what I believe to be the strongest driver line-up in Formula One and I know that a healthy level of competition between them both will help drive the team forward.”

Nico Rosberg: “We want to make this the best team in Formula One”

Nico, who last year took the first victory for a works Silver Arrow in the modern era, completed the car’s first laps this morning in Jerez and will also take the wheel for the first official day of testing tomorrow. “I’ve been working really hard over the winter on my physical preparation, both in the mountains – climbing to over 2,000 metres with ski boots – and also in the Mediterranean, training on my bike, swimming and running. I fitted that around regular visits to see the guys at the factory in December and January and we have done some really good work, especially in the simulator. The car seems to be performing well in the virtual world but we have a very busy and intense programme ahead of us during testing to make sure we can deliver that performance on track. The atmosphere in the team is very positive and the people are highly motivated to succeed. And, of course, I have a new team-mate with Lewis. It’s his first time in the Silver Arrow and I look forward to working together and pushing each other hard, to make this the best team in Formula One.”

Lewis Hamilton: “I have never seen a team hungrier for success than this one”

Lewis has enjoyed the support of Mercedes-Benz for over 15 years, including racing with Mercedes-Benz power throughout his Formula One career, and this year will make his debut as a works Silver Arrow driver. “It’s a very special day for me to officially present our Mercedes-Benz Silver Arrow to the world. There is no company with a longer history in Grand Prix racing than Mercedes-Benz and it is an honour for me to tread in the footsteps of legends like Juan Manuel Fangio, Sir Stirling Moss and Michael Schumacher. It’s the start of a new chapter for me, a new adventure, and when I walked through the doors in Brackley, I was so excited to get down to work. I’ve been at the factory for a few days now, getting to know the guys, meeting my mechanics and engineers, learning myself into the team and I have never seen a group of people that is hungrier for success than this one. They have been flat out this winter trying to pack more performance into the new car and I can’t wait to drive it and see where I can make a difference to help push the team forward with Nico. This is a new start for me with the team in Brackley but I have worked with Mercedes-Benz for a very long time now, and I learned one thing most of all: Mercedes-Benz doesn’t know how to lose. We are playing a long game here but I know we will have success together and I’m excited to be a big part of making it happen.”

Toto Wolff: “The only thing that counts in Formula One is lap time”

Toto Wolff, the new Executive Director of MERCEDES AMG PETRONAS, concluded: “The first laps for a new car are always filled with emotion and today was no exception. It is even more meaningful when the car is a Silver Arrow: Mercedes-Benz has a long tradition of racing success and this is something we are proud to represent and determined to live up to. In the fortnight since I joined the team, I have been impressed by what I have found. The people are highly motivated, open-minded and determined to succeed. Our drivers are hungry for success, too, and it will certainly be fascinating this season to see how Nico and Lewis perform together. Ultimately, though, Formula One is very straightforward and the only thing that counts is lap time.”

The F1 W04 will now complete 12 days of pre-season testing prior to the first race in Melbourne. This week’s testing plan is as follows: Tuesday & Thursday, Nico; Wednesday & Friday, Lewis.