Earl Pearson Jr and Donald McIntosh started their night setting inside and outside pole. The field was then divided into heat races. Each of those drivers came out with a heat win.

Points leader, Josh Richards struggled in qualifying. He selected the low grove for his hot lap while most drivers drifted right to the top. He started toward the tail of the heat. Richards managed a starting position of 14th in the main event. Bloomquist ran 2nd in his heat.

The starting lineup for the 50 lap main event was now set. The front row featured both A and B fast time qualifiers. Green flag. Earl Pearson Jr jumped out to the early lead. He launched off the line, putting a gap to the 2nd row before reaching turn 1. He caught the field sleeping.

Outside pole sitter Donald McIntosh might have been saving his tires at the beginning of the race. The field swarmed him, as he fell outside of the top-five.

Jimmy Owens was now in the runner up position. He picked the bottom lane. Leader, Earl Pearson Jr drove it hard at the bottom of turn 1, sliding through the middle and catching the cushion on exit. Owens didn’t have quiet enough to challenge Pearson.

The field was 3 wide behind them. The LOLMDS drivers were offered multiple groves of racing tonight. The track workers created a great show for the packed house of Georgia dirt racing fans.

Scott Bloomquist was second in points coming into tonights event. He needed to finish ahead of Richard to take the points lead. 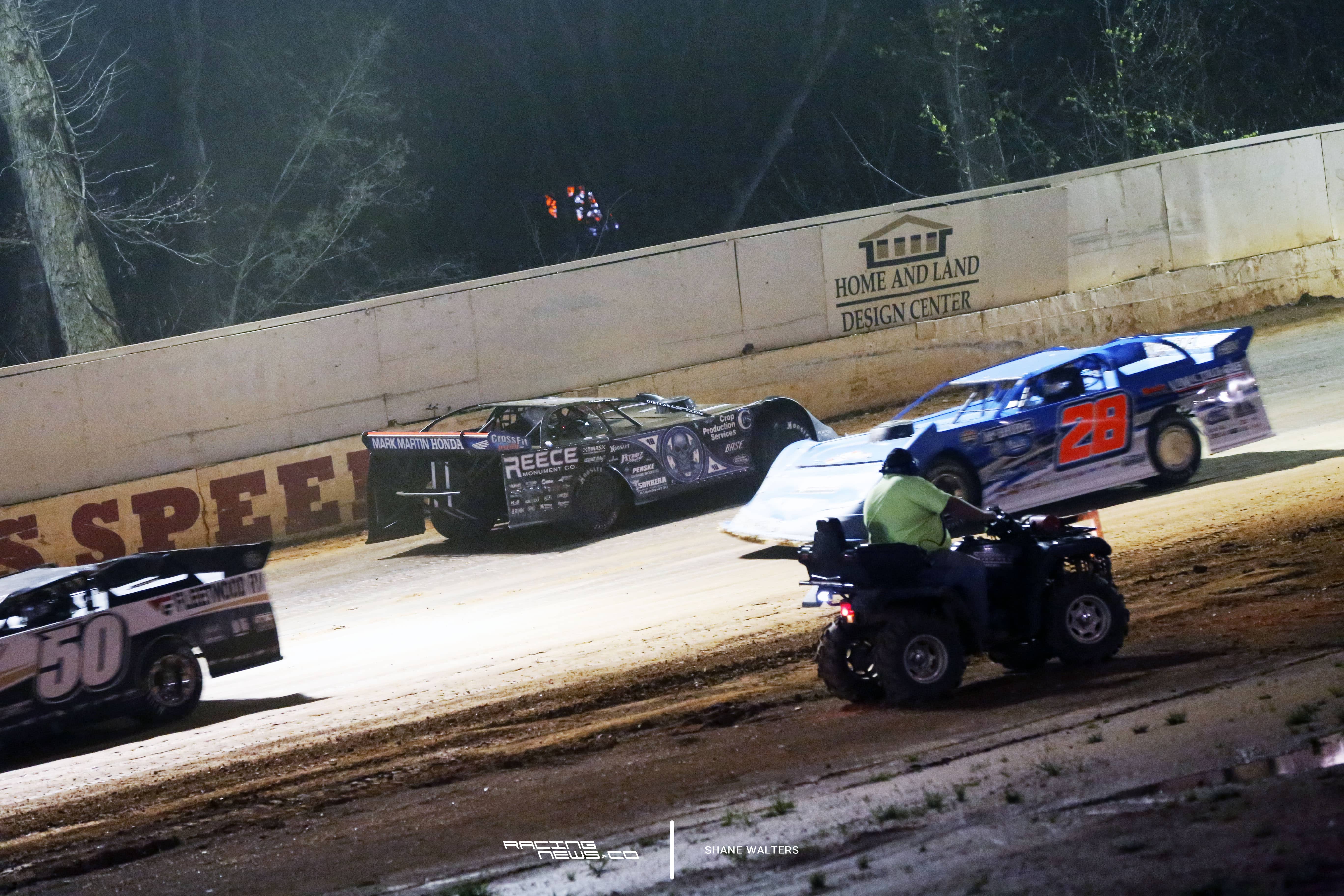 A 6th place starting spot was a good start. However, things took a turn as he found himself parked in the wrong direction on the racetrack. Jonathan Davenport, another LOLMDS championship contender, turned him down the back straight away. Bloomquist resumed, he was sent to the tail.

Meanwhile, Donald McIntosh had begun climbing his way back through the field. He was now racing Don O’Neal toward the front. In turn 4, Don O’Neal turned him. It wasn’t over for McIntosh, the #7 car did a 360 at full speed and continued moving!

Don O’Neal wasn’t so lucky, he created a traffic light at the top of the race track. Problem was, nobody had time to stop. Jonathan Davenport was one of many collected. Don O’Neal left the racetrack on the hook after running inside the top 3, for the second race in a row.

As the race resumed, Donald McIntosh was now running 2nd! However, a familiar face at the front began to surface. Josh Richards was slowly picking off the field, one by one. Searching for the moisture, he stuck to the bottom of the race track. 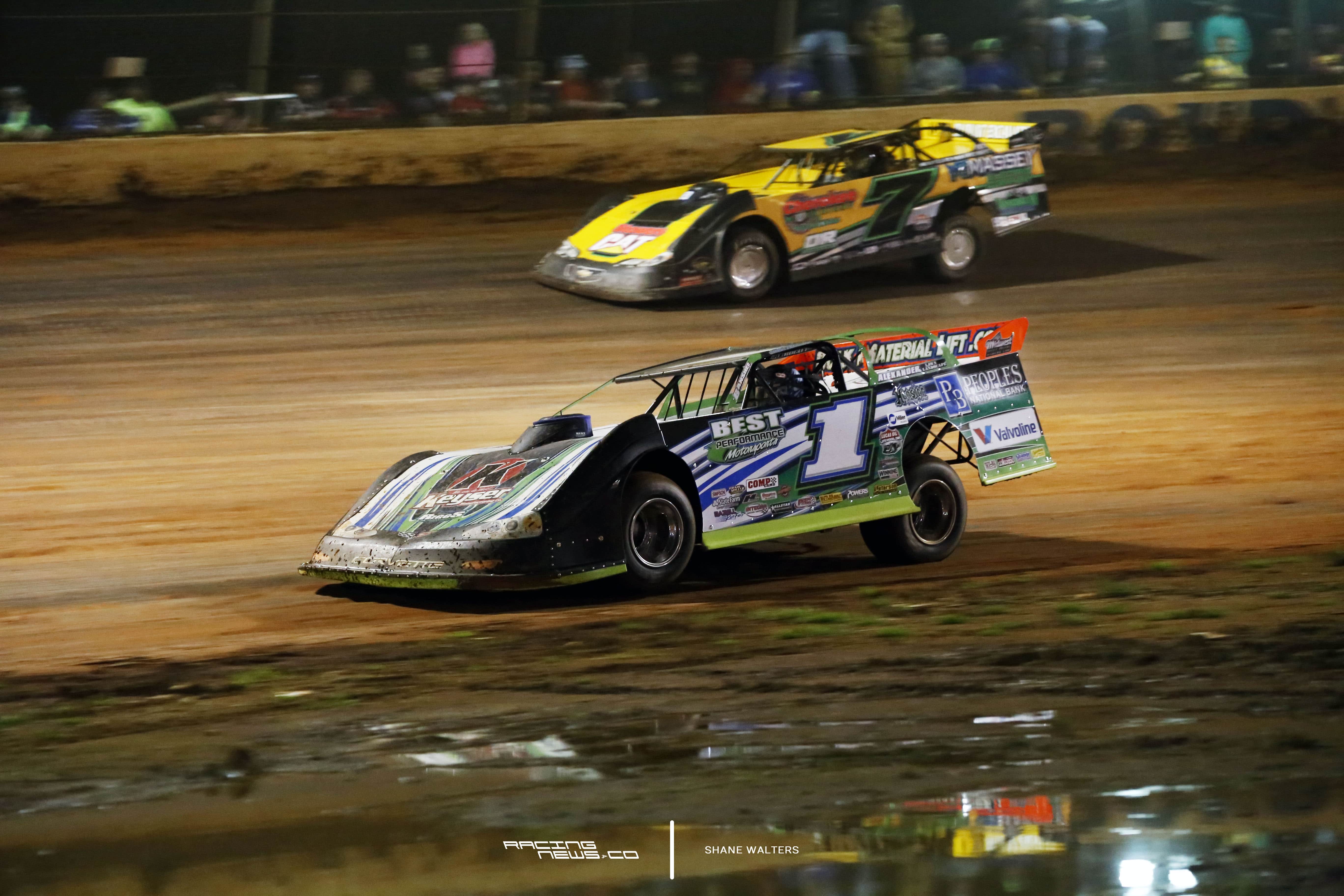 Josh Richards got passed McIntosh. He had now climbed all the way to 2nd. If he had a few more laps he might have had more for the leader. However, it was just 50 laps and it wasn’t enough for Earl Pearson Jr.

Many tired, nobody could touch him. Earl Pearson Jr would go on to win the LOLMDS race at Boyd’s Speedway!

The Lucas Oil Late Model Dirt Series is at it again tomorrow. On April 1st, the series heads to East Alabama Motor Speedway in Phenix, AL. The next day, April 2nd they will re-rack ’em at Duck River Raceway Park in Wheel, TN.

Lucas Oil Late Model Dirt Series – What to Expect in 2017!