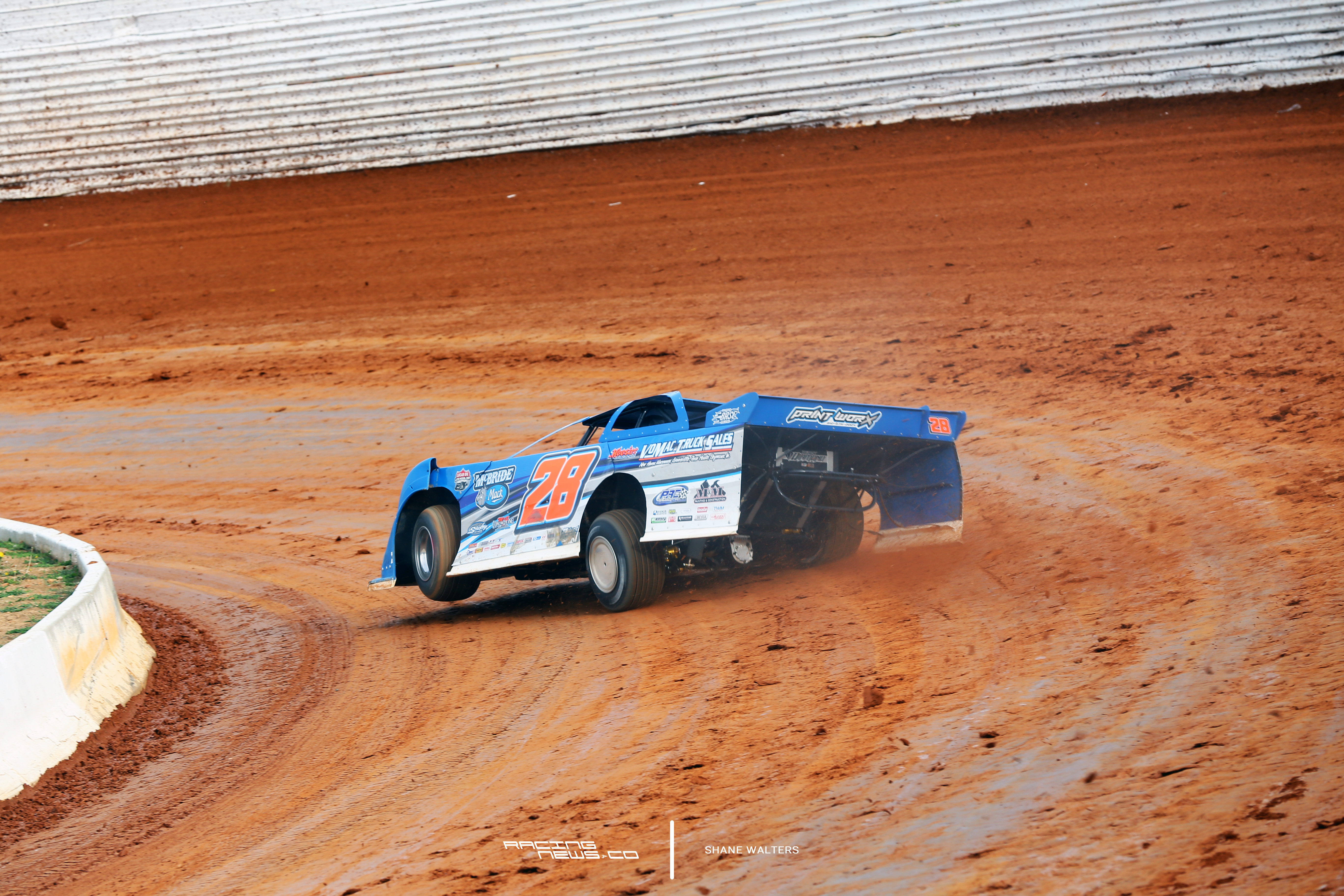 Dennis Erb Jr. set quick time around the 1/2 mile speedway, circling at 18.492 seconds. Times slowed significantly in Group B. Brandon Sheppard was fastest in that group with a 19.953 seconds, a massive 1.5 second difference.

Checking out on the field, Gregg Satterlee won the first heat race. Pole sitter Dennis Erb Jr fell all the way to 6th.

The field was set. Gregg Satterlee and Brandon Sheppard locked the front row. In 50 laps until a winner is presented with the winning check.

Josh Richards started 15th in the main event. Last night’s winner is climbing through the field. By lap 5, he was up to 5th.

Gregg Satterlee can run anywhere. Bottom, top and middle. He puts his black #22 dirt late model to the top for the most part. Tim McCreadie is an early challenger for the lead. McCreadie is looking for the lead on the bottom. He pulls along side but doesn’t clear Satterlee.

Scott Bloomquist has problems for the 2nd night in a row. The LOLMDS point leader pulled off two nights, from 3rd at Sharon Speedway. Tonight, he drives into turn 3 on the bottom. He wiggles, and drifts way up to the wall. Flat tire, he avoids contact with the wall. Bloomquist hits pit lane, he will re-join the field, from last.

Meanwhile, Rick Eckert is coming into the picture. He started rolling past cars on the bottom of the race track. He climbs to 2nd and sets sights on Gregg Satterlee.

Gregg Satterlee might have cooked his tires running hard against the cushion. Perhaps, Eckert just did a better job of saving his for the end. Either way, Eckert is now faster.

The red #7 works even with Satterlee. In a desperate attempt to get the lead back, Satterlee drives it deep into turn 3. He slides all the way to the wall, no traction. Rick Eckert drives right by on the bottom.

New leader. Caution. Rick Eckert will have to defend the field for a short shootout. Green. Rick Eckert begins checking out on the field. No contenders. 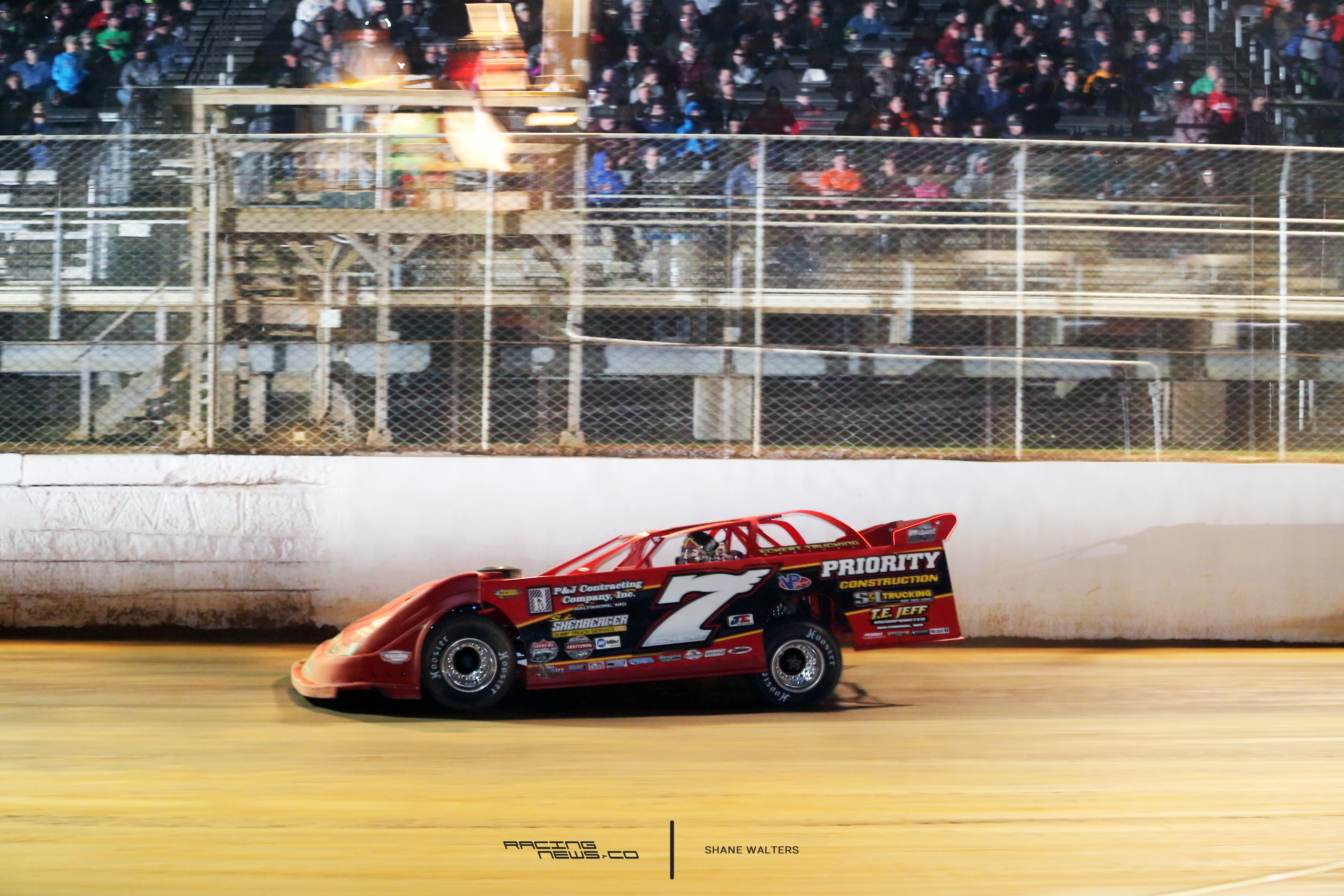 Scott Bloomquist climbed from last to 11th after cuting a tire late in the 50 lap event.

Trent Brenneman, local hero made the main event. He just picked up his first ever dirt late model win last week. Making the national A-Main could be considered a win. Unfortunately, he didn’t finish the race. The race teams of Mason Zeigler and Gregg Satterlee are based in Pennsylvania as well.

Rick Eckert talks about Port Royal Speedway, “It was an awesome race track tonight. You could run low, middle, or high. This facility has turned out to be one of the best in the nation. It’s one of the best kept secrets out there.”

Rick Eckert talks his race winning car, “I couldn’t get going early-on and I dropped back a few spots, but I finally found a line that worked well and we were able to get back to the front.” 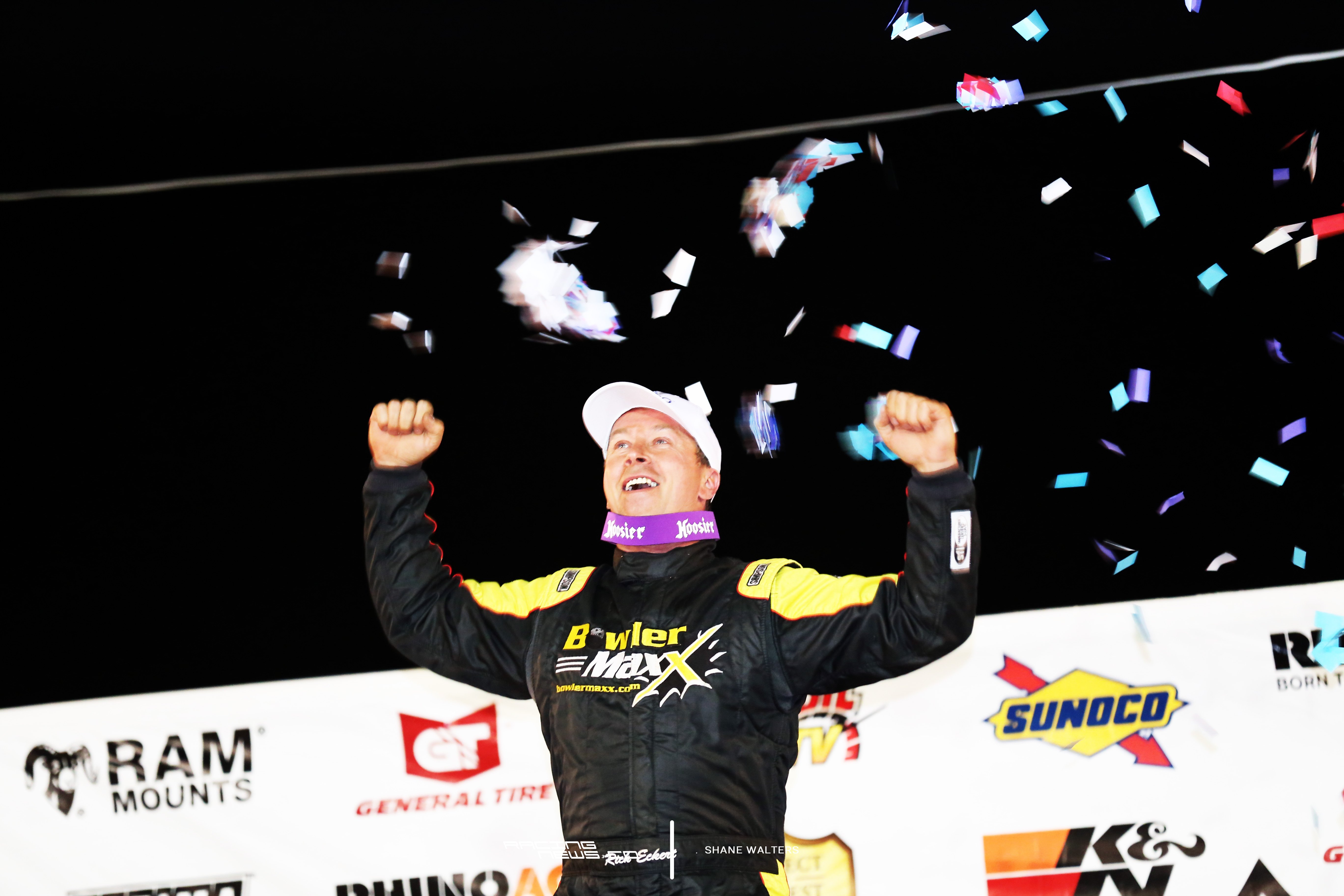 What won him the race? He Rick stated, “The frontrunners started fading a bit, and that’s when I started gaining on them. We had a good restart there and that made all the difference. He [Satterlee] got out in front and I thought it was going to be a long night for the rest of us, but those caution flags kept it close.”

He has nothing but positive things to say about the track, “This is why people keep coming back here. Not only is the facility nice, but they run an efficient program, and the track is raceable from start to finish the entire night. All I can say is that things are going to keep getting better and better for this place.”

Gregg Satterlee discuses the second place run, “I hate to lose a race like that. We had a great car all night. This is one of my favorite tracks and we always seem to run well here. They had a large crowd here tonight and you want to win in front of them. Rick [Eckert] had a good car. The cushion started to get thinner and thinner up against the wall.”