Racing Artist Sam Bass – Getting the Word Out – #HelpSamBass

No, he didn’t ask for it. But naturally the motorsports community has gathered behind the well-known livery creator.

He’s NASCAR’s first officially licensed artist. It’s beyond car designs. He’s created NASCAR posters, magazines and even guitars. Enough motorsports work to fill an entire warehouse at the Sam Bass Museum. A museum in a brand new location that just opened in October 2016. Now, he might lose all of that. A business that took him nearly 40 years to build.

He wouldn’t tell anyone but Sam Bass is sick, in desperate need a new kidney. As you can probably assume, a new kidney isn’t cheap, at all. But he doesn’t have a choice. It could force him into bankruptcy. An auction was already scheduled by the Iron Horse Auction Company to put everything up for sale on May 3rd, 2017. The only thing that could prevent that is help from the NASCAR community.

Medical costs took Sam Bass by surprise, “It is a combination, almost like the perfect storm. Medical costs have just absolutely floored me. But it’s the medical costs in conjunction with the downturn of the NASCAR economy over the past eight years in particular.”

News spreads quick in the NASCAR garage. Drivers and teams have since gathered behind the artist, “The whole thing about needing the kidney transplant and the pancreas transplant, well, I had shared that information with a friend. I wasn’t going to say anything about it. But it got posted to social media. All of a sudden my Facebook and my Twitter start blowing up. People were asking me questions about it.”

He continues to work, “What I’m going through is very, very hard. My kidneys are operating at only 12 or 13 percent. Because they are not filtering right I wake up every morning sick to my stomach. I get fatigued very easily. But I’ve got deadlines to meet. I have bills to pay. I have to take care of my employees and everything. I take this very, very seriously. But it is a struggle. I come in the office every morning at 6 or 7 and do not leave until 9, 11, 12 … I was here night before last until 3:30 in the morning.”

Sam Bass is the Picasso of NASCAR

How did this start? “The whole thing started with a blister on my foot in 2005 that I got while I was in Daytona. Hindsight being 20/20, if I had laid in bed for a couple of weeks and let that thing heal the way I should have, instead of keeping schedules and doing appearances and making deadlines, that blister would not have become an infection that ended up, over the next three years, costing me four bones in my foot. 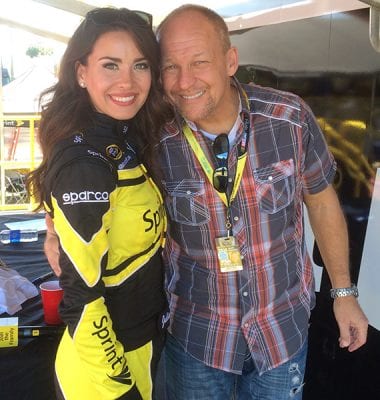 Now a funding campaign has been created. All donations will go directly to Sam Bass, without Uncle Sam stepping into the picture. Dale Earnhardt Jr, Jeff Gordon and Jimmie Johnson gathered together to make the first major donation to Sam Bass. Together, they put in $50,000 to get the campaign rolling. But that’s not enough, a drop in the bucket.

His response? Tears, “I don’t mind telling you that when I read what Jimmie Johnson, Jeff Gordon and Dale Earnhardt Jr. were doing for me with their donations, I literally cried. I have worked so hard with those guys over the years. I created their first Cup cars. I’ve done design work for them. I respect them so much. But never in a million years did I expect them to do what they did.”

It doesn’t stop there. Sam has a long way to go. This weekend at Phoenix International Raceway Timmy Hill is running an awareness campaign on his racecar. The hashtag #HelpSamBass is displayed prominently. Basically, the team didn’t have a sponsor for this weekend. Instead of entering a blank car, they went to the drawing board. The decals were donated and the new Sam Bass machine was un-loaded at Phoenix.

Sam Bass comments, “Thanks so much MBMMotorsports for EVERYTHING that you guys are doing for me! I am overwhelmed by your kindness and generosity!! Cool Car!!!”

Visit Go2MRO.com where you can make a donation to help racing artist Sam Bass.

Kyle Larson abandoned by NASCAR sponsors after use of n-word

Kyle Larson explains his use of the n-word; Expresses interest in NASCAR return