The Dale Earnhardt Jr 2017 Axalta car has been released. Dale Jr’s 2017 car was released this morning via a facebook video.

The photo album below show the 2017 Dale Earnhardt Jr Axalta Racecar. It also shows the new Axalta firesuit for the upcoming racing season. The official video announcement is also posted below.

Dale Earnhardt Jr makes his return to NASCAR racing in 2017, following an injury during the 2016 season. The new Dale Jr car will compete in the upcoming 2017 Monster Energy NASCAR Cup Series.

Sam Bass is the designer of the 2017 Axalta NASCAR racecar. He calls the paint scheme ‘Flash Point’. He says, “I thought that was a pretty cool name and I definitely think people are gunna see it.” 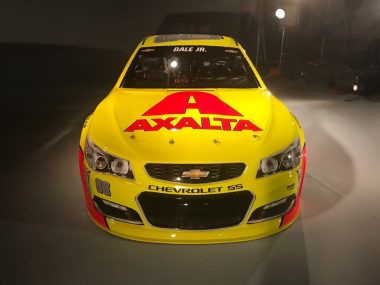 Dale Jr talked about the 2017 Axalta paint scheme as well, “Yeah, it’s a very bright car. Really beautiful. I hope you guys like it.”

Beginning in 2016, Axalta became a primary sponsor of the No. 88 Chevrolet SS team of driver Dale Earnhardt Jr. for 13 Sprint Cup Series races. They Alalta sponsorship increased of three per season. Axalta will also be featured as a major associate sponsor during all non-primary events.

In 2016, Dale Jr’s NASCAR season was cut short. Dale Earnhardt Jr was sidelined with a concussion. That pulled Jeff Gordon out of retirement as he became the fill in driver for the #88 Nationwide and Axalta cars.

Dale Earnhardt Jr, age 42, has 26 career Monster Energy NASCAR Cup Series victories. The Kannapolis, North Carolina, has collected 252 top ten runs in his 595 NACSAR Cup Series starts. Dale Jr is a two-time winner of the prestigious Daytona 500, winning in 2004 and 2014. Dale Jr is NASCAR’s Most Popular driver, for the last 14 years. An award handed out, as voted by fans.