The 2017 Nationwide 88 car has been switched from silver to white. Dale Earnhardt who had a lot of influence in the new design shared a detailed explanation of the color change. The 2017 Nationwide white car is mostly a result of a spotter issue. 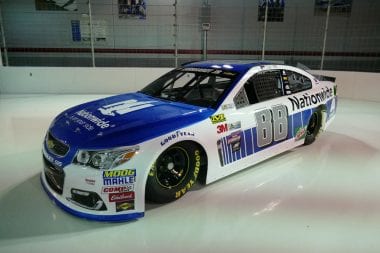 Silver blends in with the grey race track surface while white is a stark contrast to the racing surface. This is especially helpful to TJ Majors on the larger tracks where the spotters stand can be nearly a mile away.

Dale Earnhardt Jr explain himself, “I love the silver and blue we ran last year. But a lot of times at the racetrack that silver would sort of blend into the asphalt. And it’s difficult for the spotters as well. When he’s trying to spot a car that’s at a two mile racetrack or a mile and half racetrack.”

The 2017 Dale Jr paint scheme fixes that spotter issue, “So, TJ will love this car. He’ll be able to see this thing coming a mile away. And so will the fans.”

Earnhardt himself had a lot to do with the 2017 Nationwide paint scheme. He stated he likes minimalistic paint schemes. He used the word conservative to describe the new look on the 2017 Hendrick Motorsports 88 car.

Dale Jr explained his like of a simple paint scheme, “I like to keep the car understandable, I guess. When you decal a racecar. You got a lot of contingency decals, the number, the sponsors, the primary sponsor. So, the paint scheme itself, I like it to be understandable once you have the car completely decaled. Some of our ideas trend toward the conservative side.” 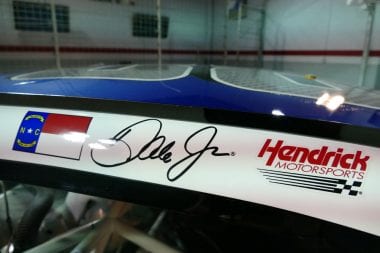 Nationwide and Dale Jr. officially teamed up in 2009, but it was a connection a long time in the making. The partnership was an extension of his family’s longtime relationship with Nationwide off the track – the Earnhardt family has trusted Nationwide for their insurance needs for more than 35 years. Dale Jr. has continued that relationship with his own 25-year relationship trusting Nationwide to protect everything from his cars to his house to his business and even his dog, Gus.

In September of 2014, Nationwide announced an agreement with Hendrick Motorsports to become the majority primary sponsor for Dale Earnhardt Jr. and the No. 88 car for 21 races in each of the 2015-2017 seasons.

In its debut season in 2015, Dale Jr. and the No. 88 tallied 3 race wins, 16 top-5 and 22 top-10 finishes in 36 Sprint Cup Series starts. Nationwide takes great pride in being able to protect the things that matter most to Dale Jr., his family and his team, and showing his fans that Nationwide is on your side.

In 2016, Dale Earnhardt Jr was sidelined early in the season with concussion like symptoms. Alex Bowman and Jeff Gordon were fill in drivers of the 2017 Nationwide 88 NASCAR racecar

Related: Dale Earnhardt Jr out for the Remainder of the 2016 Season

Recently, plans have begun to be made to get Dale Earnhardt Jr back behind the wheel. He is scheduled to be the primary driver of the 2017 Nationwide 88 car.

View the photo gallery of the 2017 Nationwide Dale Jr paint scheme below.

Dale Earnhardt Jr and Nationwide will continue their partnership