Aric Almirola was involved in a scary accident last night at Kasnas Speedway. Today, the team released that the driver is suffering from a compression fracture to his T5 Vertebra.

Richard Petty Motorsports has issued a medical update on their racing driver. That statement can be viewed in full below. 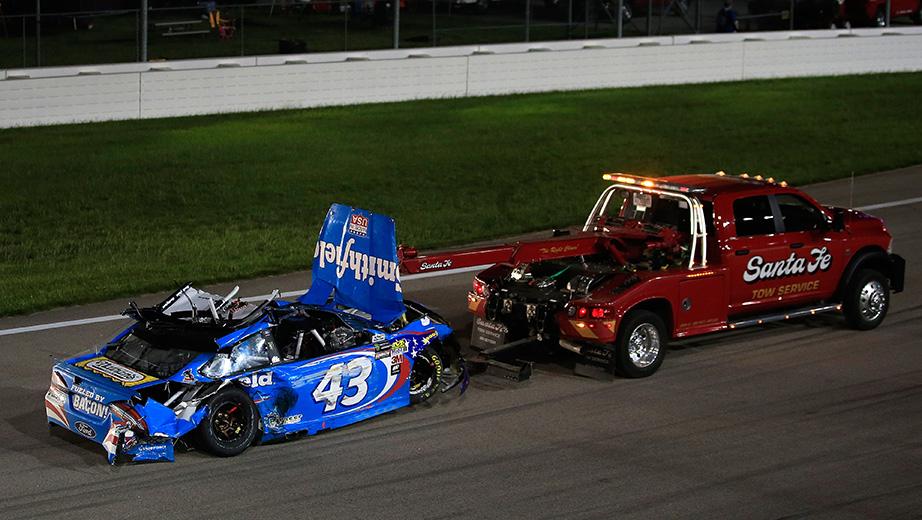 Joey Logano blew a brake rotor on corner entry. The moment he stepped on the brakes, the car jumped sideways. That’s where he clipped Danica Patrick and put her nose first into the wall.

Aric Almirola approached the accident scene at full speed. He was hard on the brakes, but the brakes didn’t work too well as he slid through all the oil. Sideways, he hit Joey Logano and was lifted into the air.

His #43 Monster Energy NASCAR Cup Series machine was launched 4-5 feet into the air. Then, the rear end slammed back to the ground. Which is likely where he suffered his injury.

He quickly put the window net done. However, after that he jumped on the radio complaining of back pain. NASCAR officials cut the roof off the car at Kansas Speedway.

Aric Almirola was then placed him on a stretcher and airlifted the driver to a local hospital. Richard Petty left the track in route to the hospital.

Today, Aric Almirola is scheduled to return to North Carolina.

“Aric Almirola, driver of the No. 43 Richard Petty Motorsports Ford, has been released from a local Kansas hospital and will fly back to his home in Mooresville, N.C. today.

Almirola suffered a compression fracture to his T5 Vertebra after a multi-car accident at Kansas Speedway Saturday night.  Almirola is mobile and will follow-up with his doctors in Charlotte.

Feel bad for @aric_almirola. What makes this injury even worst is he will feel ready to return to racing before his body will allow him to.
-Denny Hamlin

I had compression fractures of 3 vertebrate. @aric_almirola will have to use patience in recovery. His great conditioning will help him.
-Jeff Burton

Great news to see @aric_almirola will be home today! Thank you to all the safety workers who train so hard to help.
-TJ Majors

Hoping for a full and speedy recovery for @aric_almirola.
-Stewart Haas Racing