It’s a rare opportunity to see both the ULTIMATE Super Late Models and the FASTRAK Pro Late Models in action on the same day, at the same race track. But that’s the way track owner Bill Sawyer does things at Virginia Motor Speedway because this will be the second time this season an event of this stature has taken place at the Taj Mahal of American dirt tracks. 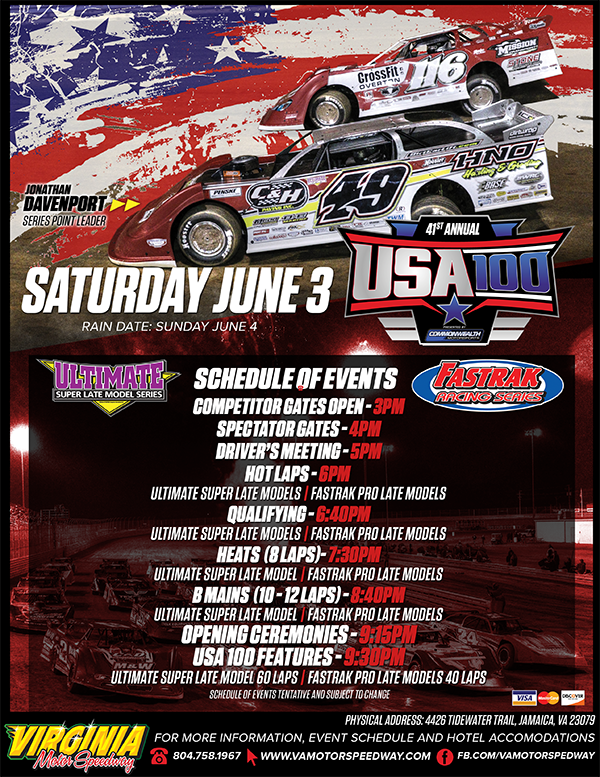 Coming into the USA 100, there is a three-way battle for the ULTIMATE Super Late Model Series point lead. Jonathan Davenport of Blairsville, GA leads the ULTIMATE SE point standings with Tyler Millwood of Cartersville, GA and Jason Welshan of Maryville, TN right on his heels. Millwood is also the Autolite/Fram/DirtOnDirt.com Rookie of the Year point leader.

The defending and two-time ULTIMATE SE Champion Dennis Franklin of Gaffney, SC is a top five driver in the ULTIMATE points chase, despite getting off to a slow start to the 2017 season. Franklin has had success at Virginia Motor Speedway through the years, and will be looking for his first win of the season on Saturday night.

Brandon Overton of Evans, GA took his first of two ULTIMATE victories this season at VMS on April 8 winning the $20,000 top prize in the Aaron’s King of the Commonwealth. Another two-time ULTIMATE winner this season is Dale McDowell of Chickamauga, GA, who finished second to Overton at VMS in April. McDowell is fresh off a $10,000 ULTIMATE win on Monday night at Volunteer Speedway in Bulls Gap, TN.

Earl Pearson Jr. of Jacksonville, FL will be making the trip up the Eastern Seaboard this Saturday for the USA 100 in search of the $20,000 top prize. Pearson also has an ULTIMATE win this season.

On Saturday at Virginia Motor Speedway, the pit gate opens at 3 p.m., with ULTIMATE Pre-Race Registration and Technical/Safety Inspection from 3 p.m. to 5:30 p.m. Drivers need to bring their helmets and head and neck restraint systems to Tech along with their race car. The Drivers Meeting is scheduled for 5:30 p.m., and Hot Laps are set for 6 p.m.