Is that not the silliest thing you’ve ever read?

Dale Earnhardt Jr is a known Washington Redskins fan. Needless to say, he wasn’t super thrilled to find out he would be driving a car sporting the logo of the Philadelphia Eagles in an upcoming Monster Energy NASCAR Cup Series event.

Axalta was set to promote the All-Pro Teacher program. The Eagles logo would share placement on the car in support of the good cause. The Philadelphia Eagles NASCAR racecar graphics were released back in April. The deal was set, the NFL NASCAR machine was set to unload at Pocono Raceway on June 11th.

The Eagles on the other hand when very excited. They tweeted, “Hey @DaleJr, #Eagles green looks pretty good on your @axalta car. #FlyEaglesFly”

When the idea was announced Dale Earnhardt Jr took to Periscope, “I’m really sad about that, being a Redskins fan. It was very hard to wrap my brain around it, but what I am happy about is helping them promote the All-Pro Teachers charity and organization that the Philadelphia Eagles have, where they basically acknowledge teachers that are really great teachers.”

He concluded the topic with, “I hope that my Redskins pals, the fandom that I’m part of, I hope you guys don’t disown me. Anyways, HTTR — Hail to the Redskins.”

However, just as Dale Earnhardt Jr was coming around to the idea, the plans have changed. The NFL offices have stepped onto the scene and they aren’t having any of it.

Within the halls of the NFL office, they sported nothing but straight frowns at the entire idea. They have now canned the NASCAR Eagles paint scheme. Why? I promise it’s about to get ridiculous. The NFL basically told the Eagles that any NFL logos can’t be used in any conjunction of promotion with another sport. 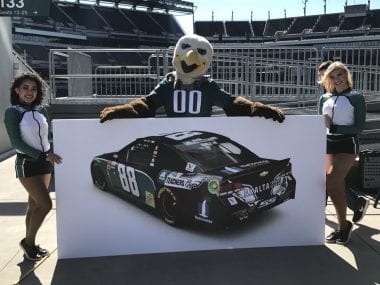 In a statement from the Philadelphia Eagles, “Having been reminded of the NFL’s policy, we understand and respect their point of view. While we are disappointed that we will not have the opportunity to increase the visibility of the Axalta All-Pro Teachers program through the Pocono 400 this year, we remain committed to supporting STEM curriculum and the educators who inspire our youth through our relationship with Axalta.”

Basically, the NFL doesn’t want any promotion from NASCAR, or any other sports for that matter. All of the above translates to, “thanks, but no thanks” and possibly a mix of “We’re too good for your old Southern boy sport.”

The dinosauric lawyer-istic approach looks really bad on the NFL’s part. This was basically a charity NASCAR paint scheme. A wrap that would have been displayed on the racecar of NASCAR’s most popular driver. The same driver who has a few extra sets of eyes on him in 2017, given it’s his final season of NASCAR Cup Series racing.

In a brief statement from Axalta. They stated, “Without doubt, we are deeply disappointed that the Axalta All-Pro Teachers car will not run.”

“I have no issue,” Dale Earnhardt Jr said upon questions of the news.

Dale Earnhardt Jr elaborated, “It’s really just unfortunate for Axalta and a good crossover promotion. That would be pretty cool, even though, obviously, we joked around being a Redskins fan and all that.”

He concluded, “But it was going to be a pretty fun promotion, and we are still going to try to maximize what opportunity we can with it.”

This incompetence level was kind of expected from the NFL offices to be honest. After all, this is the same organization that as recently as 2010, tried to proclaim that beating your head into another head, didn’t cause CTE. The NFL didn’t take concussions seriously until Congress begun to step in, back in 2011.

5 seconds of head-bashing excitement, stop. 5 more seconds, stop. Now I remember why I don’t watch Football. Off to the races.