The track received heavy rains in the days leading up the event. Drivers were concerned ahead of the green flag. They held a meeting and offered a quick solution to get the track race ready. If not, it was hinted that ‘some drivers wouldn’t be competing that night’.

That solution was to grade the track. Basically, shave off the top layer of dirt, getting down to the harder, less volatile surface below.

Doing this allowed the UMP Hell Tour event to continue. However, it left the dirt track with a problem. Rocks. Those rocks now rest atop the new racing surface of Daugherty Speedway.

Despite the re-work, the Dougherty Speedway Summer Nationals race was shortened to 30 laps. The event was originally scheduled for 40-lap show around the 3/8 mile.

Beyond that, DIRTcar UMP officials also declared it a show-up points race. Meaning, the entire field was awarded the same amount of points.

The track stated, “We realize now that it was a mistake in bringing the surface back to what we spent so much time and money to repair.”

Now, the track has gone to work, again. They are bringing in new clay to repair the track back to what it was. In doing so, they are forced to shut-down for several weeks.

They are scheduled to re-open on August 12th.

The updates below are directly from Daugherty Speedway.

Attention Fans and Drivers. An update. We just met with the crew at Hetrick Trucking. We have identified some good rock free red and yellow clay that is a few hours south. We have a plan in place for Hetrick to bring in a dozer and rip up and de-rock the surface after hauling in good clay. We are coming up on the dry season so it will be perfect to move dirt. We will begin the mesh process of new clay with old substrate once the clay has been delivered.

What does this mean? As we asked, please be patient with us. We are planning this all out to make the best possible race surface for our drivers and fans. We have no exact timelines, but we will probably schedule a practice session once everything is complete that will be open to any driver to allow us to get feedback from drivers and see if our progress is good enough to start back racing. If it isn’t, we will continue to work on the track until we are there.

Again, thank you for your patience during this process. We would have hoped we could wait until the fall like last time, but we were told July is the best time due to dry conditions and being able to break down the dirt to separate any rock.

Thank you for your help during this repair. 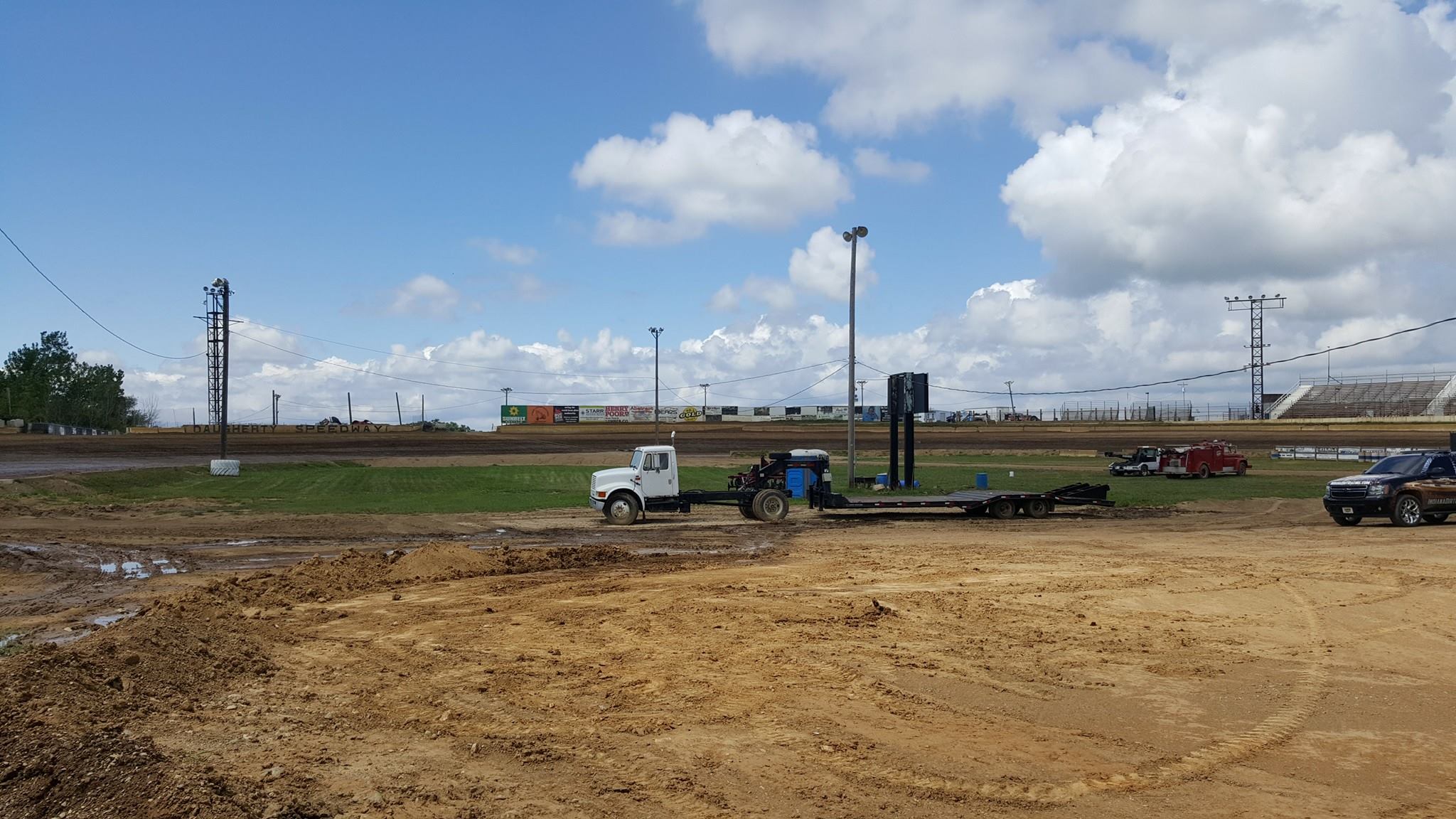 Attention drivers and fans. We had a great turnout of drivers and fans for the Summer Nationals Hell Tour. Unfortunately a few of the drivers didn’t like the track conditions.

It was the best we could do when we couldn’t even get on the track until noon the day of the race due to all of the rain. 9 inches this week to be exact. When the track became a little rough from the wet dirt, Sam convened a meeting and they basically said to grade the track down or several wouldn’t run. Well, anyone that knows anything about dirt and substrate knows that if you grade down, you get what is beneath it. So the rocks came up as a requirement of the drivers wanting us to grade the good dirt off.

This has caused the track to have rock from below back in the main surface. We need to repair the surface and remove any and all rock before continuing our races. So we have removed a few dates from the schedule yo give us ample time to repair the track. We are sorry for any inconvenience but we felt at the time it was better to listen to the drivers of the Hell Tour since it is our biggest race of the year. We realize now that it was a mistake in bringing the surface back to what we spent so much time and money to repair.

We hope you understand that we want the best for our weekly drivers and feel that just “patching” the track is not in the best interest of our long term success. We just purchased a new grader that we used Sunday that will assist us in giving our weekly drivers a better race surface.

NEXT POST
Mystery racing trailer burned to the ground