The next day, DIRTcar called the race ‘official’ after competing 21 laps.

Below is a round-up of discussions.

I can’t believe that 20 laps out of 60 is enough to be a full show especially when we are talking 10k to win. A lot can happen in 40 laps. Don’t like the fact that all but 3 drivers don’t like the way this has went.

Not making up the race was never brought up to us when it was discussed. The divers want to make this race up I don’t like being used as the excuse. I’ve talked with the promoters and they said they would like to make it up with another show which is what a lot of the drivers wanted. Feel really bad for the fans on this one.

Hopefully something comes out of this and it can b fixed.

So I am really disappointed for all the fans at Peoria speedway. Because I heard today they don’t want to make up the race.

Witch is BS for all who spent the extra money to go there. I want to set the record straight.

What they decided today was not in the options texted to the drivers. If u read option A B C. I don’t see anything about cancelling the race. I want the fans to know that some drivers are all for coming back and finishing the race.

I was mad at first at Peoria speedway. Cause I always support them on special events.

But in the last five mins. I found out Peoria speedway wants to make the race up. 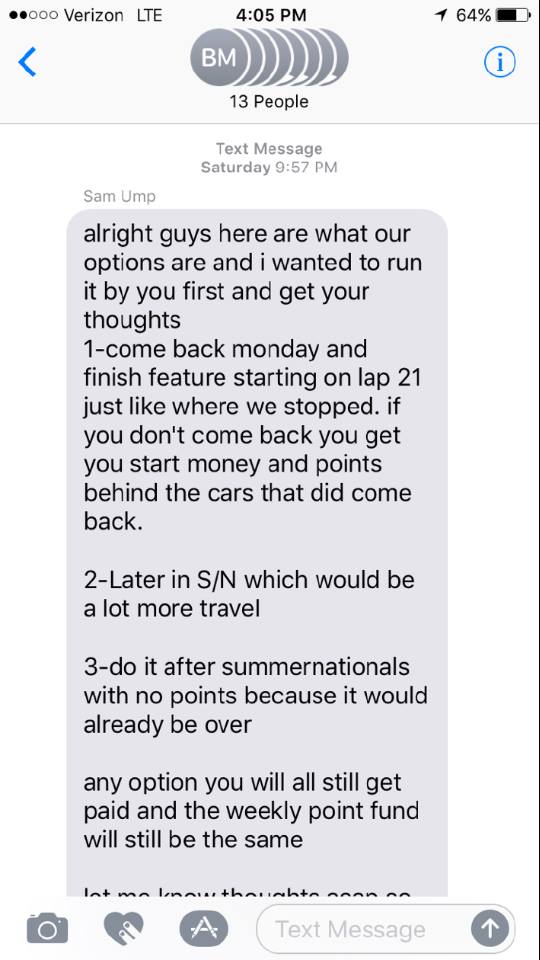 The Peoria Speedway stop of the DIRTcar Summer Nationals has been declared a completed event following a severe thunderstorm that halted the feature event after 20 laps.

The track is still too wet, and drivers have other commitments on Monday, which is their only free day on the relentless Hell Tour schedule. Meanwhile, the Summit Racing Equipment Modified Nationals portion of the event will move to Wednesday, June 21.

The event will recognize drivers for the positions they were running when the race was called, making Billy Moyer Jr. the official feature winner after surging past his father, who was setting the pace until then, and taking command on lap 15.

Bobby Pierce also passed the elder Moyer for second place on lap 15 and was looking to mount a challenge on Junior when a caution flag flew on lap 17 for Roger Rebholz’s stopped car in turn two. Pierce stuck with Moyer Jr. on the restart before the brewing battle was stopped by the rain on lap 20.

The elder Moyer was running third when the race was red-flagged, Brian Shirley was fourth and Billy Drake was fifth. 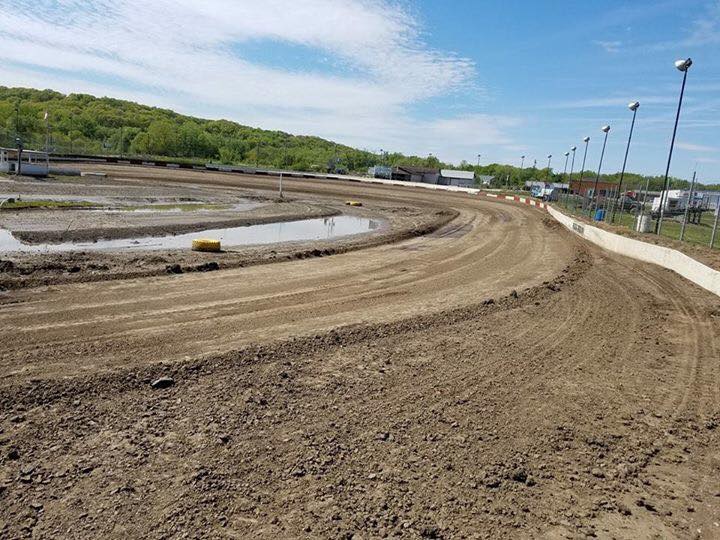 It has been determined that the Late Model portion for our Summer Nationals race this past Saturday is now a complete show. With the drivers having other commitments on Monday, June 19th, which is their only free day on the relentless Hell Tour schedule, making up the race tonight was not possible. The drivers will be scored the way they ran on lap 20 when the rain came.

After the Late Model B-Main, we have to allow some time for those drivers to get ready for the A-Main, so we did a very quick intermission with some track prep to try and make for the best races possible for everybody. We then did a quick run through of the pits because we wanted to send the Late Models out first, and it was clear we would have a staging delay if we did that. Most of the cars were still sitting on their lifts getting ready. Whether we waited on them to get to staging, or sent out the crate modifieds and cut their race short as we did, the result likely would have been nearly the same.

Peoria Speedway policy is as most, once a feature is complete, it’s considered a complete show. We would then have double features on another night with a full show on top of that, and charge a new admission price.

With that being said, we will be making up the Modified and Hornet features missed this Wednesday, June 21st, your armbands and tickets will be honored from Saturday night to get in on Wednesday. We are just trying to make the best of a very unfortunate situation, therefore we are changing the policy to try and get the fans as much racing as we can, that they paid to see without incurring any more costs.

Fields are locked, no cars will be added.

Armbands and Tickets from Saturday will be honored.

If you were unable to make it to the speedway on Saturday, it will be $5 to get in the Grandstands, and $10 to get into the pits.