Light poles and flag stands poke through the surface of water in Peoria, IL. Underwater is Peoria Speedway, a high-banked 1/4 mile dirt track. A collection of media below will showcase the current Peoria Speedway flood situation.

On Sunday, the Illinois River reached 17.68 feet in Peoria, IL. That was enough to make the race track all-but disappear from aerial view (pictured below). However, the river hasn’t yet reached it’s highest levels.

According to the latest data from the National Weather Service, the Illinois River crest in Peoria, IL won’t be reached until Thursday afternoon. The estimated crest is expected to be 23.3 feet, nearly 6 feet higher than levels recorded on Sunday. The highest level ever recorded for the river was 29.35 ft in April 23rd, 2013.

Peoria is not the first nor will it be the last dirt track to go underwater. It’s happened to many tracks all over the country, since the beginning of time. Back in December 2015, I drove over to Federated Auto parts Raceway at I-55 to take flooding photos of the Pevely, MO track while it was underwater. In this scenario, most tracks are up and running within a few weeks or months.

Peoria Speedway released their first flooding update on April 30th. Stating, “As many have seen on social media or have heard we are under water at this time. We will do everything in our power to rebound back from this as soon as possible. Thank you to everyone for the concerns.”

Timing for the flooding isn’t so great. In just a few weeks, Peoria Speedway is scheduled to host the largest race in the track’s history. On Saturday June 17th, the bullring dirt track will pay $10,000.00 to the winner the UMP Summer Nationals event. That’s the largest single race payout in the history of the track. 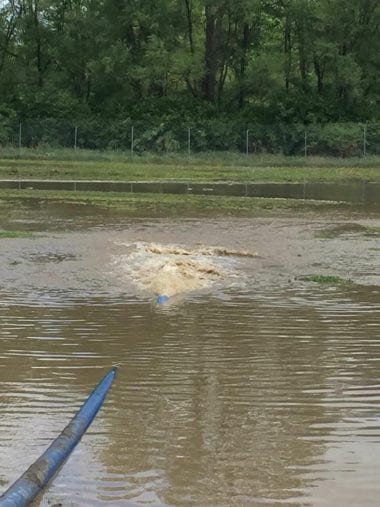 Peoria Speedway owners are Brandon Dean and Jason Plumer. Just 3 years ago, they saved the track from closure. Now they are facing unique challenges from Mother nature. Together, are now asking for help. They are in need of more pumps at the race track by Today or Wednesday. If you are in the area and have a water pump, they’d love to see you. As they stated, “The more pumps the better.”

As of now, Peoria Speedway track workers have a single 8-inch pump and they were recently in the works of finding an additional pump. Brandon Dean drove 1.5 hours to Springfield, IL where he picked up the pump they are using now. Clean-up help has been requested as well, “We are on the way to get a second pump. When water is down and we start clean up of debris if you would like to come help your more then welcome.”

How much water are they pumping out of the speedway? Track officials have rough estimates, “By our calculations about 9,100,000 gallons to go.” With a single pump it’s going to take awhile. If they secure a second or third pump it will shorten up the drainage process dramatically. On how long it will take? The owners stated, “Trying to secure another pump. At the rate of the current pump it’s roughly 120 hours of pumping.”

No flood insurance was available for Peoria Speedway. All repairs and damage prevention are being handled out of pocket by speedway owners. Track officials would greatly appreciate any help or support from the dirt track racing community. Peoria Speedway will re-open and they are hard at work to make that happen. The more help they have, the faster promoter Jeff Hall can get back to work on filling the grandstands.

The efforts from the track owners, staff and fans should be applauded. Day and night, they are working relentlessly to get the track back up and running as quickly as possible.

Peoria Speedway held it’s grand-opening back in 1948. Next year will be the 60th anniversary of the dirt track in Peoria, IL. The track will host the American Modified Series and MOWA 410 Sprint Cars later in the 2016 racing season.

View the Peoria Speedway flood photos as well as the aerial video below.