NASCAR announced Wednesday morning that it will standardize at-track team rosters across all three national series in 2018, providing a structure for the number of personnel working on each vehicle during the course of a race weekend.

The biggest competition impact from the rules update is the the number of crewmembers who go over the wall for pit stops moving from six to five.

According to Steve O’Donnell, NASCAR Executive Vice President and Chief Racing Development Officer, the overall objective for standardized rosters is to promote better competition through increased parity, to improve safety and to cast a brighter spotlight on the sport’s team concept.

“As much as we can possibly level the playing field and introduce new winners, that’s really the goal and what we want for the fans,” O’Donnell said. “And so if you look at these initiatives with the over-the-wall crew going to five members, that fits into our overall structure from a roster standpoint. We feel like that again puts the focus on the athletes and also continues down that line of putting the focus on the teams and opening it up to as many teams as possible to continue to win races and therefore put a better product out there for the fans.”

At-track rosters for all three series will fall under three headings: Organizational, Road Crew and Pit Crew. Job descriptions and roster maximums for each category:

• Pit Crew: This designation refers solely to team members who perform over-the-wall service during pit stops. The maximum is five for all three series.

The exceptions to these numbers are slight. Monster Energy Series teams are allowed one extra road crew position at Indianapolis Motor Speedway and the three road courses (Sonoma, Watkins Glen, Charlotte), where teams often use multiple spotters. Also, an additional road crew roster spot will be allowed for XFINITY teams at 10 races and Truck Series teams at five.

It will be left to the teams’ discretion on how to best assemble their team — including the over-the-wall crew — within the roster limits. All rosters will be made public — for fans and media — before each race weekend.

The decrease in pit-crew personnel on an active pit road continues a trend in recent years. NASCAR reduced the number of over-the-wall crewmembers from seven to six in 2011, when advances in fueling systems eliminated the need for a catch-can. NASCAR also instituted a high-tech pit road officiating system in 2015 that made over-the-wall officials unnecessary to monitor pit stops.

“First and foremost, it’s safety, and we’ve taken some steps in our own house in reducing the number of officials on pit road,” O’Donnell said.

“We used to have seven crewmembers over the wall for the race teams as well; we’d reduced that to six. And this is just another evolution with five, to make sure that the environment is as safe as possible for the race, and then also, candidly, to continue to focus on the athletes. We’ve got some of the best athletes in the world out there on pit road, so we’ll want to showcase them in as safe an environment as we can,” O’Donnell concluded. 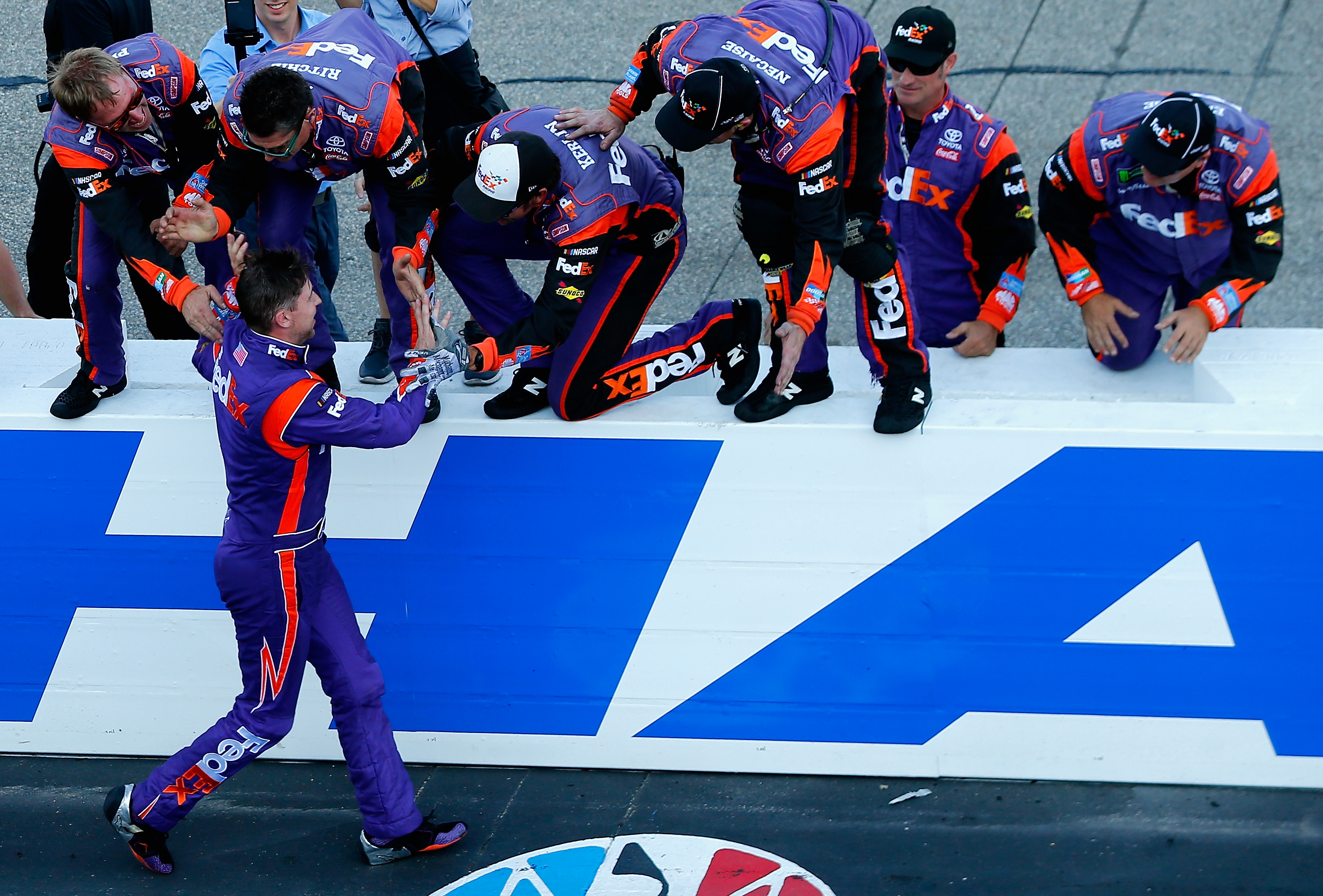 From 2011 to 2017, the standard six-person pit-crew configuration included a jackman, a fueler, two tire changers and two tire carriers (one each for front and rear). For routine four-tire stops starting next season, teams could forgo one tire carrier and devise a new framework for servicing their vehicles.

The responsibilities of the fueler will also be narrowed, with other over-the-wall duties such as wrenching out chassis adjustments prohibited in 2018.

“We wanted to get out ahead of it as quickly as we can, and teams are probably practicing right now,” O’Donnell said about the timing of the announcement. “If I know them, they’re already getting ready for Daytona so that’s something we wanted to get out in front of them, working with the industry.”

In another effort to bring further recognition to team members, rostered crew will be assigned letters or numbers worn on their uniforms and on armbands to identify their duties.

“Those are superstars as well in our industry,” O’Donnell said. “The more we can allow fans inside that window and the media, candidly, to have you handed a roster prior to the race weekend opening up to know who’s on each team and what role they’re going to play for that weekend.

“Short-term, it’s going to take some getting used to, but long-term, I think it’ll really help develop some of the other names that have been a part of this sport for a long time and emphasize why you’ve always heard drivers talk about how this is a team sport. I think it’ll help showcase that for the fans.”

As has been the case with many recent developments in the sport, the advent of standardized at-track rosters was achieved through collaboration with race organizations, a process that O’Donnell said produced favorable feedback.

“I think it’s been really positive,” O’Donnell said. “Everybody obviously wants to see it play out on the track, but everyone kept in mind that our goal is to make the racing even better and to allow the possibility for even more teams to win a race and compete on pit road. So the idea in putting this in place has been very much embraced by the race teams, but obviously we want to see it in action and make it a positive thing for our fans going forward.”

Related: NASCAR pit stop guns could be standardized in 2018

NASCAR pit gun snaps in half during Martinsville pit stop