Tim McCreadie on Tony Stewart: “He just gave some words of wisdom. I appreciate it. I don’t think I’ve ever helped him. So, it’s cool that he’s helped me.”

Last weekend, Tim McCreadie showed up at Eldora Speedway with a beat up box trailer from 1996. He parked it next to the shiny double decker rigs and unloaded for the World 100.

Following advice from Tony Stewart, McCreadie went on to claim the $53,000 winners check that night on Tony’s half mile dirt track. It was his first win in several months after a year up ups and downs for the #39 team.

Following the race, McCreadie loaded up and ran a polish victory lap with the horn blaring. It was an awesome moment. A moment that has now been put into print via a T-Shirt.

Here’s the thing on the tiny trailers though…

Those national tour guys have big haulers with good reason. The first being, they live on the road. By that, I mean these teams might as well put a mailbox on the fuel tank because they literally spend more time on the road than they do at home. They aren’t driving 10 miles to and from the race track, where an open trailer would do just fine.

If it’s decent sized team, that’s a lot of people to put in a hotel room for 100 or so nights of the year. Check-in rates add up in a hurry. It doesn’t help that for the crown jewel dirt late model races, they tend to jack up the price of a room. Something that should certainly be punishable by fire.

I’m one media guy that follows the Lucas Oil Late Model Dirt Series. I spend $10,000 a year on shitty hotels which sometimes aren’t even cleaned when I first open the door. I’ve booked hotels, arrived at 2am only to find out my room was given away. In middle America, hotel options are limited.

I’m in one as I type this, the air conditioner knob is broken clear off. These hotels, they’ll drive you crazy in every way imaginable in addition to a few more ways that you can’t imagine. They’ll strip you of your sanity.

Another reason teams need those big haulers, the ones that seem to drive people crazy, is for the double decker addition. Backup cars can fit in the box along with the primary car. McCreadie can only haul a single car.

He’s had to leave the race track a few times after being involved in an accident on night one of a two-day show. It happened somewhat recently in the Dirt Million, a weekend that was going fairly well for him.

With the big rig, the backup would have been unloaded and a provisional would have been taken. Instead, they had to drive home, in the middle of the tour instead of heading to the next race. Then they rejoined the tour after making rush repairs at the shop. Who knows how many extra miles on the road that kinda hassle required and more importantly, how much sleep was lost.

They say, “Haulers don’t win races.” That’s true. But, they significantly improve the quality of life and the ease of getting to and from the race track. Which does absolutely help you win races.

With all that said…

When you go to a trailer like this. Does it cost you more money to run the tour?

“I can’t tell you. I don’t know that for sure. You gotta get hotel rooms and things like that. We’d have to sit down and figure that out. I haven’t really looked at it,” Tim McCreadie told RacingNews.co at the DTWC.

But, probably. When you use the rig, does the whole crew stay in there when you’re on the road?

McCreadie is referring to the trolls in the comment section. I happened to see a few of those this week.

“So, I don’t know all these people that think all this shit’s brand new. But, they can all come live like me. If they want to. Every one of them.”

“I see a lot of guys that get on the internet and talk about how hard they got it. They can come live my life for a little bit when it comes to trying to be competitive.”

“No. That was ASI. I didn’t talk to them about it. They just did it. I didn’t even know about them until Friday. Maybe the day before.”

The shirts were released to the fans on Wednesday. Tim McCreadie just found out about that, which is a little funny. The shirts are awesome by the way.

They can be purchased at the Lucas Oil Late Model Dirt Series merchandise trailer or online via ASI Racewear. 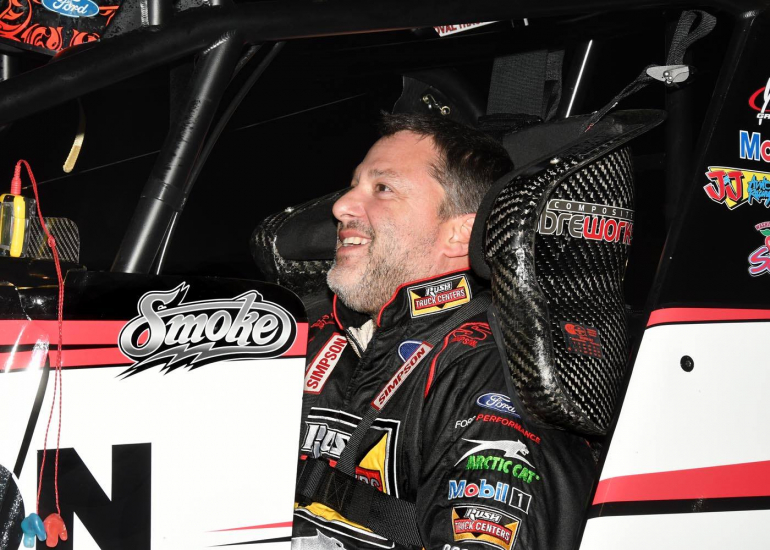 Tony Stewart is the promoter at Eldora Speedway. The former NASCAR champion leaned into McCreadie’s window just ahead of the main event with some advice.

Where did that win come from? Was it the advice that Tony Stewart gave you?

“It’s a lot of everything. I’d take advice from everybody.”

“If a guy of Tony Stewart’s caliber gonna come in and lean into my window and say, ‘Hey, it looks like it’s rubbering on the bottom. Or it looks like the cushion is faster by a half second.’ ”

“You’d be a fool not to listen to a guy like that.”

“He just told me what I thought I should do. I took that into account. No different than when my guys come over and tell me something when I’m not up there watching the track.”

Did you make setup changes after Tony told you that?

“No. We were on the line. It was right before the feature.”

“He just told me that it was a very good track for a big block modified. He wish he would have had it that way for the modifieds during the truck weekend.”

“He said, ‘I really think if you just drive it straight, it would be a good idea. Don’t burn the right rear and don’t slide the nose too much.’ ”

“He just gave some words of wisdom. I appreciate it. I don’t think I’ve ever helped him. So, it’s cool that he’s helped me.”

“When I broke my back, he gave me a ride in his plane. He took me home. Which was nice.”

McCreadie suffered a fractured T-3 vertebra with a bonus of floating fragments following a crash in 2009. That happened during qualifying in a midget at the Chili Bowl Nationals, an indoor dirt race.

“It must mean that he must respect me a little bit. You respect the hell out of how he does it. He’s probably the best personal guy there is in our country,” McCreadie concludes.

Tonight, McCreadie will unload for the final race of the Lucas Oil Late Model Dirt Series season. The race at Portsmouth Raceway Park will pay $100,000 to win. McCreadie starts from the 15th position.

Tony Stewart has interest in returning to the Indy 500

Words of Wisdom from Tri-City Speedway

Tim McCreadie discusses the differences between dirt and pavement racing