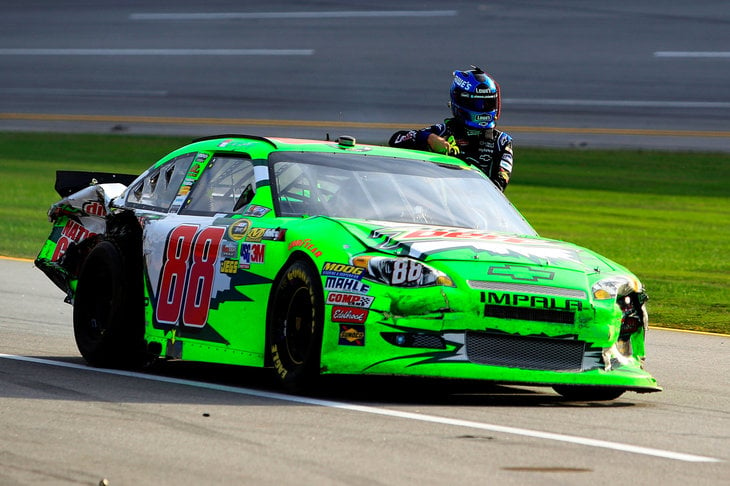 CONCORD, N.C. — Dale Earnhardt Jr. knew something was wrong after hitting the Turn 1 wall hard at Kansas Speedway during a Goodyear tire test on Aug. 29.

But he didn’t realize how much might be wrong until he was involved in another accident last Sunday on the final lap of the Good Sam Road Side Assistance 500 at Talladega Superspeedway. That led to him seeking the advice and examination of neurologist Dr. Jerry Petty, who told Earnhardt on Wednesday night that he needed to sit out at least the next two Sprint Cup races.

Hendrick Motorsports announced Thursday morning that Earnhardt will not be behind the wheel of his customary No. 88 Chevrolet for both this Saturday night’s Bank of America 500 at Charlotte Motor Speedway and the following week’s race at Kansas Speedway. Earnhardt was diagnosed with the concussion Wednesday afternoon in Charlotte, and Regan Smith will be the team’s substitute driver at Charlotte and Kansas.

Earnhardt Jr., car owner Rick Hendrick, crew chief Steve Letarte and Dr. Petty met with the media later Thursday morning at CMS, where Earnhardt admitted he should have gone to a doctor earlier after experiencing concussion symptoms following the incident in Kansas.

“Going into Turn 1, I remember everything about that accident and everything after that accident,” Earnhardt said. “But you know your body and you know how your mind works, and I knew something was just not quite right. I decided to just try to push through and work through it. I had had concussions before and thought I knew what I was dealing with.

“I felt pretty good after a week or two. Definitely 80 or 90 percent by the time the Chase [for the Sprint Cup] started [on Sept. 16], and by Talladega I felt like I was 100 percent. But, at the end of that race, I was hit in the right-rear quarterpanel. It was sort of an odd kind of a collision where the car spun around really quick and sort of just disoriented me. And I knew then that I had sort of regressed and had a setback. Again, you know your body and you know when something is not quite right. And I knew as soon as it happened that I had re-injured myself, for lack of a better way to describe it.”

Earnhardt dropped to 11th in the Chase for the Sprint Cup standings, 51 points behind leader Brad Keselowski, after finishing 20th at Talladega as a result of being caught up in the last-lap wreck. But because Earnhardt was able to drive his No. 88 Chevy back to the Cup garage following the incident — he even gave Hendrick Motorsports teammate Jimmie Johnson a ride on his driver’s side window — Earnhardt was not required by NASCAR to visit the infield care center after the race.

So, once again, Earnhardt waited. But this time, when he continued to have headaches, he decided to see Dr. Petty after consulting with his sister and business partner, Kelley Earnhardt-Miller.

“It was not even half of the impact that I had at Kansas. But it was enough to cause me some concern,” Earnhardt said. “So I went a couple of days, wondering how my body would react, sort of waiting for it to process what was happening. By Wednesday, I was still having some headaches. Those were really the only symptoms that I was having, but I took it upon myself to contact my sister and we talked about seeing a neurosurgeon. We ended up getting steered toward Dr. Petty and met with him.”

Earnhardt said he regretted “being stubborn” and not getting checked out more thoroughly after plowing into the wall at Kansas during the tire test, although he was examined by physicians at the track immediately afterward. But Hendrick applauded his driver for eventually coming forward and asking for help.

“I think that’s one thing everybody admires about Dale: how honest and up front he is,” Hendrick said. “He cares a lot about the team, his fans and the sport in general. But when he knew that there was something not right, he went to see Dr. Petty, and I admire him for that.

“… A lot of guys would try to play hurt. But when the doctor tells you if you get hit again like that right away, it could be catastrophic, you need to listen. So, I think this deal has worked out extremely well — as well as it could.”

By sitting out this Saturday night’s race at Charlotte, Earnhardt’s streak of 461 consecutive starts, which is the fifth-longest active streak in the Cup Series, will come to an end. The governing body of NASCAR strengthened its commitment to keeping drivers with concussions off the track in 2002, in part because Earnhardt admitted he was unable to fully concentrate or communicate with his crew chief after an accident at California.

Earnhardt confirmed Thursday that he self-diagnosed himself with a concussion then, but at the time he did not reveal it until several weeks later. Officials from NASCAR then said doctors at infield care centers could require drivers to undergo CT scans or MRIs if they suspected a concussion.

Clearance to race after suffering a concussion is not given until after a driver obtains a medical release, which Earnhardt, Hendrick and Steve O’Donnell, NASCAR’s vice president of racing operations, all confirmed on Thursday would be left up to Dr. Petty in Earnhardt’s case.

Nationwide Series driver Eric McClure missed six weeks earlier this season because of lingering effects of a concussion suffered during another race at Talladega. McClure said the concussion he sustained in the May 5 race was the third of his career, one of the main reasons his doctors and NASCAR officials made him sit out for an extended period of time.

O’Donnell said Thursday that NASCAR will continue to evaluate how it monitors possible concussions suffered by its drivers. But he said some of that evaluation will always have to be left up to the drivers themselves.

“It will probably help to go back to Kansas and [see] what happened,” O’Donnell said. “He was seen by an ambulance, proper safety measures were in place, he was cleared. I talked to [Kansas Speedway president] Pat Warren at the track. He had conversations with Junior, post-incident, and everything seemed fine.

“So, that’s where I would say the process of an evaluation [has to also come from] any athlete or driver, it’s not just NASCAR making the call. It has to be the driver, as well, letting us know how he’s feeling. Part of that we can always evaluate, as we will. We’ll look at Kansas and see what we may be able to do better. We’ll do that with safety each and every incident. … But I think we’ve got to also rely on the drivers to be up front with us and let us know how they’re feeling. I think you saw him do that here.”

Earnhardt said he plans to take time away from the track now “to let my brain rest” and that he hopes to be cleared by Petty in time to drive in the Oct. 28 race at Martinsville Speedway. But he made it clear that it will be left up to Petty.

“We ran through a couple tests and everything was checking out. We did an MRI, everything looked good there. But I was really honest with him about how I felt, and I was honest about the whole process from Kansas all the way on,” Earnhardt said. “He took it all into account and couldn’t clear me to race this weekend. I trust his opinion — that’s why I went to see him.

“He’s been a good friend of mine for a long time and has helped me through a lot of injuries before. So, I believe when he tells me I need to take a couple weeks off and not be in the car — then that’s what I need to do.”

Dr. Petty said he was hopeful he would be able to clear Earnhardt sooner rather than later.

“I couldn’t give you a better history than he did,” Petty said. “He had no amnesia on either side of either of the incidents, which is very important. … What we’ll do now is we want him to have four or five days after he has no headache, and then we’ll give him some sort of test, like to get his pulse rate up — see if we can provoke a headache. And then, if we can’t, we’ll let him go out and drive a lap or two and see how that goes, and if that goes well, we’ll probably clear him to race.”

Hendrick said he is willing to wait until everyone is certain Earnhardt is completely healthy.

“We were so happy [Wednesday] that the MRI was completely normal, no damage, that we don’t have a problem there,” Hendrick said. “And for these two guys [Earnhardt and Letarte] to have the kind of year they’ve had, to lead the points and get in the Chase, we’ve got a lot of years left to race. I always want to be on the side of safety, and I applaud Dale for raising his hand and going in there and getting checked out.”