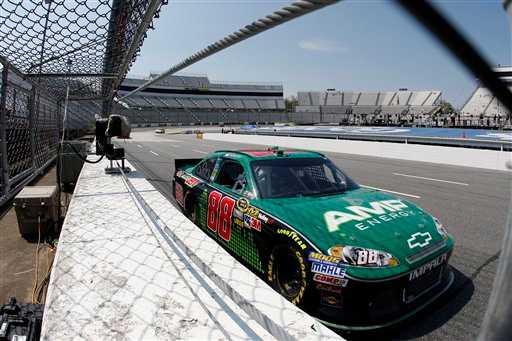 Dale Earnhardt Jr. has been cleared to drive this weekend at Martinsville Speedway, according to a statement issued Tuesday afternoon by NASCAR officials.

Earnhardt sat out the past two races while recovering from a concussion he suffered in a last-lap crash at Talladega Superspeedway. On Monday, he climbed into a car at Georgia’s Gresham Motorsports Park for a closed test session attended by neurosurgeon Dr. Jerry Petty and ran 123 laps without incident. The two then met Tuesday morning in Dr. Petty’s Charlotte office for a follow-up evaluation.

“Dale Jr. has done everything asked of him,” Dr. Petty said in a statement released by Hendrick Motorsports. “He hasn’t had a headache since Oct. 12, and we have not been able to provoke any symptoms since that time. I have informed NASCAR and Hendrick Motorsports that he is medically cleared for all NASCAR-related activity.”

On Sunday, team owner Rick Hendrick said Earnhardt would be entered for Martinsville if Dr. Petty thought the driver of the No. 88 Chevrolet had healed sufficiently to be cleared to race.

“I will be shocked if he’s not in the car,” Hendrick said during the Kansas race. “Everything looks good — his attitude and the way he feels. He’s had no headaches since the Thursday and Friday of Charlotte, and the tests have gone real well. I think Dr. Petty is just being cautious, and I applaud him for that.”

Earnhardt went to see Dr. Petty shortly after he began experiencing dizziness and headaches resulting from the Talladega accident. That, coupled with a serious hit during Kansas tire testing in August that resulted in another concussion, gave Dr. Petty reason to advise Earnhardt to step out of the car until he recovered.

During his time away from the car, Earnhardt went to Pittsburgh to meet with Dr. Micky Collins, director of the University of Pittsburgh Medical Center Sports Medicine Concussion Program. Earnhardt also remained actively involved in the team, as replacement driver Regan Smith finished 38th at Charlotte after experiencing an engine failure, then rallied from 39th to seventh at Kansas.

Earnhardt snapped a four-year winless streak with a victory at Michigan earlier this season, and his 18 top-10 finishes in 2012 represent the most he’s had since 2004. He made the Chase for the second consecutive season.