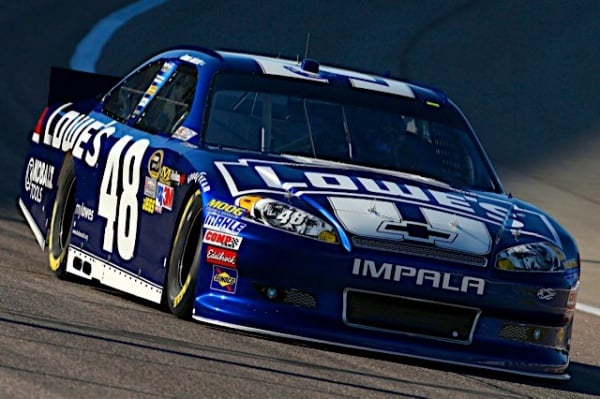 The driver of the No. 48 Lowe’s Chevrolet started from the pole position and was in contention as the field reset for a green-white-checkered flag run at the 1.5-mile oval. Johnson lined up from the outside and ran away with the victory, his second straight in the Chase for the NASCAR Sprint Cup and the 700th for manufacturer Chevrolet.

Hendrick Motorsports has recorded the last several milestone victories for Chevy, including the 400th, 500th and 600th wins. Click here to see more from the organization’s storied history.

Kasey Kahne, No. 5 Great Clips/Hendrickcars.com Chevrolet
Race finish: 25th.
Chase standings: Fourth.
Race recap: Kasey Kahne rolled off the grid 13th in Sunday’s NASCAR Sprint Cup event at Texas Motor Speedway with the words from team owner Rick Hendrick ringing in his ears, “This is your kind of track,” Hendrick told Kahne. “Let’s get ‘er done.” The driver of the No. 5 Great Clips/Hendrickcars.com Chevrolet obliged and jumped to 10th in the opening laps, reporting the car was handling a tick loose. Handling was a continual issue for the field as the 1.5-mile Texas track conditions changed under the moving sun. Crew chief Kenny Francis addressed the often loose-handling issue, while Kahne tried to navigate the track despite the glare the sun created midrace. Kahne, who won previously this year at 1.5-mile Charlotte (N.C.) Motor Speedway, held steady in the top 10 throughout the race. On the Lap 280 restart, the right-front tire on Kahne’s Chevrolet rubbed and smoked slightly as he was avoiding traffic. Kahne, who had restarted 14th, maintained his position inside the top 10 despite this slight issue. Kahne was running 10th when another tire issue occurred with 14 laps to go. Kahne made some contact with teammate Jeff Gordon, sustaining some sheet metal damage and a flat right-rear tire. Kahne reported to pit road for fresh tires and finished the race 25th.

Jeff Gordon, No. 24 Drive to End Hunger Chevrolet
Race finish: 14th.
Chase standing: Sixth.
Race recap: Jeff Gordon opened Sunday’s race from 16th in his No. 24 Drive to End Hunger Chevrolet. By Lap 20, Gordon was finding success running a slightly higher line, and he had improved to 13th. Forty-eight laps later, Gordon cracked the top 10, with spotter Eddie D’Hondt telling the driver of the No. 24 Chevy, “Good work. The No. 20 ahead is P8.” Gordon continued to run lap times similar to the leaders and ran as high as second as the race unfolded. But a sluggish tire late in the race prompted Gordon to make an unscheduled pit stop. The No. 24 team discovered the tire was in fact going down and replaced it, sending Gordon back onto the track a lap down. A timely caution several laps later gave Gordon the opportunity to return to the lead lap on Lap 275. Gordon lined up inside the top 30 for the Lap 280 restart and improved to 20th with 30 laps to go. The driver of the No. 24 Chevy skipped a late-race pit stop to improve further on the field and run 13th with 15 laps left. But after late-race contact with Kahne, Gordon decided to hit pit road during a yellow-flag period one lap later. The No. 24 team replaced Gordon’s tires and repaired the sheet metal, sending Gordon back onto the track where he finished 14th.

Jimmie Johnson, No. 48 Lowe’s Chevrolet
Race finish: First.
Chase standings: First.
Race recap: Jimmie Johnson earned the pole position for Sunday’s NASCAR Sprint Cup Series event, his first at the 1.5-mile Texas Motor Speedway. After lining up from the top spot, the driver of the No. 48 Lowe’s Chevrolet never fell from the top five. He led the first 48 laps until he made his green-flag pit stop and returned to pace the field after his scheduled stop. Johnson led the next 51 circuits, when the caution flag was waved on Lap 101 for debris. After this caution period, Johnson rotated inside the top three for the middle part of the race as his No. 48 team continually addressed the handling of the Lowe’s Chevrolet. Johnson hit pit road during the Lap 275 caution period for four fresh tires and more fuel. The No. 48 team sent him back out in second, whereupon Knaus told Johnson he would be four laps short on fuel if the race finished under green-flag conditions. When the green flag waved for the Lap 280 restart, Johnson slipped into second and began to save fuel. With 26 laps to go, Knaus asked Johnson to save more fuel. “We were going faster when you were saving,” Knaus told Johnson over the radio. Johnson made a pit stop on Lap 311 during a late-race caution period and left with four tires, fuel and in second for the restart.  With 19 laps left, Johnson lined up third for the restart and battled Brad Keselowski, the leader, when the green flag waved. The duo fought for the lead for several laps before the caution flag was waved again, resetting the field. Johnson lined up second on the outside for the first attempt at the green-white-checkered flag restart. When the green flag waved, Johnson cleared Keselowski without a problem and ran away with his second straight Cup win.

Dale Earnhardt Jr., driver of the No. 88 National Guard/Diet Mountain Dew Chevrolet
Race finish: Seventh.
Chase standings: 12th.
Race recap: Dale Earnhardt Jr. started 19th in Sunday’s NASCAR Sprint Cup event at Texas Motor Speedway and improved to 13th by Lap 6, despite reporting a tight-handling condition. Earnhardt kept trying lines on the 1.5-mile racetrack, and ultimately found speed on the bottom line early in the race. Crew chief Steve Letarte worked with Earnhardt to finetune the handling of the No. 88 National Guard/Diet Mountain Dew Chevrolet, and after the first pit stop, Earnhardt was turning much faster lap times. Letarte also employed pit strategy, as Earnhardt picked up five spots during a green-flag stop mid-race. The No. 88 team continued to pick up spots on the track and on pit road, and Earnhardt was running fifth with 30 laps to go. Earnhardt lined up fourth for the green-white-checkered flag restart, behind teammate Jimmie Johnson and finished seventh.