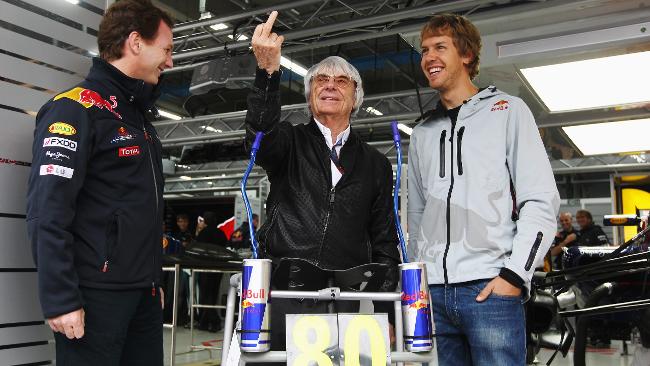 Jan.3 (GMM) Bernie Ecclestone has admitted he would be happy if Red Bull’s recent domination ends in 2013.

With his friend Sebastian Vettel at the wheel, the energy drink-owned team has secured every drivers’ and constructors’ title for the past three seasons.

“It wouldn’t be too bad a thing if we were to have a change at the top of the sport, perhaps with Ferrari leading the way again,” the F1 chief executive told Italian newspaper Corriere della Sera.

As for his relationship with Ferrari president Luca di Montezemolo, which after a recent spat appeared irreparably damaged, Ecclestone insisted: “Montezemolo is still a friend and I’m convinced that he didn’t really intend to say the things he said about me.

Ecclestone denies he has made a strategic decision to side politically with Red Bull over Ferrari.

“All I said was that they (Red Bull) deserved to win the titles again and that I didn’t agree with the stance Ferrari were taking with the appeal against the alleged rule infringement by Vettel at Interlagos,” he said.

As for Red Bull, “They have done a lot for the reputation of our sport,” Ecclestone insisted.

Meanwhile, Ecclestone admitted recently that, if he is charged by German prosecutors over the Gribkowsky bribery affair, he could be forced to step down.

But he now insists: “I would be (worried) if I was guilty!

“Are they trying to entrap me? I don’t know and I don’t care. All I know is that people try anything when money is involved.”

Ecclestone denied he fears formula one would fall apart if he is no longer in charge.

“I have said that formula one would have been different without me. I don’t think it would be better,” he said.

“Is there a new Ecclestone on the horizon? No, I don’t see one,” added the 82-year-old Briton.

He concluded by saying that his ‘dream team’ in F1 would feature Vettel and Lewis Hamilton as teammates.