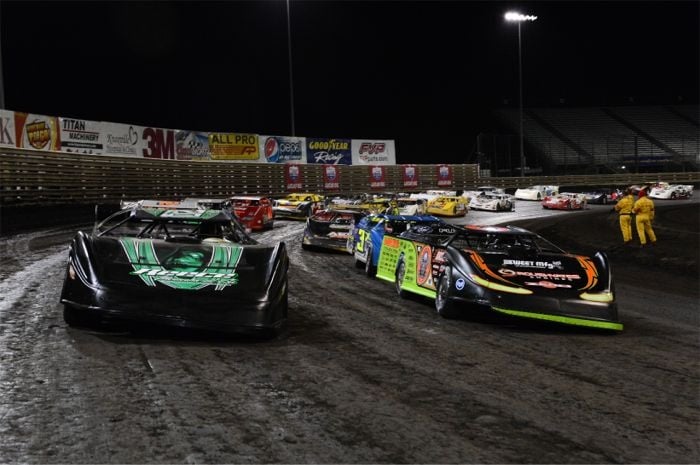 WAYCROSS, GA (February 8, 2013) – Officials of the Lucas Oil Late Model Dirt Series are pleased to announce that the series will offer racers over 3.3 million dollars in cash and contingencies awards in 2013. The amount is a new record for the Lucas Oil Late Model Dirt Series exceeding last years record. Since its inception in 2005, the series maintains its place as the premier national touring dirt late model series in the country. The 2013 schedule includes a series record 47 events in 21 different states at some of the top racing facilities in the country.

“The Lucas Oil Late Model Dirt Series is proud of the continued growth we’ve experienced each year. We are very thankful to have so many great track promoters that believe in our program and continue to support us each year. We’ve added a few new venues and increased the number of races from last year. Lucas Oil is committed to bringing the premier national touring series for dirt late models into even more homes with a great TV Package again in 2013. Our fans, race teams, track promoters, and marketing partners will be the ones to benefit as we continue to grow”, stated Ritchie Lewis, Director, Lucas Oil Late Model Dirt Series.

The Lucas Oil Late Model Dirt Series will kick off the season at the famed “Clay by the Bay” for the 9th consecutive year with over $200,000 in purse monies paid out for the week. The 37th Annual DART Winternationals will begin Sunday night with an open practice session. Racing action begins on Monday Feb 11th with the series running a full show, paying $5,000 to win, on both Monday and Tuesday nights. Then on Wednesday and Thursday nights, drivers will compete for $7,000 to win. The final two nights, Friday and Saturday, will pay $10,000 to win respectively. The final two events on Friday and Saturday will be the first two points earning events of the 2013 season.

The DART Machinery bonus money will be for grabs to racers that compete all six nights at East Bay Raceway Park. The driver that earns the most points over the six nights of racing will be crowned the DART Winternationals Champion and receive the $5,000 bonus monies. Racers will get two additional chances to make the feature event each night through the PRC Strawberry Dash and the DirtonDirt.com Fast Time Provisional. These drivers will start 25th and 26th each of the six nights feature events. East Bay Raceway Park officials have also added two non-qualifier races for Friday and Saturday nights events paying $1,000 to win and $100 to start for racers failing to make the feature on those nights.

The Fairfield Inn & Suites Tampa Brandon and Courtyard by Marriott Tampa Brandon are the Official “Host Hotels” of the Lucas Oil Late Model Dirt Series for the 37th Annual DART Winternationals. These hotels are offering special rates to anyone attending the Winternationals. For anyone looking to make a reservation, ask for the “East Bay Raceway” rate by calling the Fairfield Inn & Suites at 813-661-9719 or the Courtyard by Marriott Tampa Brandon at 813-661-9559. To make a reservation at either of these hotels online, simply click http://cwp.marriott.com/tpabr/eastbayraceway and then click on the name of the hotel to complete the booking process. Both hotels are located just a few minutes from the track, on Palm River Road and are 1 block from many dining and shopping options.

Race fans can purchase tickets online for any of the 6 full nights of racing, simply click the following link:http://pivotalracing.com/events/luca…rnationals.For those looking to pre-purchase special reserved seating, just call East Bay Raceway Park at 1-877-457-5611.

Race fans that cannot attend this years DART Winternationals can see all the action live online by visitingwww.eastbayracewaypark.com and register for the pay per view broadcast and watch each nights racing action live.

For the latest breaking news on the Lucas Oil Late Model Dirt Series, log onto www.lucasdirt.com .
Follow the series on the social media outlets at www.facebook.com/lucasdirt andwww.twtitter.com/#!/lucasdirt.

To learn more about Lucas Oil Products visit their website at www.lucasoil.com .

NEXT POST
DIRT SPRINT CAR: World Of Outlaws By the Numbers