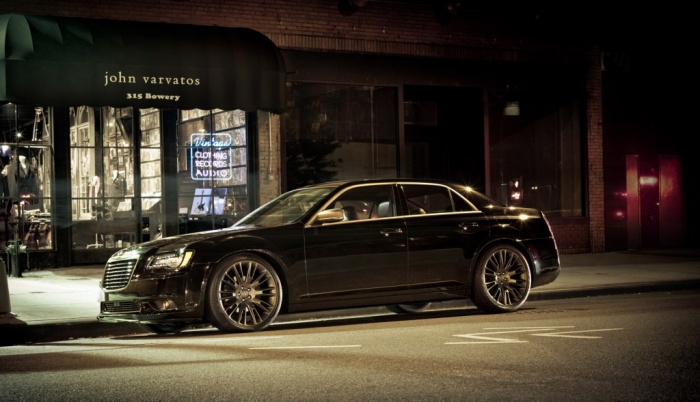 Check out this article as well as photos of the John Varvatos Chrysler 300. Tamara Warren spoke with fashion designer Varvatos for Forbes magazine a few months back, here is that interview. More photos at the bottom of the story.

TW: What was the process like for designing the car?

JV: Coming to Detroit to visit Chrysler for me, I first expected to see guys with penholders. I expected a whole different thing. I showed up and they’ve got black motorcycle jackets and the design team is cooler looking than my design team and they’re all fashion and they’re into all the things in life that influence you. Car people or electronic people now want the cultural influences from all over. Working on the car for me was a fun process. It wasn’t like church and state. They love fashion; I love cars. We were trying to figure out a way to connect the two even closer.  Architecture and cars are the thing that inspire me. I don’t look at other clothes to get inspired. It’s the line on the cars, the details, the shapes, the fit and finish,  the gauges. All those things to me have always been influential. Also I’m a guy, I’m a masculine guy who likes power in terms of engine and the sound of it. When I think about those Dodge Chargers and what those cars sound like rumbling there. There’s something very sexy about that.

TW: Teaming up with Chrysler, how did that come together?

SC: We want to be where we’re from. We didn’t want to pretend to be luxury or Euro. We  want to  have the quality of an import with prices that afford people who work hard. From there we developed the “Imported from Detroit” campaign with Eminem and the Super Bowl and that sparked linking ourselves to everything that Detroit exported in its past and modern days. John is someone who made it from the blue-collar world into the white-collar world with a blue-collar attitude. It’s kind of an American imposing yet sophisticated way of fashion execution.  We used him for an example of who we are as a brand before we even developed this car. We wanted to launch these kinds of links with a car that fits that bill. It’s quieter than a Lexus and has an 8 speed transmission found only on a Rolls-Royce and BMW, and best in class fuel economy.  This is a car that is the most accessorized vehicle in history that you can mold it. It’s an American thing: I want to have my own individual presence. When you look at the fashion line John has, he has that kind of sophisticated and rugged way that has that Detroit grit in it.

JV: I got to know about Chrysler and they got to know about me.  We did the car for the New York Auto Show. I was impressed not only with the way they looked, but the way they thought. With all the raw material we were using, they said it’s one thing to do for the auto show it doesn’t have to  have a warranty or be tested, but don’t expect that we can produce it. But when he and his boss saw it, they said we’re making and we’re not changing it.

TW: Can you walk me through the car?

JV: We’re not a brand that’s about logos. We scaled down the Chrysler with black and steel finishes. It’s custom wheels, custom trim, and the same finish that’s on all of our hardware. It’s a little lower, 20-inch wheels. It feels a little more stealth-like.  The whole fascia is unique to this car. The  lighting is blacked out. It has a blackened grille, because the grille has always been glitzy.  The gauges are based on the watch face that we do. It has metallic leather seats with hand stitching.

SC: This is completely different gauge, clock and hands are different has these gaps in the middle.

JV: It has this grey wood finish, down to the floor mats where we did hand stitching and leather on it and the fit and finish on the doors. It has a mineral gray effect on the seating. We went more for people who did apparel. The softness is amazing and the stitch work. This is like sitting in a plush couch.

SC: It’s going to be top of the line.
JV: I was in Detroit a number of times and they sent a number of things. A whole seat would be sent in the mail. In the end I feel like it was a fun process for their team. At certain point I’m sure it was a pain in the ass. They delivered this car a month ago in front of my Bowery store. It came out of the semi truck down the ramp. When they opened up the truck, my hairs were standing off my arm and I had goose bumps. As much as I know the car, I felt like, hey we really made an impact on this car. There’s something special here.

50 Cent ‘My Life’ Video
50 Cent didn’t bring out one of his multi-hundred-thousand-dollar toys for new new “My Life” video. He was paid an estimated $300,000 just to drive a Chrysler; a 2013 300C John Varvatos Special Edition, to be exact. The car was created with John Varvatos, a designer from Detroit, with the goal of capturing the sense of the Motor City. Is it a coincidence that Eminem is also in this video, after starring in a Chrysler Super Bowl commercial? We think not.