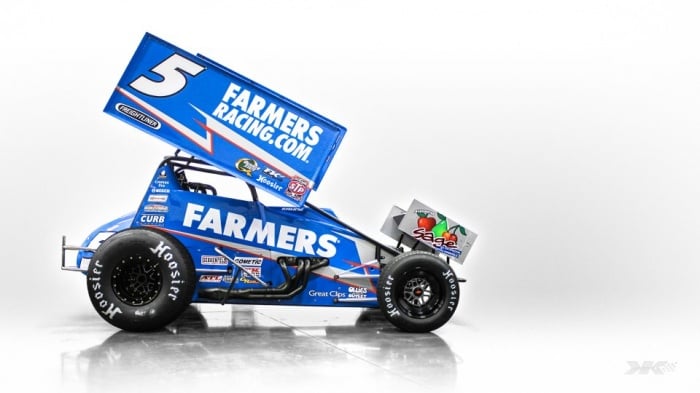 FIRST LOOK! Whether it be concrete, asphalt or dirt, Kasey Kahne Racing has a Plan to Perform! We’re very excited to introduce to you the 2013 Farmers Insurance Sprint Car!

Check out the video below of Kasey Kahne Racing crew assembling the No. 5 car in just a day and a half!

Kasey Kahne, founder and driver for Kasey Kahne Racing, enters his second year with Hendrick Motorsports following a career-best fourth-place result in the 2012 NASCAR Sprint Cup standings. Joined again by crew chief Kenny Francis, Kahne will pilot the No. 5 Chevrolets during the 2013 campaign, his 10th year on the Cup circuit.

Growing up in Enumclaw, Wash., Kahne earned a Northwest Mini-Sprints championship and Hannigan Speedway title at age 17. Shortly thereafter, Kahne left his home state for the short tracks of the Midwest, sharpening his driving skills in the World of Outlaws, Circuit of Champions, Gumout Racing Series and Northern Sprint Tour.

Kahne went on to win the 2000 USAC National Midget Series championship and was named Driver of the Year that season. In 2001, he matched current Hendrick Motorsports teammate and former sprint car star Jeff Gordon after claiming his second consecutive victory in the prestigious Night Before the 500 at Lucas Oil Raceway at Indianapolis. Like Gordon and other standout open-wheel drivers, Kahne was soon on his way to NASCAR.

He ran a partial NASCAR Busch Series schedule in 2002 with Yates Racing before teaming up with owner Brad Akins to run a full season the next year. During that 2003 run, Kahne earned a win, four top-five finishes, 14 top-10s and one pole position and caught the attention of team owner Ray Evernham. The former championship-winning crew chief believed Kahne’s dirt track racing background would pay off in the more powerful Sprint Cup cars and offered him a ride for the 2004 season. Kahne’s impact was immediate, and the rookie took home top-three finishes in three of his first four races. After claiming 2004 Sprint Cup Rookie of the Year honors, Kahne emerged as a championship contender in just his third full Cup season. He won a series-high six races and recorded a career-best six pole positions before finishing eighth in the Chase for the NASCAR Sprint Cup in 2006.

Kahne renewed his charge for the championship in 2009, when he qualified fifth for the Chase. He earned two top-five finishes and four top-10s during the 10-race playoff and concluded the season 10th in the final standings.

The following spring, Kahne made a promising move for his future when he signed with Hendrick Motorsports to drive the No. 5 Sprint Cup Chevrolets in 2012. At the time, Kahne said he thought it would give him a great chance to win races and compete for championships, and once he strapped into Hendrick Motorsports’ original Cup entry, he was doing just that.

Kahne notched a career-best fourth-place in the championship standings in 2012 — his first season with Hendrick Motorsports — on the strength of two wins, four pole positions, 12 top-five finishes and 19 top-10s. Kahne recorded his career-best average starting and finishing positions and notably led the Cup field with an 8.8 average starting spot. Kahne’s four poles were ranked tied for first among Cup drivers, while his 19 top-10 results matched 2006 as a personal best for him.

Off the track, Kahne fuses his racing interests with his entrepreneurial passion and runs Kasey Kahne Racing. The Mooresville, N.C.-based company was formed in 2005 and employs more than 20 people dedicated to sprint car racing. KKR fields entries in the World of Outlaws sprint car series for Daryn Pittman, Cody Darrah and Brad Sweet. The team collected seven World of Outlaws wins in 2012.

Kahne also focuses on philanthropy through the Kasey Kahne Foundation – an organization that gives back to chronically ill children and their families, as well as disadvantaged youths. The Foundation raises funds through events ranging from concerts to sprint car races to foot races – notably the Five Kahne, an annual 5K charity run held in uptown Charlotte, N.C.