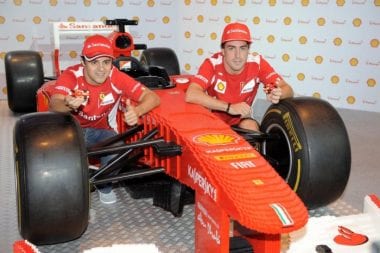 Shell and Ferrari have teamed up with the LEGO® Group to bring you the Ferrari Model LEGO F1 Collection. Modelled on six iconic Ferrari vehicles, you can build your own collection of exclusive LEGO F1 models when you fill up with Shell V-Power. Get down to your nearest Shell service station and start building today.

On the Thursday of the first Grand Prix of the year in Melbourne, Fernando Alonso and Felipe Massa unveiled the first full scale model of a Ferrari Formula 1 car made out of LEGO bricks. The event was part of a new promotion run by Shell in Australia, in collaboration with Ferrari and the LEGO Group.

As from 18 March, customers at Shell petrol stations will be able to get their hands on a limited edition model of some of the most evocative cars in the history of Ferrari. These will include the short wheelbase 250 GT Berlinetta, the F40, the FXX and the 458 Italia. To launch the promotion, a team of experts built up a 1:1 scale model of the Ferrari 150 ° Italia, the car with which the Maranello Scuderia competed in the 2011 Formula 1 World Championship. It took several months to design the model, which features real Pirelli race tyres, a seat big enough to accommodate a driver and an exact replica of the steering wheel, also made entirely from Lego bricks.

The Lego F1 car is part of a promotion between Ferrari and Shell that’s been going on for some time. In some places of the world (not the US, though), if you stop at a Shell station and refuel, you can purchase these special mini Ferrari Lego kits that feature six of the Italian brand’s greatest creations: the F40, 458 Italia, FXX, 250 GT Berlinetta, the Scuderia Ferrari Truck and even a pint-sized version of this F150 Italia. Or you could just buy the full set on eBay, which features a mark up in price worthy of the Ferrari name.