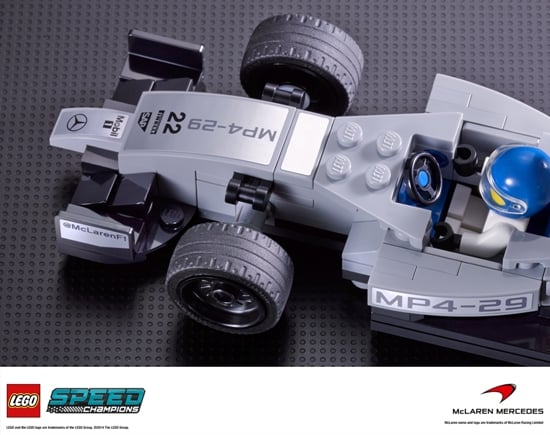 Seven different LEGO sets will be available from spring 2015, ensuring lots of racing action and squealing tyres in the children’s room. A large red Ferrari truck drives up – together with the Ferrari F14 T Racing car. What’s more, a McLaren Mercedes pit stop set will also be available, featuring the McLaren LEGO Mercedes MP4-29 as well as the home stretch with lights function and two Porsche cars – the 911 RSR and 911 GT3 R Hybrid. Also four sets of stand-alone vehicles wait to hit the track. Whether it is a racing car or road car – the new brick built car models will get the hearts of five- to eleven-year old as well as grown up engine fans beating faster.

In addition to typical LEGO building fun, the LEGO Speed Champions series of vehicles is particularly amazing thanks to its many authentic details: the LEGO minifigures are wearing racing car overalls, there is a winner’s cup, flags and detailed tools – inspired by their big role models Ferrari, McLaren and Porsche whether you are a passionate builder or a keen car fan, there is an exciting offer. Now just one question remains: Who will be the Speed Champion in 2015?

Whether it’s a cherished memory from childhood, or a moment in adulthood when you’ve shared a building experience with your kids, everybody, surely, has played with LEGO.

It’s one of childhood’s greatest gifts – playing with those interlocking little plastic bricks, created by the famous Danish brand more than 60 years ago, is only limited by a child’s imagination, which means that, unlike most other toys, it never gets old or tired.

Over the years, LEGO’s collectible sets have slowly grown – now, for the first time ever, you’ll be able to construct and play with a genuine LEGO McLaren Formula 1 car – 2014’s MP4-29. Which, of course, you’ll eventually drop, losing crucial components down the back of the sofa…

The MP4-29 McLaren LEGO model forms part of the Danish brand’s Speed Champions range, which launches in March 2015. So if you feel like you missed your true vocation as an engineer, or you simply want to set your kids on the path to becoming grand prix mechanics, the Speed Champions range is the best place to start.

Besides, who are we to argue? As the characters in The LEGO Movie famously attested: Everything is awesome, Everything is cool when you’re part of a team…

And we think they’re absolutely right…

About The LEGO Group
The LEGO Group is a privately held, family-owned company based in Billund, Denmark. Founded in 1932, it is one of the world’s leading manufacturers of play materials for children, employing approximately 13,000 people globally. The company is committed to the development of children’s creative and imaginative abilities, and its employees are guided by the motto adopted by founder Ole Kirk Christiansen: “Only the best is good enough.”  LEGO products are sold worldwide and can be virtually explored at www.LEGO.com.