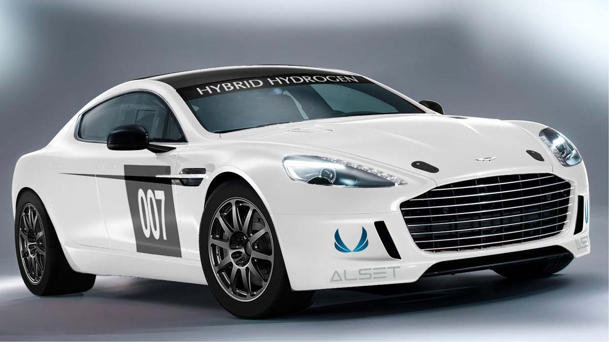 In today’s world, even the most wildly brutal production cars are adopting some form of electricity to assist in propelling itself to unfathomable speeds while improving efficiency; the McLaren P1,Porsche 918 and LaFerrari hypercars all ventured hybrid. In the world of high-performance race cars, the same rules apply; Toyota and Audi – the heavyweights in prototype Le Mans racing – have been hybrid for a few seasons now. The desire for automakers to prove that green doesn’t mean slow, as well as showcasing its environmental message, remains clear, and Aston Martin is following suit by announcing its hydrogen powered Rapide S race car, set to debut at this year’s Nürburgring 24-hour race.

Aston Martin’s Rapide S based race car will be the “first hydrogen powered car to compete in an international event.” They also plan to be the “first zero CO2 emission sports car to complete a race pace lap” at the legendary German circuit.

The brand partnered with hydrogen gurus for the Rapide S, Alset Global, in developing a twin-tubro 6.0-liter V-12 motor that can run as a standard gasoline engine, a pure gaseous hydrogen engine, or a combination of both. Aston Martin will run in pure hydrogen mode to set the zero CO2 emission lap, but no word on whether the car will revert to “standard” gasoline mode for the remainder of the race. If it did, the performance aspect of the technology would be negated, making the Rapide S a straight PR gimmick. The hefty weight penalty in storing the four hydrogen tanks – two next to the driver and two in the trunk – and using them for just one lap seems a giant compromise in handling proficiency. It remains possible, however, that blending the two power options might squeak out additional laps per stint, therefore stopping less for fuel. Running this way might make sense if performance remains similar.

Regardless, the ability to exude only water from a burly race car’s gaping exhaust remains positively intriguing. Hopefully the Rapide S does it for more than one lap.