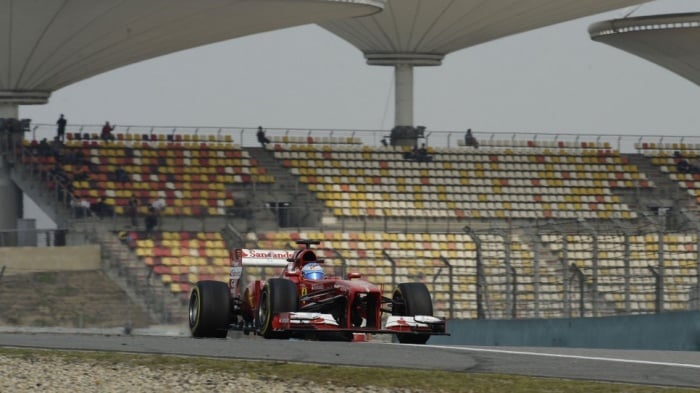 Shanghai, 14 April – Fernando Alonso delivered Scuderia Ferrari’s first win of the season in the 2013 Chinese Grand Prix this afternoon, in a race that was action packed, mainly down to the different strategies employed in managing the tyres. After a strong start, Felipe Massa had to settle for sixth at the flag but the eight points he added to the winner’s 25 means the Prancing Horse has moved ahead of Lotus to go second in the Constructors’ championship, just five points behind the leaders Red Bull.

As the lights went out on the 2013 Chinese Grand Prix both Ferrari men got great starts with Fernando moving up one place to second and Felipe up to third, helped by a slow start from Raikkonen who thus slipped from second on the grid to fourth, while Hamilton maintained his lead from pole. Felipe was right on his team-mate’s tail and by lap 4, the two of them were hassling the leading Mercedes. At the start of lap 5, Fernando slipstreamed Hamilton to get by and Felipe, determined not to be left behind dived down the inside of the Englishman to be second: a long way to go, but it was now a Ferrari one-two. Hamilton and Rosberg both pitted on lap 6. Guttierez ran into the back of Sutil on the back straight, with the Mexican retiring on track and the German in the pits.

Fernando and Raikkonen pitted for Prime tyres on lap 6, which left Fernando and Hamilton to battle for eleventh. Felipe pitted on lap 7, as did Maldonaldo in the Williams. This slightly later stop for Felipe saw him drop down the order more than expected. The lead trio was now Hulkenberg, Vettel and Button, the same three drivers who opted not to set a time in Saturday’s Q3 so as to start on the Medium Pirelli. Throughout the race, there would be “false” leaders as the pit stops ran out of synch between the top 7 on the grid who started on the Soft and the rest of the field who had gone for the Medium. Lap 9 and it was Felipe fighting Webber for eleventh, as Fernando now found himself back in sixth ahead of Hamilton and Vergne in the Toro Rosso.

On lap 10, Massa got past Bottas in the Williams to go tenth. One lap later the order was Hulkenberg, Vettel, Button, Perez and Di Resta fifth, all on the Medium all yet to pit. Fernando was the first of those who had made the switch from the Soft to Medium and then came Hamilton seventh, followed by Raikkonen, Vergne, the Frenchman yet to stop, with Felipe 10th ahead of Webber who had started his Red Bull from the pits.

Lap 13 and Fernando was in fifth, menacing fourth placed Perez in the McLaren and the Ferrari got past as they crossed the line to start the next lap. Lap 14 and the two leaders, Vettel and Hulkenberg pitted, as did Di Resta. On the same lap, Webber collided with Vergne and the two men had to pit, the Australian for a nose and the Frenchman for a puncture. While this had been going on, Fernando was now second behind Button and Felipe was sixth in between Perez and Vettel.

Lap 17 and Webber was out having lost a wheel off his Red Bull. Fernando was 0.6 behind Button but the Englishman seemed to be controlling the gap, as he continued to run on his first set of Medium tyres. On lap 19, Vettel managed to pass Felipe, who immediately pitted for a fresh set of Mediums. On lap 20, another spurt from the Spanish Ferrari man saw him again close right up to Button, while behind them was another exciting battle as Raikkonen harried third placed Hamilton.

On lap 21, Fernando was leading the 2013 Chinese Grand Prix once more having swept past Button and he immediately pulled out a lead of 1.5 seconds. Hamilton and Raikkonen came into the pit lane together and left in the same order. Last year’s China winner, Rosberg, retired his Mercedes in the pits on lap 22 and Felipe was eleventh after his visit to pit lane, behind Raikkonen and ahead of Maldonaldo. One lap later, Fernando made a second tyre change, followed into pit lane by Button making his first tyre switch. The Spaniard came out third ahead of Perez, again leaving Vettel and Hulkenberg, out of synch on tyre changes, in the top two places, as Felipe chased Di Resta’s Force India for seventh spot. Fernando was flying and dispensed with Hulkenberg’s Sauber to go second on lap 26, 3.8 behind Vettel. The gap came down to 2.1 on the next lap, as the Ferrari man set a fastest race lap. The red car continued to close on the purple one, with a one second gap on lap 28 and next time round Alonso swept into the lead once again.

Felipe moved up to seventh when Hulkenberg pitted and found he now had Vettel behind him as the German had just pitted. With fresh rubber, the Red Bull was able to pass the F138 with a robust move. Out in front of the 2013 Chinese Grand Prix , Fernando had more than 11 seconds in hand over Hamilton, who had Raikkonen and Button behind him, with Vettel now fifth ahead of Hulkenberg and Felipe seventh, which became sixth when Raikkonen pitted the Lotus. The threat from Vettel was ever present as he passed Button to go third on lap 36, the same lap that Felipe and Hulkenberg came in to change tyres, leaving pit lane side by side with the Ferrari just getting its nose ahead as they rejoined the track. Hamilton made his third stop on lap 37, so that Vettel was now second, around 19 seconds behind Fernando. However, they still both had to visit the pits one more time, the Ferrari on lap 41, the Red Bull ten laps later, so that the order between them would switch twice more, before leaving Fernando to manage the race to the flag. When Vettel made his final stop, with just 5 laps remaining, it dropped him down the order, so that Kimi Raikkonen in the Lotus came home second with Lewis Hamilton completing the podium for Mercedes. Vettel and Button filled the next two slots, ahead of sixth placed Felipe.

The 2013 Chinese Grand Prix result means that the F1 circus heads to Bahrain for next Sunday’s fourth round of the championship, with Alonso third in the Drivers’ classification, 6 points behind second placed Raikkonen and 9 behind the leader Vettel. Hamilton is fourth, followed 10 points down by Massa.

NEXT POST
F1: Mark Webber Set To Reach 200th Start – Take A Look Back At His Career