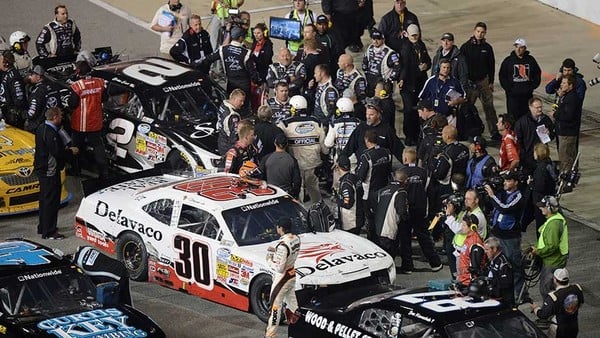 The Nelson Piquet kick has been seen before, this time it was in action on Brian Scott at Richmond International Raceway, a short track where tempers are designed to flare. Back in 1982 ,during a F1 race, the Nelson Piquet kick was also in action, by the current NASCAR drivers father, as he kicked and punched Eliseo Salazar. You can watch both videos below.

Two Richard Childress Racing crew members were charged and released early Saturday morning by the Henrico County (Va.) Police after a post-race altercation on the grounds of Richmond International Raceway.

Michael A. Scearce, 50, a mechanic with the RCR No. 2 Chevrolet team for NASCAR Nationwide Seriesdriver Brian Scott, was charged with two misdemeanor counts of assault, according to police. Police also said Thomas Costello, 35, an interior specialist for the team, was charged with one misdemeanor assault count.

“I didn’t witness what took place last night outside of the race track,” team owner Richard Childress said. “Our team members were walking to their cars and words were exchanged with members from another team, which led to an altercation. I am still learning all the exact details and, because it did happen outside of the track, local authorities became involved. We are working with them to resolve this matter. We are now concentrating on winning the Sprint Cup race tonight.”

A court date for Scearce and Costello will be set at a later date, according to police.

Earlier Friday night, Scott and Nelson Piquet Jr. had an on-track incident in the closing laps of theToyotaCare 250 that continued after the race. Scott cut across Piquet’s car on the cool-down lap, then the two drivers scuffled on pit road after emerging from their cars.

Piquet shoved and kicked Scott in the crotch, while crew members for RCR and Piquet’s Turner Scott Motorsports team fought before being separated by officials. Both drivers were called to the Nationwide series hauler for a post-race consultation; series director Wayne Auton said there would be no penalties from the pit road scrap.

The alleged assault that became the subject of the police report occurred afterward at approximately 11:15 p.m. ET outside the track, in proximity to the driver/owner motorcoach lot. A Richard Childress Racing spokesman released a statement early Saturday morning confirming members of its team were involved. Turner Scott Motorsports also put out a statement confirming the incident, adding that “several members of another race team confronted a group that included Nelson Piquet Jr., resulting in the arrest of two individuals from the other race team.”