Trickle, a long-time Lincoln County resident, was found dead next to his pick-up truck just after noon. His truck was parked at Forest Lawn Cemetery on Highway 150 East in Boger City.

Authorities said Trickle called The Lincoln County Communications Center and said “there would be a dead body and it would be his.” 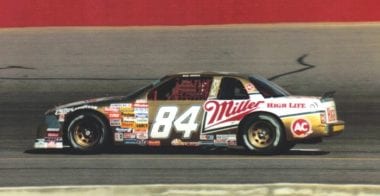 Communications Center workers tried to place a return call to the number but did not get an answer.

Trickle was a short-track hero who won more than 500 regional races as a part-time driver from Wisconsin, according to longtime friend and former president of Charlotte Motor Speedway Humpy Wheeler.

“He won a tremendous amount of races but never got national acclaim because he won in a regional area,” Wheeler said Friday.

According to the book “Golden Age of Wisconsin Racing” Trickle was billed at tracks as the “winningest short track driver in history.”

He won seven championships in ARTGO in nine years between 1979 and 1987.

Wheeler said he tried to convince Trickle to start racing NASCAR full-time in the early 1980s, but was unsuccessful because the Wisconsin native was making good money on the short track.

Several years later, though, he began racing for NASCAR — first on his own team and later for other people, including Stavola Brothers Racing, Butch Mock Motorsports and Larry Hedrick Motorsports.

Trickle became NASCAR’s rookie of the year in 1998, at age 48, the oldest driver to do so.

Cutting his teeth on many of the same midwestern short tracks, Wallace said Trickle “was the guy that taught me almost everything in the American Speed Association (ASA).

“And he was the guy that I battled right to the end for my 1983 ASA championship. He was a legend. A man that’d won over a thousand short track races, was one of the most winning short trackers in America, was a role model to many short track racers coming up.”

He never won a Cup series race in 303 starts but did win two races in what is now the Nationwide Series, with his last victory coming in 1998 at Darlington, S.C., holding off Dale Earnhardt Jr. for the win.

“I have no regrets. I’ve enjoyed everything, ” Trickle told the Observer in a 1992 interview. “It ain’t what I’ve done, it’s what I can do that counts.”

In recent years Trickle raced occasionally in Wisconsin, including the 2007 Slinger Nationals and in the ASA MidWest Tour.

“I’m firmly convinced that if he had started (NASCAR) Cup racing earlier, he would’ve been one of the biggest winners of all time,” Wheeler said. “He would have been another Waltrip, another Petty.”

But Trickle managed to become something of an American icon in his own right, thanks to his double-entendre nickname.

During his racing career in the 1990s, the Sunday night dialogue on ESPN’s Sports Center went something like this: “Dale Earnhardt won the race followed by Ernie Irvan and Kyle Petty.”

Then in a low voice, announcer Dan Patrick would say, “Oh, by the way, DICK TRICKLE finished 10th.”

News of Trickle’s death as NASCAR’s elite racers are in the Charlotte area for the Sprint All-Star Race at Charlotte Motor Speedway.

“Personalities like Dick Trickle helped shape our sport,” NASCAR CEO and Chairman Brian France said in a statement Friday. “He will be missed.”

Trickle’s granddaughter Nicole Ann Bowman was killed in a 2001 car accident in front of East Lincoln High School and is buried in the cemetery where police found his truck and body.

Tom Higgins, a longtime NASCAR writer and friend of Trickle’s, said the former race car driver was distraught after his granddaughter’s death.

“He never, ever got over that,” Higgins said.