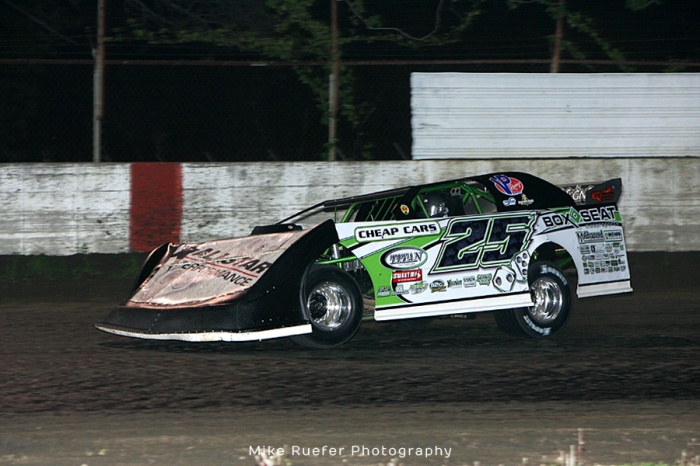 DAVENPORT, Ia. (May 18, 2013) – Late Model race fans were seeing double Friday night at the Davenport Speedway. The racetrack played host to both the Corn Belt Clash Late Model Series and IMCA Late Models, with all the action taking place on the half-mile oval.

Jason Feger was the big winner in the Corn Belt Clash-Karsyn’s Krusaders 40. Feger used lapped traffic to take the top spot away from Andy Eckrich on lap 16. Once in front, the Bloomington, Illinois driver would lead the rest of the way to the checkers and the $3,000 payday.  Andy Eckrich would hold on to the second spot, despite several challenges from his brother Denny, who finished third. Ray Guss Jr. was the top local finisher, taking fourth ahead of Justin Kay.  Skip Frey, Andy Eckrich, and Rich Bell won the CBC heat races. Andy Eckrich also won the Fast Dash.

In the IMCA Late Model feature, Tom Darbyshire made the trip from Yarmouth, Iowa a good one as he ended up in victory lane. Andy Nezworski started on the pole and led the first thirteen laps. Darbyshire worked Nezworski high and low, before taking the lead for good, on lap 14. Nezworski held on for second, with Nate Bueseling finishing third. Mike Murphy Jr. and Justin Kay rounded out the top five.

Steve Stewart of Burlington, came away with the feature win in the IMCA Modified main, which wasn’t kind to the race leaders. Early race leader, Rich Smith brought out the yellow flag on lap eight. On the restart, Kelly Meyer went out the front, until he was the reason for the cautions at lap 13.  Stewart and Tim Arp would exchange the lead a couple of times over the last two laps, with Stewart leading at the checkered flag.  Arp would finish in the runner-up spot.  Eric Barnes, Craig Crawford, and Brian Bushong completed the top five.

Jeremy Marquette took all of one corner to take the lead of the Street Stock feature from the fourth starting spot. Marquette led the rest of the way to the checkers. Cary Brown was best of the rest, finishing second. Ron Turner, Rob Nylin, and Marcus Ostofi, passéd around third place until they finished third through fifth, in that order.

Joe Zrostlik came back to the 4-Stock class and came away with the checkered flag. Zrostlik and Aaron Hitt put on a great side-by-side show for three laps, before Joe took the lead for good and the victory. Hitt held on for second, with Steven Phillips third, Scott Wolfe and Allen Morris finished fourth and fifth respectively.

Next Friday, May 24th, will bring the IMCA Modified Madness 50 to the Davenport Speedway. $2,000 will go to the winner of the 50-lap main. Weekly point races will be held in the other classes.