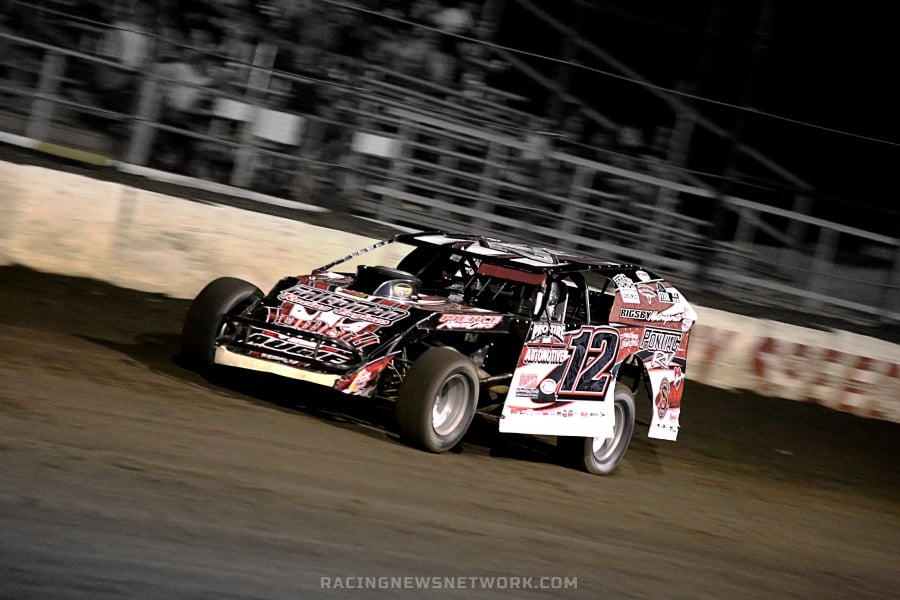 Lance Dehm bested a stout field in modified qualifying at a 13.985. Six heat races were held, with the top three transferring to the 40 lap, $5000 to win show.

In the first heat race, Lance Dehm had a healthy lead until the rear end went out in his car and was done for the weekend. Levi Kissinger took the win over Ricky Tinch and Devin Wright.

26 cars lined up for the Casey’s Modified Nationals. Chad Kinder took the lead at the start with Matt Mevert taking second from Levi Kissinger. Kinder went to the top side, as Mevert applied pressure to Kinder for the lead. Kissinger had Steven Brooks to contend with for third, with Jim Farris, Jay Ledford, Jeff Curl, Kasey Schrock, Jacob Poel, and T.D. Burger following.

After a caution on lap two, Kinder led Mevert by two car lengths, with Brooks taking over in the third position. On lap five, race leader, Kinder, slowed in turn two to bring out the caution and end his night. The restart had Mevert in the lead, with Brooks and Farris in the hunt. As Brooks was going for the lead on lap six, Brooks stalled in turn four, to bring out the caution and dash his hopes for the night.

On the restart, Farris pulled beside Mevert for the lead, but another caution halted the field. As the field went back green, Mevert pulled out to a three car length lead, with Jeff Curl looking to overtake Farris for second. Five car lengths back in a battle for fourth, Kissinger had to hold back the challenges from Ledford, Poel, and Jeb Friedman.

Jeff Curl moved by Farris on the ninth lap and closed the margin on Mevert. On the 11th lap, Curl pulled alongside of Mevert and on the next lap, Jeff Curl moved into the lead. The caution came out on lap 13 as Devin Wright looped it in turn two. The running order had Curl leading Mevert, Farris, Ledford, Poel, Friedman, Jeff Leka, Brian Lynn, T.D. Burger, and Donovan Lodge.

On the restart, Mevert tried to get under Curl, but Curl held on for the lead. Just past the halfway mark, the track started to turn dry slick, making passing difficult. Although the remaining cars ran single file, Mevert looked for an opening on the bottom. Jeff Curl gave Mevert just enough room, but Mevert could never get by. Cautions came out on laps 30, 33, and each time Curl pulled out to a five car length lead. At the checkered, Curl had a comfortable margin and took the biggest win of his career.

An elated Jeff Curl commented, “We have had such a great year. It’s nice to defend our home turf against some of the biggest names in modified racing. Thanks to the A.M.S. for coming out. This is a dream.” Jeff Curl took his seventh win and was followed by Mevert, Poel, Farris, Ledford, Leka, Lynn (hard charger), Friedman, Lodge, and Barber.

The UMP Late Models ran a 40 lap, $3000 to win event. Kevin Weaver used the bottom groove to take the lead from McKay Wenger with eight laps to go and held off a determined bid by Bobby Pierce to take his third win at Fairbury and give the “Flatland Flash” a little momentum heading into this weekend’s World 100. “I knew our car was good. We just had a little work to do to it, when we unloaded, “said Weaver in victory lane. Pierce, Ryan Unzicker, Brandon Sheppard, Daren Friedman, McKay Wenger, Frank Heckenast Jr., Daniel Flessner, Torin Mettille, and Scott Bull completed the top ten. Weaver started 11th in the race and was the race’s hard charger. Wenger topped 27 other drivers in qualifying at a 12.925. Heckenast Jr., Wenger, and Pierce took heat wins; while Wes Steidinger won the semi.

Rick Thomas turned back the challenge from Don Hilleary to take the $500 to win, UMP Street Stock feature. Thomas picked up his fourth win and 39thcareer, street stock win. “ Don gave me a good race. I appreciate all the fans that came out and thanks to all the people that have helped our team”, Thomas said in victory lane. Matt Maier, Calvin Coleman, Darrin Kohler, Nick Clubb, Eric Gaus, Lee Hall (hard charger), Terry Miller, and Chris Prince rounded out the top ten.

Fairbury Speedway takes this weekend off, but returns in two weeks with the final race in the Alkota “Keep It Clean” series race.