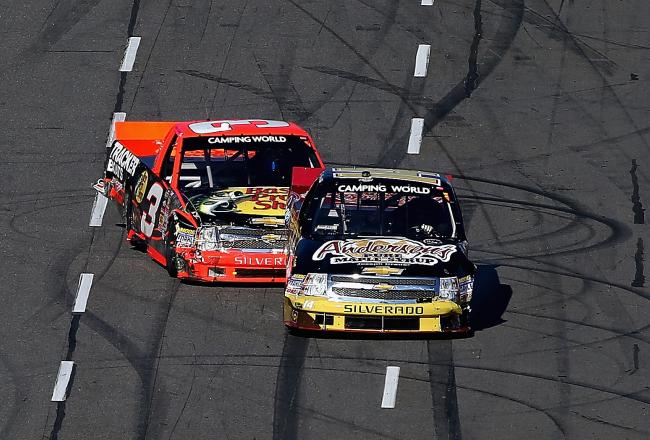 Harvick, who was driving for another team in the Kroger 200, and Dillon were racing for second when their trucks collided and knocked both from contention.

Harvick, who is leaving Richard Childress Racing after 13 seasons in Sprint Cup to join Stewart-Haas Racing, implied that nepotism and lineage were factors in his decision. Ty Dillon has raced in the Camping World Truck series the past two seasons and is moving into Nationwide next year to supplant his older brother, Austin, who is expected to move into Sprint Cup and effectively take over the ride being vacated by Harvick.

“(Dillon) just dumped me,” Harvick said about the crash. “Exactly the reason why I’m leaving RCR because you’ve got those kids coming up, and they’ve got no respect for what they do in this sport and they’ve had everything fed to them with a spoon.

“So I cut him slack all day, and he just dive-bombs me in there, dumps me. It’s a shame you’ve got to get taken out by some rich kid like that.”

Harvick still has four races remaining in the No. 29 Chevrolet with RCR and is ranked fourth in the Chase for the Sprint Cup, 25 points behind Jimmie Johnson. He has 22 victories and 205 top 10s in 462 starts with the organization, which is the only team he has raced for in NASCAR’s premier series. He stepped into a ride that opened when Dale Earnhardt died in a crash on the last lap of the 2001 Daytona 500.

Dillon slammed Harvick several times during the ensuing yellow flag. Harvick’s truck also stopped near Dillon’s pit stall, where it was accosted by several members of Dillon’s crew, one of whom appeared to hurl an orange hammer at it.

Dillon said the crash was “typical Kevin Harvick and pretty much his career at RCR” and had a different view of the wreck.

“He was kind of hogging the bottom, and I just kept diving to the inside,” Dillon said. “I was low, and he kept chopping down, chopping down. It was getting toward the end of the race and I gave him a tap and he got sideways, but then he hit the brakes to try to brake-check me in the middle of the corner.”

Dillon said he tried to talk about the incident with Harvick, but the Sprint Cup veteran left.

“I can’t believe that happened,” he said. “To tear a truck up after the race and totally take us out, and then to not stick around after the race – to walk off and not even want to say anything to me — I’m sure he’s tweeting something now about it.

“So he can’t even face me afterward. I’m pretty disappointed in the things that went down. I used to look up to that guy. I guess he doesn’t understand the circumstances of what’s going on … To tear a truck up and act like a punk on pit road – and stopping by my pit stall when my guys are coming out – that was pretty ridiculous. I’m not happy with him. And for him to not even stick around, that’s pretty sad, too.”

Childress told MRN.com and the Sporting News that Harvick would race Sunday at Martinsville in the No. 29 (“We’re still rolling.”) but also said he was “very disappointed” in Harvick.

“That’s all I can say,” Childress said. “I’ve got too much class to say what I want to say right now. When I say it, I will say it to his face.”

Fairly good day for the cup car! Truck is not real good…