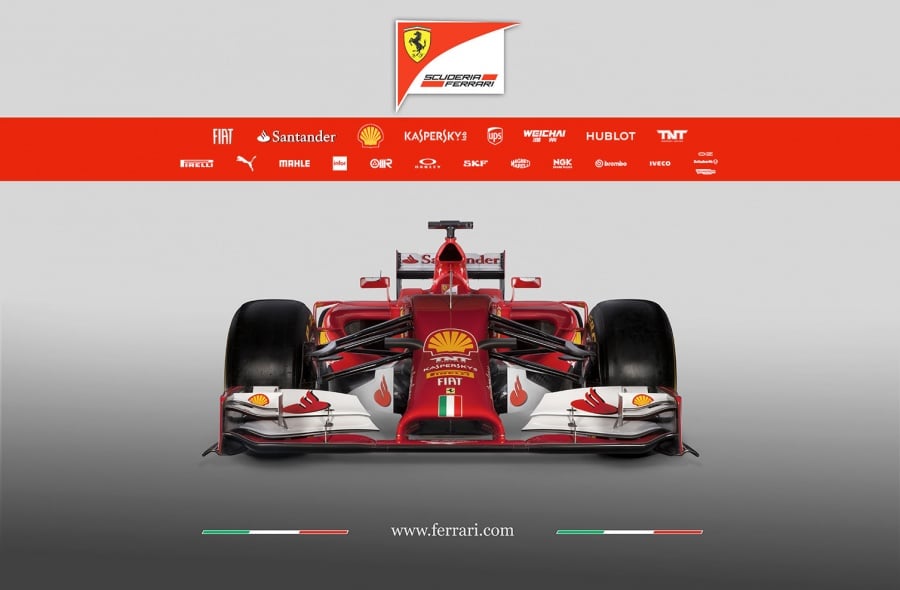 The Ferrari F14 T is the sixtieth car built by Ferrari specifically to take part in the Formula 1 World Championship. The name comes from the combination of the current year and the introduction of the turbo-compressor in the Power Unit. Although the traditional gestation period for a new Formula 1 design is little over twelve months, this project, which goes by the internal code name 665, began life more than two years ago.

2014 is an exceptional year in the history of the sport, with a raft of rule changes that commanded an early start to allow the ground up revision of every aspect of the Ferrari F14 T design. To cope with the unprecedented challenge of running three car projects simultaneously during 2012, the Scuderia was fortunate to be able to call on the talents of experienced engineers to guide the project in its early stages.

Chassis
Followers of the Scuderia will be able to see some of the heritage of earlier Ferrari designs in the Ferrari F14 T – the obvious areas of continuity are the pull-rod front and rear suspension. However, beyond this superficial similarity there is little to connect the Ferrari F14 T 2014 car to its predecessors. Externally, the car is very different to the cars of recent years: changes to the regulations to lower the chassis and nose in the interests of driver safety give the Ferrari F14 T a very different appearance to the F138 and presented the designers with a real challenge to repackage the front suspension into a much lower monocoque.

The Ferrari F14 T 2014 rear wing family shares nothing with the previous year owing to three rule changes requiring a much larger stroke DRS, a much smaller overall rear wing depth and removal of the beam wing, thereby requiring the main plane to be supported by central pillars. The front wing is regulated to be 75mm narrower per side in order to make it less vulnerable to collisions with other cars and with the barriers. This change, perhaps one of the less noticeable visual differences to the 2013 cars, has a profound effect on the aerodynamics of the vehicle. The front wings used since 2009 have all featured elaborate measures to encourage the wake of the front wing endplates to pass around the outside of the front tyres in order to maximize the downforce on the car. An innocent change of just 75mm to the position of the wing tip has required us to reinvent completely the front wing aerodynamics on the 2014 Ferrari F14 T car.