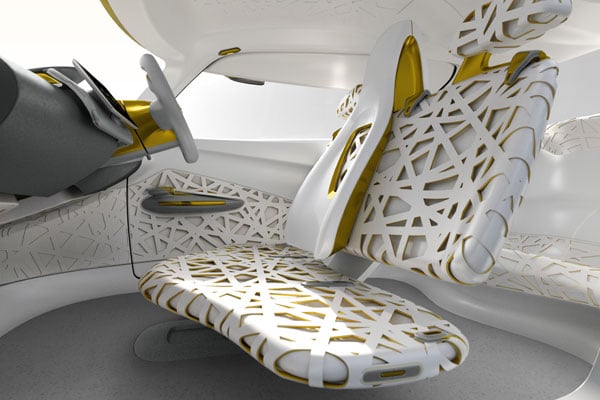 The Renault Kwid is the first Renault concept car to be unveiled outside Europe, at the Delhi Auto Show 2014. It showcases the company’s commitment to new markets like India, Russia or Brazil. Robust and hyper connected, thanks to its flying companion, Kwid aims to meet the needs of young customers in these markets.

Renault Kwid was designed with inputs from Renault Design India and is covered by the ‘Explore’ petal of Renault’s lifecycle-based design strategy.

Its protective guards, chunky wings, very short overhangs and oversized wheels give this compact concept a robust appearance. The Renault Kwid comes with a two-wheel drive transmission, but projects the facade of an off-road car.

The interior of the Renault Kwid is designed to serve as a snug cocoon and is inspired by a bird’s nest. The vehicle’s seats, suspended over a solid base in white, give an impression of lightness, while their 2-tone elastomer material provides a sense of brightness. Renault Kwid Concept also features rear air conditioning with controls on the driver seat’s back as well as ventilation through concentric perforations. The dashboard is an integrated tablet for commanding the navigation of the Flying Companion.

The Flying Companion is the first of its kind in the automotive world. Taking off from the rotating rear portion of the Renault Kwid roof, it can scout traffic, take landscape pictures and detect obstacles on the road ahead.

Renault Kwid is also Z.E ready and can receive batteries for electric use. It is powered by the latest-generation downsized 1.2-litre petrol turbocharged engine mated to dual-clutch transmission EDC. Other technology-rich features include electric operated front bench seat on a center rail, electric opening doors, LED lighting, lack of gearshift (command with touches next to the steering). The vertically-mounted TFT touchscreen display acts as the dashboard in Renault Kwid Concept and also provides access to connected services.

International, from conception to revelation

Renault Kwid is an international concept car, conceived by a team of international designers, coming from France, India, Russia, Japan and Brazil.

The first Renault concept car to be unveiled outside Europe, Renault Kwid also emphasises India’s significant place in Renault’s global strategy as well as the company’s ability to offer appealing products in the compact car segment.

“This is the first time we have chosen to reveal a concept car outside Europe and this is an eloquent sign of our commitment to India. Young customers in India are often trend setters, looking forward to pushing the envelope when it comes to technology and enjoyable drives. Renault Kwid with its Flying Companion, meets this forward-looking spirit with both its dynamic styling and hyper connectivity.”