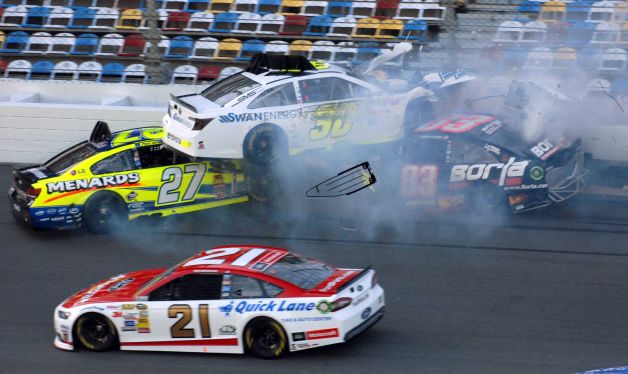 Parker Kligerman Upside Down In Big Daytona Crash During Practice

DAYTONA BEACH, Fla. — Rookie Parker Kligerman involved in the big Daytona crash went for a long slide on his roof after the front end of his No. 30 car got on top of the outside wall and into the catchfence as part of a crash that claimed several vehicles in opening Sprint Cup Series practice Wednesday at Daytona International Speedway.

The big Daytona crash appeared to begin when Joey Logano and Matt Kenseth made contact in tight drafting practice, causing a number of vehicles to go sideways. Kligerman got the worst of it, riding up and over the car of Paul Menard, and then getting pushed from behind by the vehicle of Ryan Truex. The front end of the No. 30 car slid along the top of the wall and grinded against the catchfence, causing some damage to the mesh fencing. With Truex still behind him, Kligerman rolled over and slid on his roof before being extricated from the car.

Fortunately, no drivers were hurt in the accident, and no spectators were impacted by the damage to the catchfence.

“I guess that was the first time I’ve ever flipped over. Never done that before in a race car,” said Kligerman. “I assumed it would be rougher, but it was actually really soft. I saw the whole thing go down. I’m up in the fence kind of floating along. Thankfully none of the fans got injured …. Obviously, it was a scary situation when a car gets that close to the fence. Then it just flipped over softly, and I slid on the roof. I guess the strongest thing going through me at that time was anger over the wreck. Most importantly is the fans are okay and I’m OK.”

A number of drivers were involved in the big Daytona crash among them Logano, Kenseth, Truex, Kligerman, Menard, former Daytona 500 champion Trevor Bayne, and veteran Dave Blaney. The accident came shortly after an earlier accident involving Cole Whitt, Casey Mears and Brian Vickers, which proved just a prelude to the bigger one to come. According to NASCAR, six teams planned to move to backup cars.

“Turns out Joey was bump drafting the 20 (car of Kenseth) in the middle of the pack when we were trying to getup to speed,” Menard said. “I guess that’s the end result.”

Parker Kligerman said he was about to pull off the track and park his car for the remainder of the session. His Swan Racing team planned to try and repair Whitt’s primary and put Kligerman into a backup.

“I thought we were good. We were going to quit for the day, probably, pack it up and wait until tonight,” Kligerman said. “I guess from what I can see, the 22 (car of Logano) was just being overly aggressive. It’s a shame. He’s supposed to be a veteran. You go up here to the Sprint Cup Series, and it’s supposed to be the best of the best, and you’ve got a guy in practice who wants to race people like that like it’s the end of the Daytona 500. … I don’t quite understand that one. I’ll have to talk to him about how all that went down.”

The accident unfolded as the cars rolled off Turn 4 and into the tri-oval. “I guess that’s when the 22 car got close to me, got right on me,” Kenseth said. “I moved my car to the left a little bit, and we had plenty of room for everybody, and then he kind of clipped my right rear and that seemed to trigger it. He had to slow down after that, so that seemed to trigger the wreck. Looked like it, anyway.”

Logano said Kenseth made a move as if he were headed down the race track. “I had the run, so I was going to fill that hole and then he started to come back up, and I was there,” Logano said. “Maybe I shouldn’t have been racing as hard as I was in practice, but everybody was in a big pack there trying to make things happen. As soon as he came back up, I checked up a little bit, and then the 21 (car of Bayne) hit me from behind and we spun out. It happens. That’s Daytona for you.”

Those drivers bound for backups — which according to NASCAR included Logano, Kligerman, Menard, Truex, and Blaney from the second incident, and Vickers from the first — will have to start at the rear of Thursday’s two 150-mile Budweiser Duel qualifying races. Menard, who led one of Saturday’s practice sessions and had had one of the faster cars of these Speedweeks, is now bound for a backup.

“We had a really fast Chevrolet, all the RCR cars were extremely fast. Our backup car is pretty good, too,” he said. “It comes out of the same shop, obviously. It’s not as good as our primary because it’s our backup. Sometimes a slower car drives a little better too, so we’ll see. I have no reservations about the 150. We’ll try to race our hardest and get the best starting position we can.”

Richard Childress, who owns Menard’s car, following the big Daytona crash could only shake his head. “These guys have just been cooped up all winter, and they’re going at it real hard. I don’t know what they were doing there,” he said. “It’s a shame to keep tearing these cars up. It’s going to be a week like that. They get a little more run with this little bit more spoiler, and I think some of them are struggling.”

Bayne received only nose damage, and Wood Brothers Racing planned to repair his primary vehicle. “The problem is the closing rate is so fast, that if you try to move you have to be so decisive here,” he said. “If you commit to a lane, even if it’s going to send you backward, you almost have to stay there because if you try to switch back and forth a couple of times, it isn’t good. It teaches me something for these Duels — to get in a lane, stay there and ride it out.”

AJ Allmendinger was fastest in the session, which was cut short due to repairs that needed to be made to the catchfence — which was reinforced in the wake of last season’s Nationwide Series crash involvingKyle Larson’s car. A Daytona spokesman said the fence performed the way it was designed, suffering “some minimal damage” along the frontstretch. One cable and some of the mesh fencing had to be repaired before a second Sprint Cup practice Wednesday evening, which was completed without incident.

The day’s first crash forced both Vickers and Whitt to backups. A cowl flap from one of the cars involved in that incident stuck in the front end of Jeff Gordon’s car, in the crease between the hood and the front grille. But the No. 24 team was able to repair the damage and did not move to a backup.

It was a costly afternoon for drivers like Whitt, Truex and Blaney who still need to race their way into the Daytona 500 through Thursday night’s qualifying races. Blaney, driving a car for Humphrey-Smith Racing, said he didn’t have a backup car immediately available.

“We were coming to the tri-oval behind Ryan Truex, and he checked up, and by the time I got checked up, it was on and cars were all over the place,” Blaney said. “Going down the back straightway right before that, I told myself, ‘I don’t need to be out here right now. We got no backup car.’ But I was in the outer lane and there was no bailing, so it got us.”

To avoid the big Daytona crash some teams decided against drafting altogether. “That’s the reason you see the 3, 48, and the 88 just sitting,” Childress said, referring to the cars of Austin Dillon, Jimmie Johnson and Dale Earnhardt Jr. “Tonight’s when you want to go, when the weather’s like it’s going to be when you’re racing anyway.”