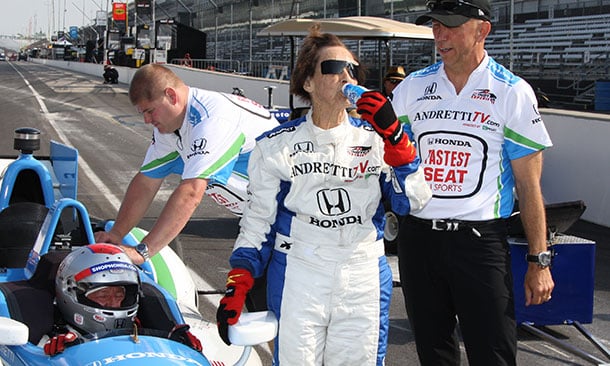 “Let’s do that again,” said Edith Pittenger as she leaned into the cockpit to thank Mario Andretti for the high-speed two-seat Indy car ride around the historic Indianapolis Motor Speedway.

Nearly 40 family members gathered trackside May 13 to cheer on the resident of Muncie, Ind., and mark the special occasion.

“She did this when she was younger … 96,” said her son, Jay Pittenger.

That was 2008 with two-time Indianapolis 500 Mile Race winner Arie Luyendyk behind the wheel of the stretched Indy car to set an unofficial record for the oldest person to take a lap on the famed 2.5-mile oval. Now, at 102 years old, the spry great-great-grandmother sent a message to potential challengers.

“That was fun; come and try it,” said Edith Pittenger , who raised her arms as Andretti sped over the Yard of Bricks that mark the start-finish line.

The two-seater ride six years ago was a Christmas present from family members, while this excursion was organized by Indy Racing Experience co-owner Scott Jasek.

Edith Pittenger attended her first Indianapolis 500 in 1948 when her son, Lynn, was an usher, returned for more than two decades with a gaggle various family members in tow. The 1969 race stands out in her memory – the year Andretti led 116 laps en route to victory for car owner Andy Granatelli.

Andretti, who will be recognized on Legends Day (May 24) on the 45th anniversary of his victory, joined Indianapolis Motor Speedway President J. Douglas Boles and the large family contingent in congratulating Pittenger.

“It just shows that you can be too young to ride but you’re never too old,” Andretti said.