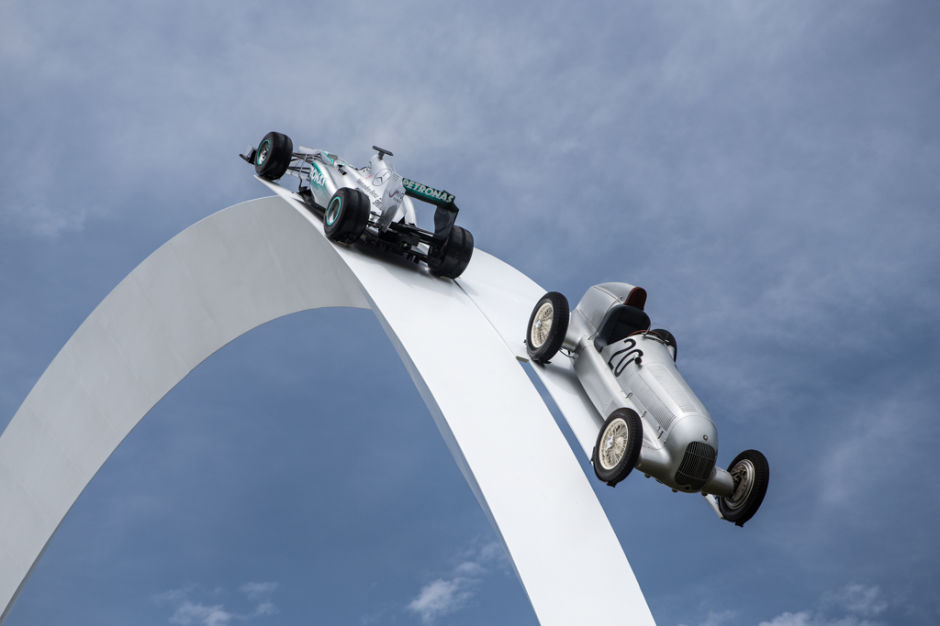 And the Mercedes Arch sculpture itself? Artist Gerry Judah has created yet another breath-taking centrepiece for the Festival of Speed – which, or the first time, reached over the top of Goodwood House. You may have already seen our photo of the launch… now here’s a full gallery that shows it in all its glory in daylight.

Could 2014 be the most spectacular central feature display to ever appear at the Goodwood Festival of Speed? For the first time ever, the Mercedes Arch feature soars dramatically over the top of Goodwood House, the structure measuring 45 metres and rising 26 metres in the air. It weighs 160 tonnes.

As is tradition, the launch party took place last night night amid a dramatic fireworks display. It celebrates 120 years of Mercedes-Benz in motorsport and features a replica of the 1934 W25 raced to victory at the Nurburgring Manfred von Brauchitsch and a 2013 Mercedes AMG Petronas F1 W04 – the same chassis driven to 15 victories by Lewis Hamilton.

The Mercedes Arch launch was hosted by Lord March and Michael Bock, head of Mercedes-Benz. The unveiling was accompanied not only by fireworks but also a fleet of Mercedes-Benz road and race cars making a dramatic and unique run up the Goodwood Hill as the sun sets.

A century-old Mercedes Grand Prix car, an SSK from 1928, the mighty W 196 R from 1955 and a fire-breathing Sauber-Mercedes C9 from 1989 were joined by a stunning SLS AMG Black Series. The Mercedes Arch emerging from the darkness with striking glowing bodywork for the occasion.