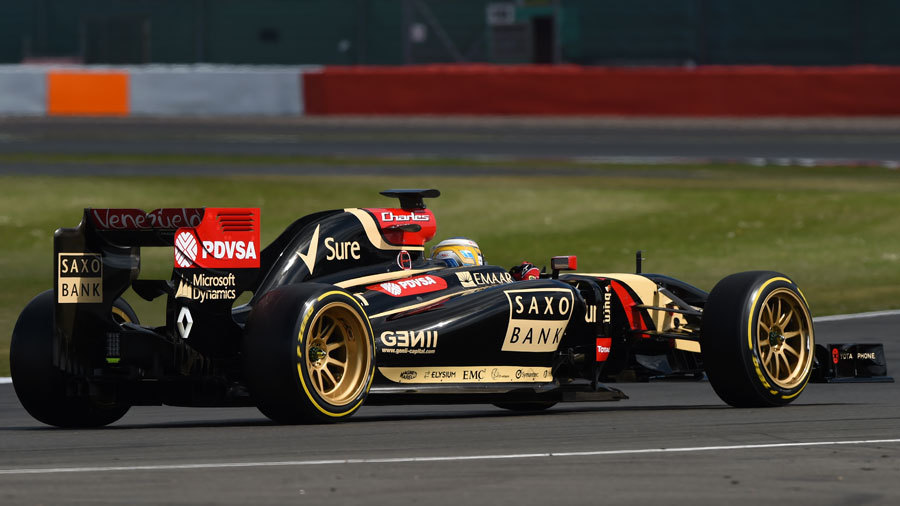 Pirelli’s new F1 wheels are an 18″ concept. They formed the centre of attention at Silverstone, with Lotus F1 Team reserve driver Charles Pic giving the new design its debut on Wednesday morning.

See the photos and watch the video of the new F1 Wheels on the Lotus F1 below.

Pic headed out on the new F1 Wheels shortly after 9am in the current Lotus E22 equipped with the new 18-inch tyres and completed 14 laps of the Silverstone circuit. With the concept tyre designed principally to showcase aesthetics rather than performance, and a general-purpose compound, the lap times were not the focus. Instead, the objective was to gauge reaction to the very different new design, which received the thumbs up from most observers.

The new f1 tyres were designed and built in accordance with Pirelli’s premium strategy in Milan. The key technical advantage of the new f1 wheels is a stiffer sidewall that helps maintain the structural rigidity of the tyre and also makes it easier for the tyre to maintain a constant pressure – as there is less actual air inside the tyre. The new tyre is physically bigger, which makes it much more relevant to the Ultra High Performance tyres that are seen on the road, leading to greater technology transfer.

The new f1 wheels tested today have the same width as the current 13-inch tyres (245mm at the front and 325mm at the rear) but a diameter that is bigger by 30mm. The weight is approximately the same as the 13-inch tyre, because although the diameter is bigger, there is a smaller sidewall. The total weight, including the rim, is around 4 kilograms heavier.

“In our view, the new F1 wheels looked stunning fitted to the Lotus, and the reaction has already been felt all over the world. These are just a prototype concept, but if the teams decided that they wanted us to proceed in this direction, we have the capability to carry on development in this area and come up with a production-ready version in a comparatively short space of time. We’ve heard a lot of opinions already and we look forward to canvassing other opinions in the coming weeks and months. Even though performance wasn’t by any means priority here, the new tyres still behaved exactly in line with our expectations, so we’re clearly potentially at the beginning of a huge development curve, with the wheel and tyre size rules having remained unaltered for many years. These new tyres were clearly the focus of the test, but of course we managed to complete a lot of work for next year and the shorter term as well, with the two days of dedicated tyre testing from Ferrari, Marussia, Lotus and Red Bull as well. Having learned a lot from the previous tyre tests in Bahrain and Barcelona, we were now able to carry out a lot of more targeted work for 2015, on a fast and demanding circuit.”