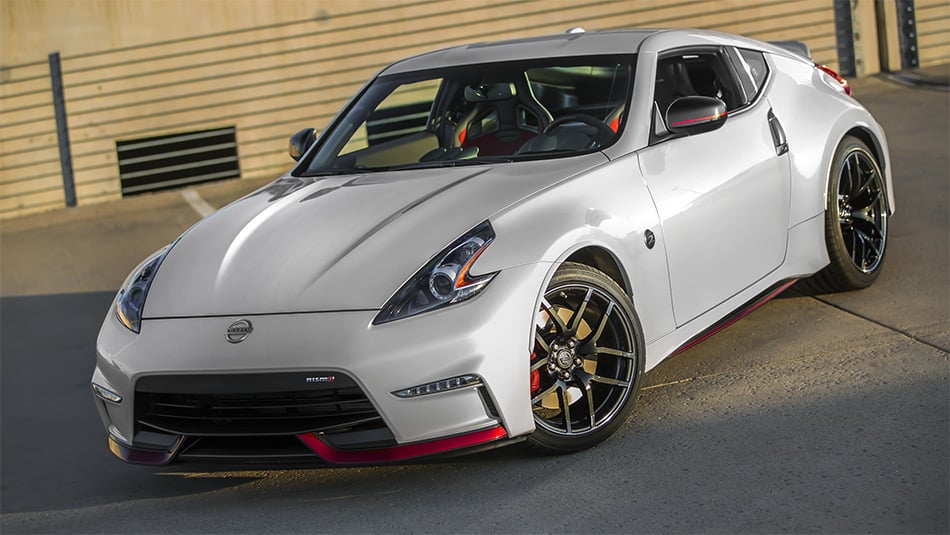 The signature NISMO® red stripe accents the integrated front spoiler, continues down the redesigned side sills, wraps around the black side view mirrors and finishes off the lower portion of the redesigned rear fascia.

The most striking change for the 2015 Nissan 370Z NISMO is its revised exterior design. Its GT-R-inspired functional and fully integrated aerodynamic body pieces have been redesigned to provide an aggressive and more aerodynamic new appearance – as well as optimizing front and rear downforce.

Key changes include a new, deep front fascia with LED Hyper Daytime Running Lights, black headlight bezels, NISMO emblem and signature NISMO red stripe accent on the integrated front chin spoiler. The red accent continues down the redesigned side sills, on the black-color sideview mirrors and across the lower portion of the redesigned rear fascia. The unique NISMO rear spoiler has been reshaped and downsized.

The legendary Z® has evolved over 43 years and six generations. It has been tinkered with. It has been modified, improved, enhanced. Made faster. It has all led to this: the most powerful Z® engine ever. A 3.7-liter, 350 horsepower beast with 276 lb-ft of torque and a 7,400 rpm redline. At the tail end, the whole thing growls through a monstrous chromed-out H-pipe dual exhaust system.

The 2015 Nissan 370Z NISMO is a little lower, a little longer, and as far as the wind is concerned, it’s a little more elusive. The added power under the hood means that it also needs a little more downforce, so the front fascia has been given a track-tested redesign, and the rear diffuser and spoiler have been reworked.