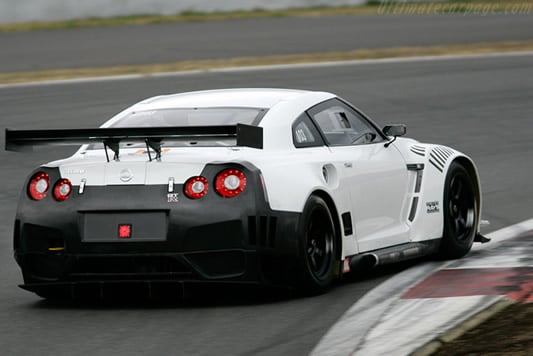 The prospect of a new world championship, run under fresh regulations was appealing enough for Nissan to develop the highly acclaimed GT-R into a GT racer. It was going to be the first time since 1996 that the (Skyline) GT-R would compete in international GT events. While the FIA GT1 World Championship will not kick off until the spring of 2010, the cars built to the new regulations could already compete from 2009 onwards. Nissan Motorsport (Nismo) opted to use the extra year and worked had to get the new car ready for the official pre-season test at Paul Ricard.

To comply with the regulations many of the trickery that make the GT-R such a revered road car had to be taken off the car. In fact apart from the actual shell of the car, very little is carried over. A naturally aspirated V8 engine, displacing just over 5.5 litre, replaces the twin-turbocharged V6 from the road going version. Breathing through the two mandatory restrictors, this production based engine is officially rated at 600 bhp and 650+ Nm. The advanced all-wheel drive system also had to make way for a more conventional rear-wheel drive layout. A sequential 6-speed gearbox is mounted in unit with the differential for the best weight balance.

Whereas the existing GT1 regulations allowed for extensive changes to the chassis, the 2010 regulations are considerably stricter to cut the development costs of the car. So much of the basic monocoque of the road going GT-R has also found its way into the new racer. Suspension is by McPherson struts at the front and double wishbones at the rear. Both ends feature fully adjustable dampers. Optional on the road car, the GT1 machine sports carbon ceramic discs all around for optimal braking. Additional vents and ducts as well as side-exhausts, a front-splitter and a sizeable rear-wing finish off the competition package.

For 2009 Nismo had carefully laid out a plan that included four outings with a single car in the FIA GT Championship. With the new cars expected to be slower than the existing GT1 cars, there was little point in going for a full season entry. The British Gigawave team, run by Nigel Stepney, was assigned to run the car for experienced
drivers Michael Krumm and Darren Turner. The time between the outings was going to be used for further development of the car. Swiss Ford tuner Matech also opted to race their proposed 2010 car in the 2009 season, fielding two cars for most of the year.

The GT-R GT1 was ready in time for the pre-season test and made its debut shortly after in the Tourist Trophy race at Silverstone. It qualified 11th, right behind the fastest Matech GT1 car, but failed to finish the race. The season opening event set the scene for the entire year with the GT-R racer just off the pace and struggling with reliability. For the grueling Spa 24 Hours the two drivers were joined by Anthony Davidson. Starting from eighth, the car finished a much delayed 13th overall but 3rd in class. During the final race of the year at Zolder, the new Nissan was showing good pace but brake problems in the race threw it well down the order.

To be eligible for the 2010 FIA GT1 World Championship a manufacturer has to field at least four cars. Gigawave was expected to continue with the GT-R but unexpectedly the team closed its shop late in 2009. At that point Nissan had already signed a deal with Swiss Racing Team for the other two cars. In January Nissan announced that Sumo Power GT would fill the void left by Gigawave. At the same time Nissan released the first details of the 2010 version of the car. The specifications were left unaltered but numerous aero tweaks were made for improved performance. Drivers and other details will be announced at a later time.