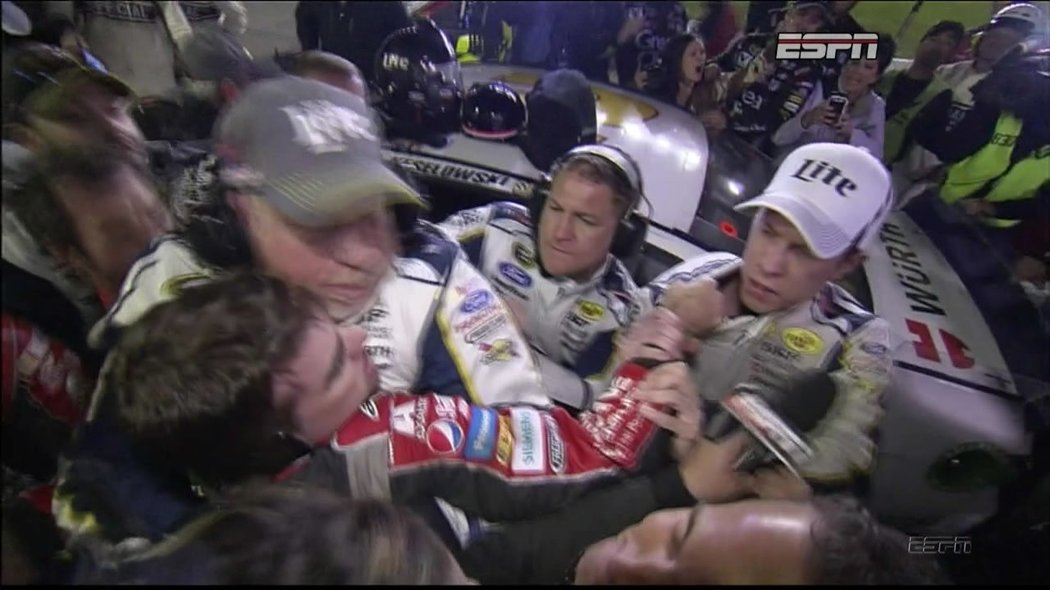 Jeff Gordon vs Brad Keselowski Fight breaks out following Texas Motor Speedway NASCAR event. Jeff Gordon said he wanted to do more than talk. Brad Keselowski said he’d rather “have enemies in NASCAR than have friends and be sitting at home.”

Gordon, upset after contact between the two during the first of two attempts at a green, white, checkered finish, pulled his car alongside Keselowski’s on pit road after the event, quickly climbed out and attempted to confront the Team Penske driver.

Crewmembers of the two teams were already pushing and shoving each other as Gordon approached Keselowski. The exchange between the two drivers quickly escalated into a physical confrontation that eventually involved crewmen from both teams, as well as members of other organizations, including driver Kevin Harvick.

Both Gordon and Keselowski suffered cuts to their faces in the melee.

“It’s his disregard for what’s going on out there,” Gordon said afterward. “He does things that force his team to have to defend him like that. I mean it’s a shame. It’s a real shame, you know?

“He made an over-aggressive move. Those moves are fine if you’ve got a slamming, banging race. But he cut my left rear tire and that was it for me.”

The two drivers are among the eight that are competing for one of four spots in the Championship Round of this year’s Chase for the Sprint Cup at Homestead Miami Speedway. A final opportunity to secure a position awaits next week at Phoenix International Raceway.

Gordon, the points leader heading into Texas, was out front when the caution flag came out at lap 332 of the 334-lap event for an accident involving Clint Bowyer. Keselowski was third on the restart, with Jimmie Johnson, Gordon’s Hendrick Motorsports teammate, in between.

Contact after the restart between Gordon and Keselowski sent Gordon’s No. 24 Chevrolet spinning. Although there was no significant body damage, Gordon had to pit to replace a flat tire under the caution.

“(Expletive) 2 car ran into us, that’s what happened,” Gordon told his crew when asked what took place.

On the ensuing restart, Johnson pulled away from Keselowski, and drove away for his 70th career win while Harvick made a last-lap pass to finish second, just ahead of Keselowski.

Gordon, after leading eight times for 49 laps, finished 29th and is now fourth in points. Keselowski is seventh.

“We’re going to take this fire that’s inside of us and this momentum, we taking it to Phoenix and we’re going to win that race,” Gordon said.

Keselowski, the 2012 series champion, said last year’s failure to make the Chase and compete at the level he expects was “not acceptable to me.

“I’m here to win races for (team owner) Roger Penske and for my team.

“That means when there’s a gap (on the track), I have to take it. If it requires a tiny bit of rubbing, that’s OK. Plenty of times where I got rubbed.”

It’s the second time during this year’s Chase that Keselowski has been involved in a post-race altercation. Last month, he was fined $50,000 and placed on probation through Nov. 12 for contact on pit road after the race at Charlotte Motor Speedway.

“Sometimes that rubs people the wrong way maybe but I didn’t see him do anything way out of line there,” Wolfe said. “There was a gap there and yeah, there was contact with the 24 — they were coming down for the win, a pretty important win for any of us. Just racing hard. (Gordon) could have given us more room, too, if he was worried about getting a flat tire.”

NASCAR’s Robin Pemberton, senior vice president of competition and racing development, said the new Chase format has created “just a lot of pressure out there to perform. It’s laid out there 100 percent all the time and I think we’ve seen that.”

Pemberton  said no drivers or team members were called to the NASCAR hauler after the Jeff Gordon vs Brad Keselowski Fight as shown in the video below. As is the case after any incident, officials will view all available video before making any decision regarding possible punishment.

“We’ll take our time (and) make all the right decisions that we can. We’ve got a lot of things to look at,” he said.

In the previous round, Keselowski pulled off a must-win effort at Talladega to remain in Chase contention. Now, with another incident hanging over his head, he’ll head to Phoenix trying to put Sunday’s altercation aside.

“If Roger Penske came to me tomorrow and said, ‘Brad, you drove that race wrong, you shouldn’t have done what you did, it would affect me,” he said.

“But the management team at Penske tells me to drive the way and I did and tells me there’s nothing to be ashamed of and continues to support me. And they’re my boss. …

“As long as they’re on my side, I feel strong and I feel proud and encouraged to continue.”

His No. 2 team won’t be affected by the most recent dust-up either, he said.

“They’ll probably get a couple of good laughs out of it and be even more hungry,” he said.