Brad Keselowski vs Matt Kenseth and Everyone At Charlotte 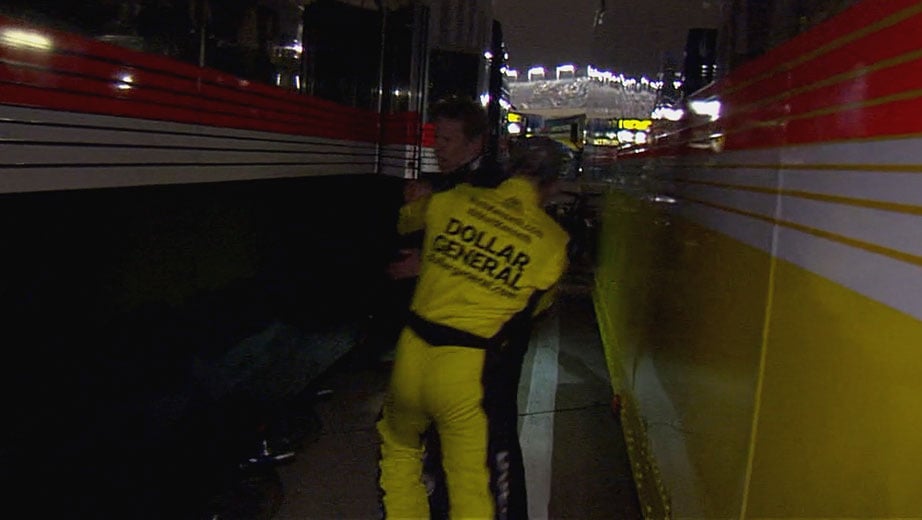 Watch all the videos below. Brad Keselowski vs Matt Kenseth actually went to a physical altercation after the Charlotte event.

CONCORD, N.C. — The new Chase for the NASCAR Sprint Cup format was supposed to add drama to the playoffs.

And boy, did it ever.

The finish of the Bank of America 500 at Charlotte Motor Speedway, which saw Kevin Harvicklock up his spot in the Eliminator Round, was wild indeed with tensions overflowing and 2012 Sprint Cup Series champion Brad Keselowski in the middle of it all.

Keselowski clipped Denny Hamlin’s rear bumper on the cool-down lap after the race, later hittingMatt Kenseth’s car after Kenseth had removed his seat belt. Tony Stewart was also caught up in the round of bumper cars, causing the No. 14 driver to retaliate by backing his car into the No. 2, crumpling its front. Hamlin was fired up in the garage and was shouting at Keselowski, with crew members from both teams also getting into it.

After cooling down in his hauler, Hamlin attempted to explain his side of things.

“I was going in Turn 1 and there’s a corner there, so you have to back off and he just plowed into us. He’s just out of control; he’s desperate, obviously. It’s either four or five of us are wrong or he’s wrong because he’s pissed off everyone. Just disappointing.

“That was unfortunate, and Matt was nearly out of his car and (Keselowski) just plowed into Matt, and then ran into Tony and then he went in through the garage and cleared out transmissions and did burnouts in the garage and just acting like a dumb (expletive) instead of a champion.”

“Besides the race, he (Keselowski) knew I was out there and on that restart wrecked me,” Kenseth said. “I guess I shouldn’t have went out there. Really the safety — he was doing something with Denny there, and I don’t know if he was mad at him. I had my HANS off and my seatbelt’s off and he clobbers me at like 50 (mph). With the accidents and stuff that we’ve had around here — the race is over and we’re trying to come back to pit road. If he wants to come and talk about it like a man, then go do that — but to try and wreck somebody on the racetrack and to come down pit road with other cars and people standing around with seatbelts off and drive into the side of me is just inexcusable. There is no excuse for that. He’s a champion and he’s supposed to know better than that.”

Jeff Gordon and Harvick both said the fact that Kenseth was that fired up and angry spoke volumes.

“When you see Matt Kenseth want to fight, you know it’s intense,” Harvick said, adding that Kenseth’s reaction shows “NASCAR has done the right thing with this format.”

Gordon was a little more reserved in his comments, but added, “Obviously, there was some built up animosity towards Brad. I better hold the rest of my thoughts back.”

Kenseth and Keselowski have a history together, one that showed up earlier in the race when Kenseth clipped Keselowski on a Lap 272 restart. That resulting contact hindered Keselowski, but really hurt Kenseth, who dropped from fourth to 18th in a matter of laps. Kenseth was also critical of Keselowski’s driving at Talladega in May, when the Team Penske driver was six laps down and sparked the “Big One,” a 14-car crash.

What angered Keselowski on this night was what he said Kenseth did right before the final restart on Lap 333.

“When he came by he swung at my car and tore the whole right-front off of it,” Keselowski said. “When we restarted fifth with no right-front on it, we fell all the way back to 16th and it ruined our day. That gave us a big Chase hurt, which is unfortunate, and then for some reason after the race the 11 stopped in front of me and tried to pick a fight, so I don’t know what’s up with that. And he swung and hit my car and I figured if we are going to play car wars, I’ll join too. You know those guys can dish it out but they can’t take. And I give it back to them and now they want to fight.”

As for the contact with Stewart, Keselowski said, “I don’t think Tony knew what was going on. He is upset and he has every right to be. His car was tore up. There was a whole lot of other stuff going on, I’m sure when he sees the whole situation, he will understand.”

NASCAR is reviewing the incidents that took place at the end of the race and immediately after.

NASCAR’s Senior Vice President of Competition Robin Pemberton said that Keselowski was asked to come in to give his take of what happened. A crew member of the No. 20, mechanic Jesse Sanders, and Kenseth’s crew chief, Jason Ratcliff, also came in.

“As always, we will look at everything, we’ll continue to gather the facts, the tapes and the video and things of that nature,” Pemberton said. “Talk to some other people that were around, and we’ll work on that and we’ll come up with something by Tuesday or something, like we normally do.”

Of the drivers involved in the post-race drama, Hamlin is sitting in the best shape with a ninth-place finish, putting him seventh in the standings and in position to advance to the Eliminator Round.

Kenseth, who finished 19th, had a rough night altogether after having to start at the back for an unapproved adjustment. He is currently in ninth place, just one point outside of the eighth and final position to make it into the next round of the Chase.

Keselowski is in the worst spot of the four, in 10th place following a 16th-place finish at Charlotte, where he was the defending victor and in the top 10 for much of the night. He almost definitely needs a win in the GEICO 500 at Talladega Superspeedway next Sunday (2 p.m. ET, ESPN) to advance to the Eliminator Round. Hamlin, for one, expects more shenanigans as the No. 2 driver tries to get there.

“My guess is he will probably try to wreck everyone. It’s his only shot. So, he’ll just be out of control like normal,” the Joe Gibbs Racing driver said.

“We’ll do what we have to do to get in and that’s big picture. Luckily, it didn’t cause us to wreck. If it would have caused us to wreck, I’d be waiting for him right now.”

Brian France Wants Everyone to be a NASCAR Fan